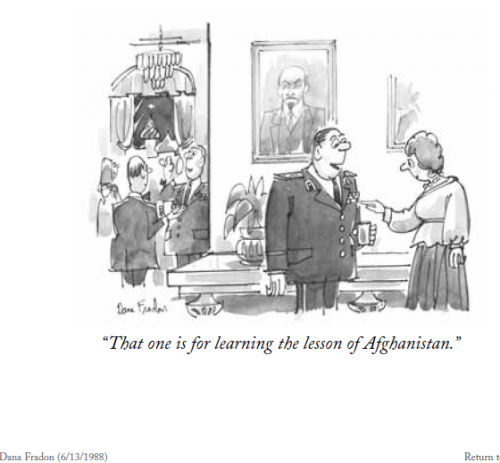 The U.S. military tried to cover up the Taliban’s shooting of a U.S. general on Thursday in Kandahar. What other Afghan debacles is the Pentagon hiding?

Here’s a 2009 piece I did for Counterpunch and the Future of Freedom Foundation on the lies that permeated the first 8 years of the Afghan war.  The New Yorker cartoon at the left is from 1988. Unfortunately, Washington didn’t learn.

It seems like only yesterday that President George W. Bush was bragging about having given “freedom and democracy” to 25 million Afghans.  This was a key theme of his second inaugural address, and it  helped Bush preen as the conqueror of the world.

For 8 years, the American people have been fed one big lie after another regarding Afghanistan.   Now, when the Pentagon is saber-rattling to vastly increase the number of U.S. troops sent there,   a refresher course on the Biggest Lies is in order.

In his State of the Union address on January 29, 2002, Bush frightened Americans with a bogus nuclear threat: “Our discoveries in Afghanistan confirmed our worst fears. . . . We have found diagrams of American nuclear power plants and public water facilities” in caves used by Al Qaeda.

Senior CIA and FBI officials followed up with “background” briefings to the media, revving up the threat that Afghan-based Al Qaeda fighters were targeting U.S. nuclear power facilities. This made the terrorist threat far more ominous and spurred support for Bush’s preemptive war policy against Iraq.

Two years later, Bush administration officials admitted that the president’s statement was completely false and that no nuclear power plant diagrams had been discovered in Afghanistan. Nuclear Regulatory Commissioner Edward McGaffigan, who had testified in 2002 on this falsehood at closed hearings on Capitol Hill, commented that Bush was “poorly served by a speechwriter.” This was a farce – as if the deceit stemmed from some speechwriter’s poetic fancy – as opposed to the conniving of a phalanx of high-ranking officials.

Pat Tillman was a star defensive back for the Arizona Cardinals who, in the wake of 9/11, turned down a multimillion dollar contract extension to enlist as an Army Ranger.  Tillman was the highest profile military recruit of the Bush era.

Tillman was killed in Afghanistan on April 22, 2004. Within minutes of his demise, it was clear he had been slain by fellow soldiers.  The Pentagon responded with an information lockdown -cutting off all communication to the military base where Tillman had been stationed.

A week after Tillman’s death, Maj. Gen. Stanley McChrystal, then a top commander in Afghanistan, notified the White House that Tillman was killed by U.S. troops: “I felt that it was essential that you received this information as soon as we detected it to preclude any unknowing statements by our country’s leaders that might cause public embarrassment if the circumstances of CPL Tillman’s death become public.” The same day McChrystal sent his memo, the Pentagon announced that Tillman had received a posthumous Silver Star and was killed while leading an attack on Al Qaeda forces. Pentagon emails referred to the “Silver Star Game Plan” (to distract attention from the “friendly fire” killing).

On May 1, 2004, Bush exploited Tillman’s death for the finale of his speech at the White House Correspondents Dinner.  The Pentagon and White House delayed admitting that Tillman had been killed by Americans until after a high-profile memorial service rallied public support for the war and Bush’s policies.

The Bush administration perennially claimed that the U.S. invasion in 2001 resulted in “freedom” for Afghan women.   But women in many parts of Afghanistan continue to be oppressed even worse than characters in American country music songs.  Afghan President Hamid Karzai recently approved a new law in August that entitles a husband to starve his wife if she refuses his sexual demands.

Both Bush and Obama touted the U.S. occupation of Afghanistan as promoting democracy. But the election in August showed Afghan democracy as an onion-layer of frauds.  Peter Galbraith, a top United Nations official in Afghanistan, estimated that a third of Karzai’s votes may have been bogus.  (He was fired after he refused to muzzle himself).

Some Obama administration officials probably cringed at the scale of the Karzai’s conniving. But it is only a question of time until we are again told about our duty to defend democracy in Kabul. The elections did not fool the Afghan people: they know Karzai is an American puppet. But the election may help the U.S. government con slow-witted Americans into believing  the war has a redeeming purpose.

There is no reason to expect the U.S. government to ever become trustworthy on Afghanistan.   At best, Washington will rotate its lies, the same way it rotates the National Guard units sent to the Afghan badlands.  Americans need to recognize that, once their government commences warring, truth will be target number one.

One Response to Endless U.S. Government Lies on the Afghanistan War