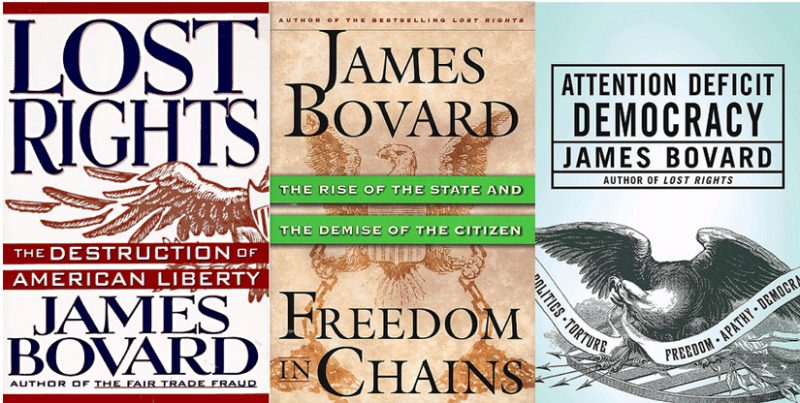 Here’s a round-up of my epigrams on voting from my books and articles since 1993:

*Nowadays, we have elections in lieu of freedom.

*What government abuses and crimes can we expect to cease as a result of 100 million people voting today?

*A successful politician is often merely someone who conned more voters than the other liar on the ballot.

*Instead of revealing the “will of the people,” election results are often only a one-day snapshot of transient mass delusions.

*Voting is far more likely to sanctify politicians’ power than to curb their abuses.

*The more confused people’s political thinking becomes, the easier it is for rulers to invoke democracy to destroy freedom.

*Federal secrecy is ravaging American democracy. There is no such thing as retroactive self-government.

*In politics, ‘positive thinking’ is often a slave’s virtue that deludes people about the chains placed upon them.

*If rulers are above the law, citizens have the same freedom that slaves had on days when their masters chose not to beat them.

*Attention Deficit Democracy begets the arrogance and ignorance that paves the way to political collapse. [

*Equating democracy with liberty is as foolish as equating monarchs with God.

*Voting is often simply a political lottery ticket promising something for nothing.

*Modern democracy presumes that people can control what they do not understand.

*Democracy must be something more than two wolves and a sheep voting on what to have for dinner.

*Paternalism is a desperate gamble that lying politicians will honestly care for those who fall under their power.

*A lie that is accepted by a sufficient number of ignorant voters becomes a political truth.

*Truth is a lagging indicator in politics.

*The arrogance of power is the best hope for the survival of freedom.

*We need a constitutional amendment to make the federal government obey the Constitution.

*Rather than a democracy, we increasingly have an elective dictatorship in which people merely choose who will ravage the laws and the Constitution.

*We now have a political system which is nominally democratic but increasingly authoritarian.

*Trumpeting the importance of voting deludes people into thinking that they have a leash on the government.

*Voting is far more likely to sanctify politicians’ power than to curb their abuses.

*The worst violation of voting rights occurs when election winners trample the law and the Constitution.

*Voting often means trusting one’s life, liberty, & property to one of two candidates, neither of whom is trustworthy.

Americans are far more likely to be deluded on Election Day by their own government than by foreigners.

Obama helped establish an Impunity Democracy in which rulers pay no price for their misdeeds.

Justice Dept. will alert Americans to foreign attempts to “subvert democracy” but there will still be no warnings for subversion by U.S. government agencies

We hear "government is us" but private citizens have no idea what the hell is going on in the White House regarding Syria. We have democracy except for vast killing abroad in our name.

Self-government and democracy are a farce when the US govt. claims it is entitled to total secrecy for the legal rationales for attacking a foreign nation https://t.co/P0AMuRxrEu

Federal secrecy is ravaging American democracy. We know little or nothing about U.S. foreign wars. But there is no such thing as retroactive self-government. https://t.co/lhtL864Q6O

Justice Dept. will alert Americans to foreign attempts to "subvert democracy" but there will still be no warnings for subversion by U.S. government agencies https://t.co/dT0TzsA1qc

My Hill oped: George W. Bush is hailed nowadays but when he was president, he acted as if spreading democracy gave him a license to kill https://t.co/fmaD0rUZm6

From heresy to conventional wisdom? Excellent NYTimes series of articles on crisis of democracy leads with my quote: "Democracy must be something more than two wolves and a sheep voting on what to have for dinner." https://t.co/nlrGuQqB4r

The #IGReport reveals the vast sway that federal agencies seek over what Americans are permitted to know. But democracy is a mirage when governments blindfold citizens. https://t.co/JWZNpczjyX

Trump is exposing the sham of a Leviathan Democracy which pretends presidents will be philosopher kings — instead of merely talented vote catchers https://t.co/Sb5DrL8S4Y

WashPost articles proposes fixing democracy by conscripting young people for 3 years to teach them how "to share our toys" https://t.co/uJUAcaov1Q

Wilson dragged the US into WWI, destroying freedom, sowing carnage, & failing to make democracy safe for the worldhttps://t.co/RDqCk7IKA6

Is American democracy in a death spiral? The belief in American exceptionalism blinds many people to the growing political decay.