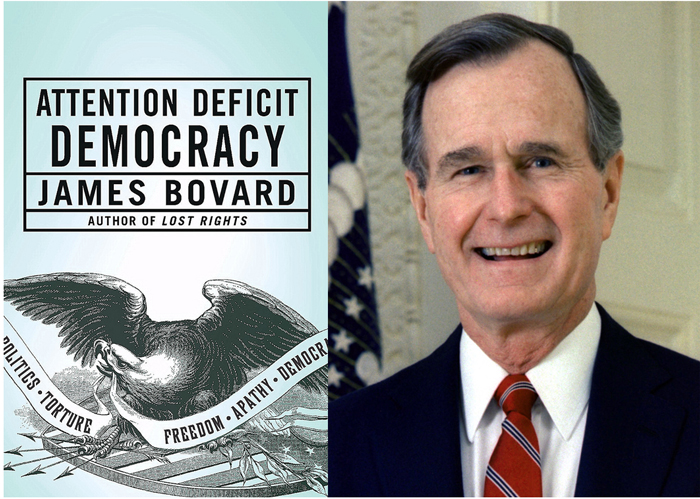 The late George H.W. Bush is being lauded as a visionary statesman.  We should not forget that he justified the first Gulf War to restore Kuwait’s “rightful rulers to their place.”   Why should Americans give a damn which Arab dictators control which patches of sand (and oil)?

Here’s a 2008 article I did (derived from Attention Deficit Democracy) on warring and lying in U.S. history.

Americans are taught to expect their elected leaders to be relatively honest. But it wasn’t always like that. In the mid 1800s, people joked about political candidates who claimed to have been born in a log cabin that they built with their own hands. This jibe was spurred by William Henry Harrison’s false claim of a log-cabin birth in the 1840 presidential campaign.

Americans were less naive about dishonest politicians in the first century after this nation’s founding. But that still did not deter presidents from conjuring up wars. Presidential deceits on foreign policy have filled cemeteries across the land. George W. Bush’s deceits on the road to war with Iraq fit a long pattern of brazen charades.

In 1846, James K. Polk took Americans to war after falsely proclaiming that the Mexican army had crossed the U.S. border and attacked a U.S. army outpost — “shedding the blood of our citizens on our own soil.” Though Polk refused to provide any details of where the attack occurred, the accusation swayed enough members of Congress to declare war against Mexico. Congressman Abraham Lincoln vigorously attacked Polk for his deceits. But Lincoln may have studied Polk’s methods, since they helped him whip up war fever 15 years later.

In 1917, Woodrow Wilson took the nation to war in a speech to Congress that contained one howler after another. He proclaimed that “self-governed nations do not fill their neighbor states with spies” — despite the role of the British secret service and propaganda operations in the prior years to breed war fever in the United States. Wilson hailed Russia as a nation that had always been “democratic at heart” — less than a month after the fall of the tsar and not long before the Bolshevik Revolution. He proclaimed that the government would show its friendship and affection for German-Americans at home — but his administration was soon spearheading loyalty drives that spread terror in many communities across the land.

In 1940, in one of his final speeches of the presidential campaign, Franklin Roosevelt assured voters, “Your president says this country is not going to war.” At the time, he was violating the Neutrality Act by providing massive military assistance to Britain and was searching high and low for a way to take the United States into war against Hitler.

In his 1944 State of the Union address, Roosevelt denounced those Americans with “such suspicious souls — who feared that I have made ‘commitments’ for the future which might pledge this Nation to secret treaties” at the summit of Allied leaders in Tehran the previous month. In early 1945, Roosevelt told Congress that the Yalta Agreement “spells the end of the system of unilateral action and exclusive alliance and spheres of influence.” In reality, he signed off on Soviet domination of Eastern Europe and the crushing of any hopes for democracy in Poland.

In August 1945, Harry Truman announced to the world that “the first atomic bomb was dropped on Hiroshima, a military base. That was because we wished in this first attack to avoid, in so far as possible, the killing of civilians.” Hiroshima was actually a major city with more than a third of a million people prior to its incineration. But Truman’s lie helped soften the initial impact on the American public of the first use of the atomic bomb. (The U.S. government also vigorously censored photographs of Hiroshima and its maimed survivors.)

Presidential and other government lies on foreign policy are often discounted because they are presumed to be motivated by national security. But as Hannah Arendt noted in an essay on the Pentagon Papers, during the Vietnam War, “The policy of lying was hardly ever aimed at the enemy but chiefly if not exclusively destined for domestic consumption, for propaganda at home and especially for the purpose of deceiving Congress.”

CIA analysts did excellent work in the early period of the Vietnam conflict. But “in the contest between public statements, always over-optimistic, and the truthful reports of the intelligence community, persistently bleak and ominous, the public statements were likely to win simply because they were public,” Arendt commented. The truth never had a chance when it did not serve Lyndon Johnson’s political calculations.

Vietnam destroyed the credibility of both Lyndon Johnson and the American military. Yet the memory of the pervasive lies of the military establishment did not curb the gullibility of many people for fresh government-created falsehoods a decade or so later.

During the 1980s, the U.S. State Department ran a propaganda campaign that placed numerous articles in the U.S. media praising the Nicaraguan Contras and attacking the Sandinista regime. As the Christian Science Monitor noted in 2002, the State Department “fed the Miami Herald a make-believe story that the Soviet Union had given chemical weapons to the Sandinistas. Another tale, which happened to emerge the night of President Ronald Reagan’s reelection victory, held that Soviet MiG fighters were on their way to Nicaragua.” The General Accounting Office investigated and concluded that the State Department operation was illegal, consisting of “prohibited, covert propaganda activities.” There was no backlash against the government when the frauds were disclosed. Instead, it was on to the next scam.

Reagan paved the way for subsequent presidents in immersing anti-terrorist policy in swamps of falsehoods. In October 1983, a month after he authorized U.S. Marine commanders to call in air strikes against Muslims to help the Christian forces in Lebanon’s civil war, a Muslim suicide bomber devastated a U.S. Marine barracks in Beirut, killing 242 Americans. In a televised speech a few days later, Reagan portrayed the attack as unstoppable, falsely claiming that the truck “crashed through a series of barriers, including a chain-link fence and barbed-wire entanglements. The guards opened fire, but it was too late.” In reality, the guards did not fire because they were prohibited from having loaded weapons — one of many pathetic failures of defense that the Reagan administration sought to sweep under the carpet.

In 1984, after the second successful devastating attack in 18 months against a poorly defended U.S. embassy in Lebanon, Reagan blamed the debacle on his predecessor and falsely asserted that the Carter administration had “to a large extent” gotten “rid of our intelligence agents.” A few days later, while campaigning for reelection, Reagan announced that the second embassy bombing was no longer an issue: “We’ve had an investigation. There was no evidence of any carelessness or anyone not performing their duty.” However, the Reagan administration had not yet begun a formal investigation.

On May 4, 1986, Reagan bragged, “The United States gives terrorists no rewards and no guarantees. We make no concessions; we make no deals.” But the Iranian arms-for-hostage deal that leaked out later that year blew such claims to smithereens. On November 13, 1986, Reagan denied initial reports of the scandal, proclaiming that the “‘no concessions’ [to terrorists] policy remains in force, in spite of the wildly speculative and false stories about arms for hostages and alleged ransom payments. We did not — repeat — did not trade weapons or anything else for hostages nor will we.” But Americans later learned that the United States had sold 2,000 anti-tank weapons to the Iranian government “in return for promises to release the American hostages there. Money from the sale of those weapons went to support the Contras’ war in Nicaragua,” as Mother Jones magazine noted in 1998.

Saddam Hussein’s invasion of Kuwait in the summer of 1990 provided a challenge for the first Bush administration to get Americans mobilized. In September 1990, the Pentagon announced that up to a quarter million Iraqi troops were near the border of Saudi Arabia, threatening to give Saddam Hussein a stranglehold on one of the world’s most important oil sources. The Pentagon based its claim on satellite images that it refused to disclose. One American paper, the St. Petersburg Times, purchased two Soviet satellite “images taken of that same area at the same time that revealed that there were no Iraqi troops ‘near the Saudi border — just empty desert.’” Jean Heller, the journalist who broke the story, commented, “That [Iraqi buildup] was the whole justification for Bush sending troops in there, and it just didn’t exist.” Even a decade after the first Gulf war, the Pentagon refused to disclose the secret photos that justified sending half a million American troops into harm’s way.

Support for the war was also whipped up by the congressional testimony of a Kuwaiti teenager who claimed she had seen Iraqi soldiers removing hundreds of babies from incubators in Kuwaiti hospitals and leaving them on the floor to die. George H.W. Bush often invoked the incubator tale to justify the war, proclaiming that the “ghastly atrocities” were akin to “Hitler revisited.” After the United States commenced bombing Iraq, it transpired that the woman who testified was the daughter of the Kuwaiti ambassador and that her story was a complete fabrication, concocted in part by a U.S. public relations firm. Dead babies were a more effective selling point than one of the initial justifications Bush announced for U.S. intervention — restoring Kuwait’s “rightful leaders to their place” — as if any Americans seriously cared about putting Arab oligarchs back on their throne. (A few months before Saddam’s invasion, Amnesty International condemned the Kuwaiti government for torturing detainees.)

Bill Clinton’s unprovoked war against Serbia was sold to Americans with preposterous tales of the Kosovo Liberation Army’s being freedom fighters, with absurd claims that a civil war in one corner of southeastern Europe threatened to engulf the entire continent in conflict, with wild and unsubstantiated claims of an ongoing genocide, and with a deluge of lies that the U.S. military was not targeting Serb civilians.

Lying and warring appear to be two sides of the same coin. Unfortunately, many Americans continue to be gullible when presidents claim a need to commence killing foreigners. It remains to be seen whether the citizenry is corrigible on this life-and-death issue.

James Bovard is the author of Attention Deficit Democracy [2006] as well as The Bush Betrayal [2004], Lost Rights [1994] and Terrorism and Tyranny: Trampling Freedom, Justice and Peace to Rid the World of Evil (Palgrave-Macmillan, September 2003).