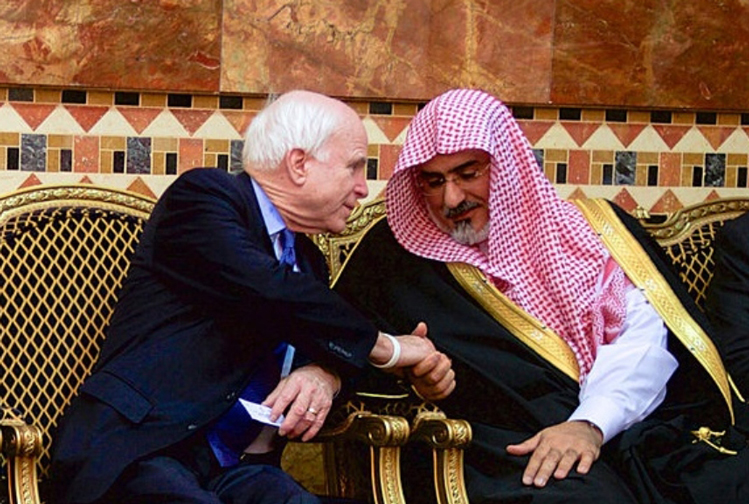 When Sen. John McCain passed away in August, he was lauded far and wide for his long career of public service. Rep. John Lewis, the famous civil-rights activist, hailed McCain as a “warrior for peace.” In reality, McCain embodied a toxic mix of moralism and militarism that worked out disastrously for America and the world.

In his funeral eulogies, McCain was portrayed as a hero and a visionary. But early in his congressional career, he barely avoided indictment as part of the Keating Five Savings and Loan bribery scandal that cost taxpayers billions of dollars. McCain repaired his image by becoming a champion of campaign-finance reform and new restrictions on political contributions. In 2002, Congress enacted the McCain-Feingold Bipartisan Campaign Reform Act, which proved more effective at suppressing criticism than at reforming political life. The McCain-Feingold Act authorized harsh penalties for private citizens who accused their rulers of abusing their power. It prohibited most issue ads by private groups on television or radio in the months before a presidential or congressional election.

In 2003, the Supreme Court (by a 5-4 margin) upheld the new law in response to activities with “a significant risk of actual and apparent corruption.” Justice Antonin Scalia noted in a dissent to the decision upholding the law, that the McCain-Feingold act “cuts to the heart of what the First Amendment is meant to protect: the right to criticize the government.” But that was fine with McCain, since he declared that if he had the power, he would outlaw all negative political ads. He declared, “I detest the negative advertising. I think it is one of the worst things that has ever happened in American politics.” Banning negative ads but not political lies was McCain’s notion of a level playing field.

When he was awarded the Liberty Medal in October 2017 at the National Constitution Center in Philadelphia, Senator McCain declared, “We live in a land made of ideals…. We are the custodians of those ideals at home, and their champion abroad. We have done great good in the world.” He warned that it would be “unpatriotic” to “abandon the ideals we have advanced around the globe.” But idealism has fared better in political speeches than in the lives of American soldiers or supposed foreign beneficiaries.

McCain served 25 years as the chairman of the International Republican Institute, a federally funded entity that intervenes in foreign elections to promote pro-American candidates. McCain often spoke as if the institute was the incarnation of America at its best. In 1997, McCain declared, “When we provide the democratic opposition in Albania with 12 Jeep Cherokees and they win an election, I’m incredibly proud.” However, the Institute was involved in violent attempts to overthrow governments in Venezuela and Haiti and was condemned for meddling in many other places. As long as pro-American candidates snared the most votes by hook or by crook, McCain had no complaints.

During the 1990s, McCain “slowly moved toward the idealist camp and became one of his party’s foremost advocates for the use of force abroad,” the Boston Globe noted. In his 2000 presidential campaign, he pledged a “rogue state rollback,” which sounded like “fill-in-the-blank” declarations of war against any regime of which the United States disapproved. He was defeated in the Republican primaries by George W. Bush, who sounded reasonable and moderate in comparison. However, after 9/11 Bush adopted McCain’s bellicose vision and promised to “rid the world of evil.”

McCain was one of the foremost advocates for attacking Iraq and served as honorary co-chairman of the Committee for the Liberation of Iraq. In 2002, he declared that invading that nation would be “fairly easy” and that “we can win an overwhelming victory in a very short period of time.” Two months after the fall of Baghdad, McCain proclaimed that the war was “fully vindicated.” After the war became a debacle, he declared in 2008 that it was “fine with me” to keep U.S. troops in Iraq for “a hundred years.”

McCain believed Americans should idealize military interventions regardless of the political machinations that preceded them. When Bush created a pseudo-independent commission in 2004 to exonerate him for the missing weapons of mass destruction in Iraq, he selected McCain as one of the nine members. On the day his appointment was announced, McCain publicly declared, “The president of the United States, I believe, would not manipulate any kind of information for political gain or otherwise.” McCain’s boundless endorsement of the current president ignored the legendary presidential deceits that trademarked the Mexican-American War, the Spanish-American War of 1898, the First World War, and the Vietnam War.

McCain loved to strut on foreign trips where American reporters were sure to hail him as a visiting savior. He was ridiculed as “the new Baghdad Bob” who took a “magic carpet ride” after he visited a Baghdad market in 2007 and claimed, “Never have I been able to go out into the city as I was today.” McCain touted his visit: “We stopped at a local market, where we spent well over an hour, shopping and talking with the local people, getting their views and ideas about different issues of the day.” Rep. (now Vice President) Mike Pence, who accompanied McCain, ludicrously asserted that the scene was “just like any open-air market in Indiana in the summertime.” At the time of his market visit, McCain was wearing a flak jacket, accompanied by 100 U.S. troops, and protected overhead by attack helicopters. Prior to McCain’s arrival, U.S. troops cleared almost everyone else at the scene. After he departed, Iraqi merchants bitterly scoffed at his claims that the market was safe. One shop owner growled, “They paralyzed the market when they came. This was only for the media. This will not change anything.”

But the American media lapped it up and the charade did nothing to prevent McCain from securing the Republican presidential nomination the following year. The shining moment of his campaign was his proclamation, “We are all Georgians now!” in response to a border clash that the Republic of Georgia commenced against the Russian Federation. McCain’s bellicosity against Russia never died. He also proclaimed during that campaign, “I know how to win wars. And if I’m elected president, I will turn around the war in Afghanistan, just as we have turned around the war in Iraq, with a comprehensive strategy for victory.” McCain never explained how he learned how to win wars (not a lesson taught in North Vietnamese prisons) or why he advocated bombing more than a dozen nations throughout his congressional career.

Perhaps the only lesson McCain learned from the Iraq War was that the American media would unquestioningly glorify him for demanding foreign intervention. In 2011, he was outspoken demanding U.S. bombing of Libya — widely considered the biggest foreign-policy blunder of the Obama administration. In April 2011, he visited rebels in Benghazi and labeled them heroes. Yet, as a Wikileaks disclosure revealed, he had sung a different tune two years earlier when he visited Tripoli. Meeting with officials of Muammar Qaddafi’s regime, McCain “pledged to see what he could do to move things forward in Congress” regarding a Libyan request for U.S. military equipment, according to a confidential U.S. embassy cable. After the United States helped topple the Qaddafi regime, chaos erupted and four Americans, including the U.S. ambassador, were killed in Benghazi. A few years later, slave markets were operating in the nation that McCain and Obama had so proudly liberated.

McCain returned to the Middle East for an encore visit with Syrian rebels in 2013, whom he then ceaselessly championed as a moderate alternative to the regime of Bashar Assad. Under pressure from McCain and others, the Obama administration provided massive military aid to anti-Assad forces, but much of the weaponry ended up in the hands of terrorist groups. The absurdity of U.S. policy became undeniable when Pentagon-backed Syrian rebels openly battled CIA-backed rebels. That did not deter McCain from endless pious preening, such as his early 2017 tweet: “On 6th anniversary of Syrian civil war, Assad & Russia cont. to commit genocide — when will the world wake up to the slaughter in Syria?” Since McCain had used the word “genocide,” that meant the U.S. government was morally obliged to topple the Assad regime — even though Libya showed the catastrophic results of intervention. A year later, McCain wailed, “For seven long years, the United States has sat idly by in the face of genocide. We seem to have become immune to images of devastation and brutality coming out of Syria every day. Two successive U.S. administrations have failed to do anything meaningful to stop the slaughter and enabled Assad’s reign of terror to thrive.” Actually, the U.S. government had dropped tens of thousands of bombs and missiles on Syria, despite not having a dog in that fight. Donald Trump twice sent cruise missile barrages against the Assad government after unproven allegations were made that the government had used chemical weapons. (The al-Qaeda-linked terrorist groups fighting Assad were also frequently accused of using chemical weapons.)

Most of the media ignored McCain’s role in making the Syrian conflict longer and bloodier than it otherwise would have been. That is no surprise, since American politicians across the board are perennially absolved by the ideals they invoke when championing foreign wars. But the moral bonus points are void beyond the national borders. Idealistic pretenses can spur vast resentment because “the American judges himself by the way he feels, whereas the foreigner judges him by what he does,” as Irving Babbitt explained after World War One.

There are plenty of nasty dictators in the world but U.S. government efforts have dismally failed to spread democracy this century. John McCain was in the forefront of prominent Americans who had “learned nothing and forgotten nothing” from recent U.S. pratfalls. Instead, he continued talking as if foreign interventions could be a deft blend of Jesus and General Sherman, righteously burning a swath through Georgia.

America cannot afford an idealism that consists of little more than combining bombing and wishful thinking. We should not forget the Americans, Iraqis, Syrians, and Libyans who died in part because of policies McCain championed. The most valuable lesson from McCain’s career is to reject the folly of militarized idealism.

This article was originally published in the December 2018 edition of Future of Freedom.