OK, so maybe I didn’t read many of the articles in my father’s copies of Playboy in the 1960s and early 1970s, but I always read the cartoons. My favorite cartoonist was Gahan Wilson, who passed away earlier this week at the age of 89. 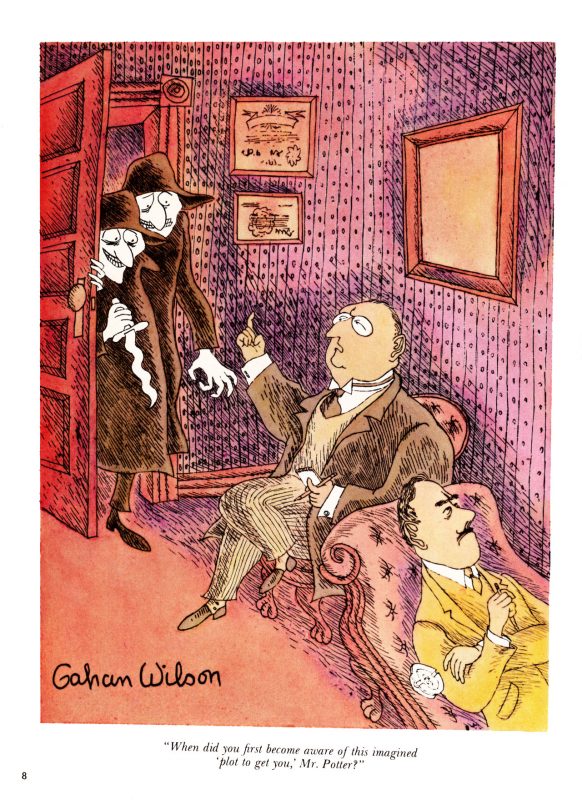 Wilson’s cartoons combined brilliant wit and a great Bullshit Detector. He aptly described his own work as showing “a positive reaction to hopelessness.” He could perceive and expose the absurdities and shams of modern existence and still provoke horse laughs through it all.

Wilson also had a knack for revealing the tawdry reality around the corner. One of my favorite cartoons shows a smiling boy behind a little stand and a homemade sign touting 5 cent ‘iced drinks.’ A bulky guy with a fedora hat with coat slung over his shoulder happily chugs down a glass. Just around the corner, a previous customer is on his knees gasping, his bulging eyes staring at an impish kid behind a ramshackle stand with a sign, ‘Iced Drink Antidote, $1.’’ Antidotes were a lot cheaper in the 1960s.

Another classic Wilson cartoon featured a psychiatrist asking a patient stretched out on his couch: “When did you first become aware of this imagined plot to get you?” the shrink asks as he motions to two men with long knives sneaking into the room. That sketch is a wonderful reminder that just because you’re paranoid doesn’t mean that they aren’t out to get you. (He did a great New Yorker cartoon of a frustrated FBI sniper team that keeps getting spotted because of their brazen FBI logos.)

Wilson took some deft jabs at military madness over the years. One Playboy cartoon shows a shell-shocked soldier holding a bloody knife and an assault rifle, looking at complete devastation all around him and smilingly declaring, “I think I won!” Another one shows a “Dr. Strangelove” type scene featuring a politician asking a military officer as they stand next to a table with an illuminated map: “You mean what we did just then was an actual war?”

I met Wilson ten years ago at the Small Press Expo cartoonist show in Bethesda, Maryland. He was scheduled to give a talk and was a bit uncertain of finding the lecture room in that cavernous Marriott hotel. I walked up, mentioned that I knew where he was speaking, and chatted for a pleasant five or ten minutes as we headed to the venue. I mentioned that he probably knew the Playboy Forum editor I had worked with for eight years, and the gist of his reply was “that’s nice.” He may have thought I was full of crap but he had the “very pleasant gentleness” that he ascribed to cartoonists as a class.

His spiel was far and away the highlight of that cartoonist show (captured at the YouTube link below). When he was a youngster, his family lived in the apartment next to that of one of the Chicago Tribune editors. After he acquired an early tape recording device, he would get invited to the parties and would openly tape big wigs getting drunk and making fools of themselves. He said it was very helpful for “at an early age, seeing world leaders revealing themselves to be idiots.”

Wilson recounted about how, after serving in the Air Force and graduating from the Art Institute of Chicago, he moved to Greenwich Village in the 1950s and traipsed around to magazines to show his cartoon portfolio. One editor laughed out loud repeatedly while looking at them but then announced, “Great cartoons, kid – but our readers wouldn’t understand them.” The New York Times obituary notes that Wilson “settled into a spartan 1950s bohemian life in New York, trying to break in but mostly accumulating rejections.” Wilson explained in 1982: “Dealing with poverty wasn’t the biggest barrier of my career. The hump was dealing with the emotional part of rejection. You have to say, ‘I will not accept it,’ and go on.”

Even after he became a famous cartoonist from the 1960s onward, he said that a lot of his cartoons never did sell. He also declared: ‘Luck is tremendous in the freelance version of art – I’ve known lots of people who should have made it but they had lousy luck.’

Wilson thrived because he paid attention to what editors wanted. During the question and answer period for that 2009 spiel, someone asked him about having to adjust his style or humor for the different markets (Playboy, New Yorker, etc.) “It is like going to a party,” Wilson replied. “It is important to know who is throwing it, what they want to talk about, who the guests will be, what they will be wearing,” as a way of targeting his work. He talked about getting a very different mindset depending on which market he was targeting. “It is all very calculating.” Wilson “calculated” and succeeded in placing superb humor and art in a vast array of markets.

I asked if he thought editors have become more dim-witted as far as catching humor over the past 50 years. He said he didn’t think so. I muttered but asked no follow-up.

Wilson brought joy to millions of people for more than half a century and helped people laugh even at the Valley of the Shadow of Death.  His work and memory should be hailed by anyone who loves life despite “the slings and arrows of outrageous fortune.” 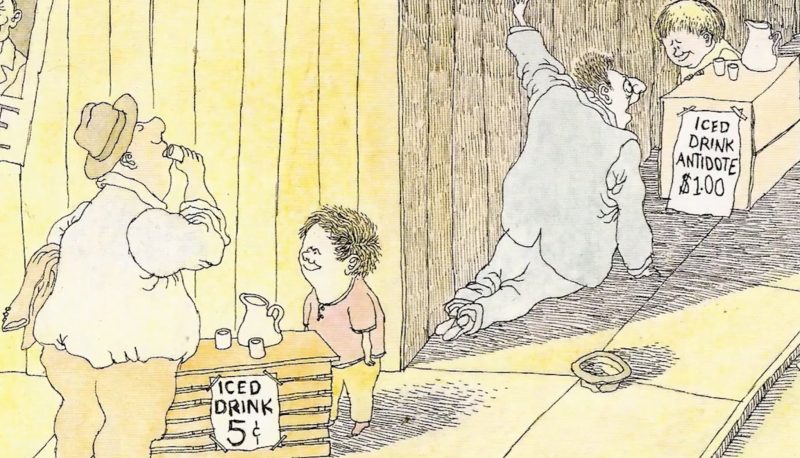 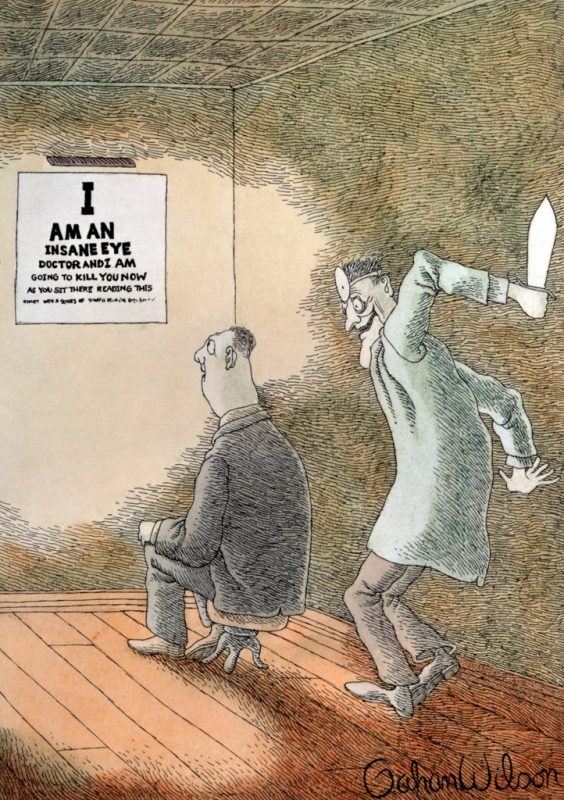 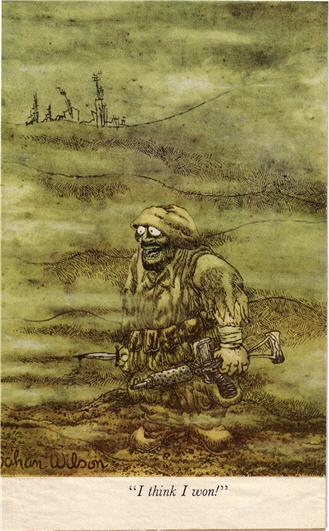