School shootings have become the latest pretext for politicians to destroy the Second Amendment. Mayor Pete Buttigieg of South Bend, Indiana, declared in a Democratic presidential candidates’ debate, “I was part of the first generation that saw routine school shootings. We have now produced the second school-shooting generation in this country. We dare not allow there to be a third.” Another Democratic presidential candidate, Rep. Eric Swalwell (D-Cal.), invoked school shootings to justify confiscating millions of firearms across the nation: “It’s not just the violence that they’ve caused; it’s the fear, the immeasurable fear that our children live in because they are still on our streets. I want to get rid of that fear.”

In reality, despite a tidal wave of misleading propaganda, the number of school shootings has fallen sharply over the past 30 years. But anti-gun activists in government and the media have done their best to persuade people otherwise.

Last year, the federal Education Department reported that “nearly 240 schools … reported at least 1 incident involving a school-related shooting” in the 2015-16 school year. National Public Radio investigated and found that the feds had exaggerated school shootings by twentyfold; NPR could confirm only 11 incidents. Cleveland was credited with 37 shooting incidents, when in reality it was simply a report of 37 schools that noted “possession of a knife or a firearm.” In DeKalb County, Georgia, “a toy cap gun fired on a school bus” counted as a school shooting. One school system was listed as a shooting locale for an incident involving a pair of scissors. NPR noted,

Most of the school leaders NPR reached had little idea of how shootings got recorded for their schools. For example, the [federal Civil Rights Data Collection] reports 26 shootings within the Ventura Unified School District in Southern California. “I think someone pushed the wrong button,” said Jeff Davis, an assistant superintendent there. The outgoing superintendent, Joe Richards, “has been here for almost 30 years and he doesn’t remember any shooting,” Davis added.

Even the leftist news site Vox noted, “The risk of a child getting killed by someone else at school in 2011, the last year for which there’s final data, was about 1 in 5 million.” Vox again: The rate of “serious violent victimization” among students — rape, sexual assault, robbery, or aggravated assault — was about 1 in 1,000 in 2011, down from 1 in 100 in 1995. In 1995, 10 percent of students were victims of some kind of crime at school; in 2011, just 4 percent were.” Northeastern University criminologist James Alan Fox observed, “We over-obsess about school shootings. Surveys show the majority of students are afraid there will be a mass shooting at their school. These are rare events — scary though they may be, tragic though they may — and we shouldn’t over-respond.” 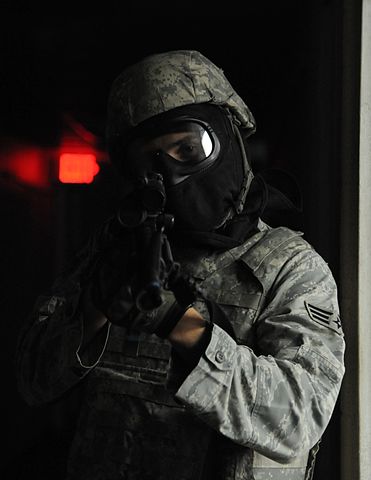 Good luck on your SATs!

But hard facts have proven no match for sustained hype for antigun activists. Police and schools have responded to the new paranoia with an array of drills that have been lame-brained even by government standards.

Last January, numerous Indiana elementary school teachers were shot as part of a “safe schools” training program. According to the Indiana State Teachers Association, sheriffs’ deputies ordered teachers “into a room four at a time, told them to crouch down and then shot them execution-style with pellets in rapid succession,” leaving several of them bloodied and many of them screaming. The union complained, “The teachers were terrified, but were told not to tell anyone what happened. Teachers waiting outside that heard the screaming were brought into the room four at a time and the shooting process was repeated.” The union is “is lobbying lawmakers to add [legislative] language prohibiting teachers from being shot with any sort of ammunition” during school-safety drills, according to the Indianapolis News.

Schools are “increasingly turning their hallways into an imitation of a real mass shooting, complete with police officers firing BB guns and drama students enlisted to play victims, made up with fake blood and bullet holes. Occasionally, the drills are sprung on teachers and students without warning,” as a student newspaper in Great Neck, New York, observed. A Pennsylvania teacher commented that she was “more traumatized than trained” after teachers were shot with airsoft guns by a fake active shooter. “We had colleagues shooting colleagues, we had people getting hit with [plastic] pellets.… People were screaming, trying to run. People were tripping over each other. It was just horrendous,” Elizabeth Yanelli recalled.

One of the primary beneficiaries of such nonsense is pharmaceutical companies that hustle anti-anxiety drugs to children. Former policeman Raeford Davis commented on lockdown/active shooter drills, “These simulated execution rituals are conducted for fear-based mass social control purposes to traumatize, instill fear, hopelessness, personal dis-empowerment, reliance on authority figures to save and protect you.” A 2018 Pew Research Center survey found that most “American teen-agers worry about a shooting at their school. This comes at a time when children are already suffering from sharply rising rates of anxiety, self-mutilation, and suicide. According to a landmark study funded by the National Institute of Mental Health, 32 percent of 13-to-18-year-olds have anxiety disorders, and 22 percent suffer from mental disorders that cause severe impairment or distress. Among those suffering from anxiety, the median age of onset is 6,” the Atlantic reported last year.

School-shooting paranoia first became widespread after the Columbine High School killings in 1999. Twelve students and one teacher died in a shooting spree by two students that helped inspire other subsequent school shootings, especially a Newtown, Connecticut, attack in 2012.

The Columbine killings set the precedent of maximum political exploitation of dead children. Attorney General Janet Reno praised the local police response as “extraordinary” and “a textbook” example of “how to do it the right way.” Bill Clinton declared that “we look with admiration at the … police officers who rushed to the scene to save lives.” Clinton invoked the Columbine killings almost every day from April 20 through mid June 1999, when the House of Representatives narrowly defeated Clinton-championed gun-control legislation. 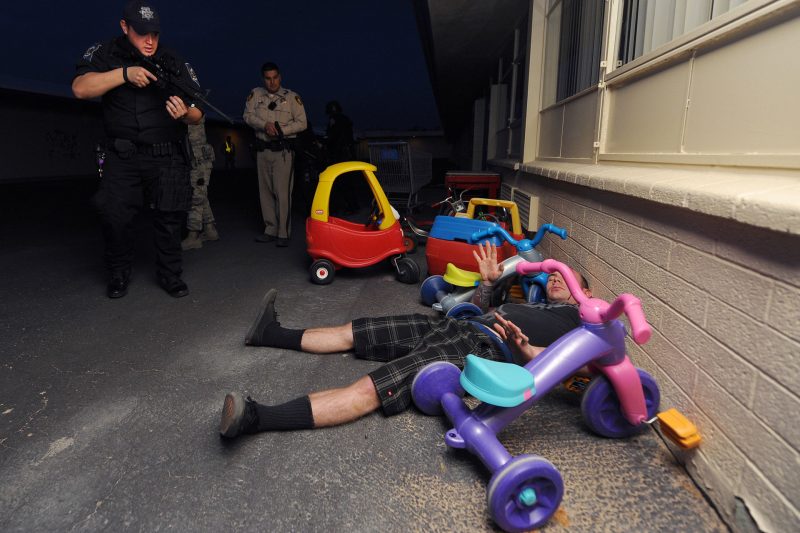 In reality, “No efforts were made to stop the assault,” concluded William Erickson, a former Colorado Supreme Court justice who headed a commission that issued a damning 2001 report on the Columbine killings. Instead, hundreds of police waited outside until long after the two perpetrators had committed suicide. Instead of going after the two killers, law enforcement set up a perimeter outside the school and waited “for the assault to end,” the report concluded.

Appalling police failures turned a multiple homicide into a historic massacre. A SWAT team had entered the building early on but Jefferson County Sheriff John Stone ordered it to withdraw. Police spokesmen said most of the SWAT teams were not sent in, “for fear that they might set off a new gunfight,” the New York Times reported. SWAT teams did not enter the room where the killers lay until hours after the shooting stopped. A badly wounded schoolteacher, Dave Sanders, bled to death because the SWAT team took four hours to reach the room he was in — even though students placed a large sign announcing “1 Bleeding to Death” in the window.

Fears for “officer safety” paralyzed the Colorado response. Steve Davis, spokesman for the Jefferson County Sheriff’s Department, said, “We had no idea who was a victim and who was a suspect. And a dead police officer would not be able to help anyone.” Evan Todd, a Columbine student who was wounded in the initial attack, escaped outside and then explained to a dozen policemen exactly what was happening inside: “They told me to calm down and take my frustrations elsewhere.”

Unfortunately, law enforcement learned little or nothing from the Columbine killings. At the Parkland high school in Florida in 2018, eight sheriff’s deputies lingered cowered outside while the shooting rampage by one ex-student continued, leaving 17 dead. A local cop who arrived during the shooting was urged not to enter the building: “Hey, be careful. The guy’s got a rifle,” a deputy told him. After the killings, the local sheriff’s department put out a deluge of false exculpatory claims that were shot to pieces by later revelations.

The killer, Nikolas Cruz, should have been arrested numerous times because of violence and threats at school and elsewhere. But school authorities avoided charging him, in part because of an Obama administration school-grant program that sought to curb the “school-to-prison” pipeline for minority students such as Cruz. Paul Sperry of RealClearInvestigations reported that the Parkland school was “in the vanguard of a strategy, adopted by more than 50 other major school districts nationwide, allowing thousands of troubled, often violent, students to commit crimes without legal consequence.” Thanks to such policies, as the Federalist noted, “Students charged with various misdemeanors, including assault, would now be disciplined through participation in ‘healing circles,’ obstacle courses and other ‘self-esteem building’ exercises.” But if schools expelled too many students, they would forfeit federal grants. 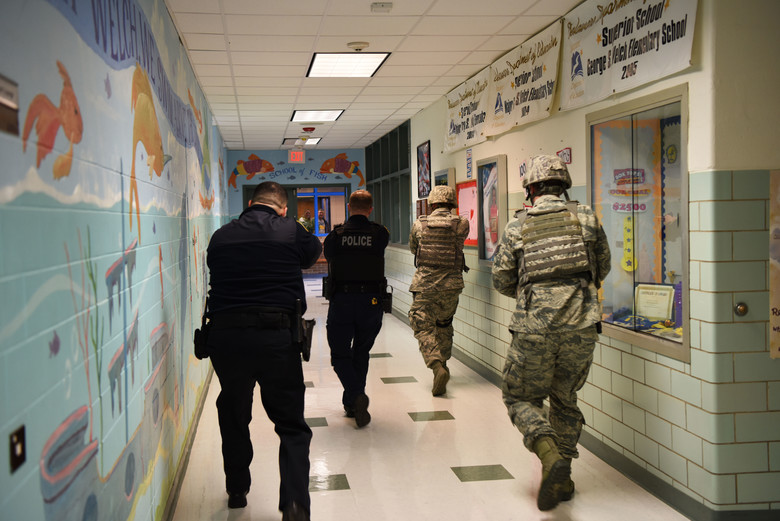 But the astounding failures of the schools and the police are irrelevant to activists determined to invoke the Parkland killings to forcibly disarm the American people. In August, March for Our Lives — an anti-gun group created after the Parkland shootings — issued “A Peace Plan for a Safer America.” Rather than focusing on the failures of officialdom, the activists called for forcibly reducing the number of firearms owned by Americans by a third — which could require government seizures of a hundred million guns. The group also proposed to put any would-be gun buyer through bureaucratic hell, including a “multi-step approval process, overseen by a law enforcement agency, that requires background checks, in-person interviews, personal references, rigorous gun safety training, and a waiting period of 10 days for each gun purchase.” Any permit to possess a firearm would have to be renewed annually — involving running another bureaucratic gauntlet. The group also called for the appointment of a federal anti-gun czar. The “National Director of Gun Violence Prevention” would also be responsible for propagandizing about the grave dangers of possessing a firearm in one’s home.

And then we would all be safe, right? March for Our Lives did not propose any solutions to the lack of police spines or the automatic coverups and lies that follow shooting debacles. New gun-control laws will do nothing to boost either the competence or courage of the police when every second counts. Unfortunately, there also appears to be no cure for the political exploitation of tragedies spurred or worsened by government debacles.

This article was originally published in the November 2019 edition of Future of Freedom.

Comey, the FBI, and FISA: The Debacle is Now Undeniable
Richard Jewell And The Illusion Of The FBI’s Power And Competence

5 Responses to Banning Guns Will Not Make Schools Safe