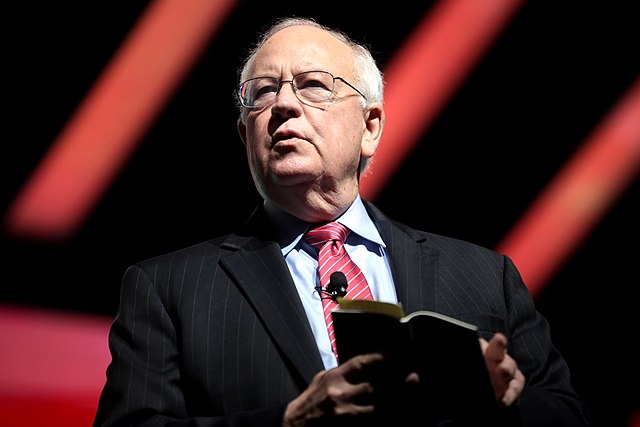 President Trump added former Special Counsel Ken Starr to his legal team for his Senate impeachment trial.  Starr is idolized by some conservatives but when he was Solicitor General for President George H.W. Bush, he championed some of the worst civil liberties abuses in modern times. Here’s my 1999 Playboy piece on his forgotten record.

HEADLINE: KEN STARR’S GREATEST HITS : we knew him when;

Independent prosecutor Ken Starr testified last November before Congress. He was calm and articulate in his attack on President Clinton. He dismissed critics who charged him with abusing the power of his office. He was not the point man for a puritan agenda. Above all, his actions expressed his “reverence for the laws.”

Those who are familiar with Starr’s career found the performance chillingly consistent.

As solicitor general during the Bush administration, Starr staged blatant attacks on the Bill of Rights. Long before Zippergate, he opposed putting limits on law enforcement.

According to Starr, there was no reason for the Supreme Court to overturn anything-not foolish laws enacted by Congress, not convictions achieved by deceptive prosecutors, not the tainted results of entrapment operations and not huge seizures of property based on minor offenses.

In 1989 a federal attorney launched a major effort to put the owner of 13 Minnesota erotica shops out of business. After a grand jury investigation and a four-month trial, a court convicted Ferris Alexander of selling four obscene magazines and three obscene videos-a minuscule proportion of the material sold at his wholesale and retail adult-entertainment outlets.

U.S. marshals seized thousands of books, magazines and videotapes from Alexander’s stores, as well as the stores themselves, real estate, bank accounts, two vans and a trailer. Alexander estimated the value of the seized assets at $25 million. The government burned his books and crushed his videotapes. The destruction of the three tons of materials overwhelmed a Minnesota garbage processing plant, resulting in a minor explosion when a box of nitrous poppers ignited. Most of the items destroyed by the feds had never been declared obscene.

In his presentation to the Supreme Court, Starr, with an eye for prurient sexual detail, stressed that one of the seized films had been She-Male Encounters (as if a guy with breasts were enough to justify the obscenity rap and resulting conflagration). Starr told the justices that all the material Alexander sold “partook of the same nature. They were adult entertainment materials.”

Justice David Souter challenged Starr’s logic: “I don’t see how we can assume the identity of eroticism with obscenity.” Justice John Paul Stevens agreed: “It’s puzzling why you burned it all.”

Starr: “The government’s concern, Justice Stevens, was that these materials were of . . . a similar nature.”

Would Starr confiscate all the jets owned by American Airlines if that company “showed three or four obscene movies in a flight from here to California”? Starr conceded that if it were “corporate policy” to show the films, then the government could lay claim to all the airline’s assets.

On August 27, 1985 police in Broward County, Florida searched a bus and arrested Terrance Bostick after they found cocaine in his travel bag. Bostick argued that the search was an invalid seizure. In late 1989 the Florida Supreme Court, in a four-to-three vote, denounced and banned the practice of mass bus searches, declaring: “Roving patrols, random sweeps and arbitrary searches would go far to eliminate [drug courier] crime in this state. Nazi Germany, Soviet Russia and Communist Cuba have demonstrated all too tellingly the effectiveness of such methods. Yet we are not a state that subscribes to the notion that ends justify means.”

The state of Florida appealed the decision to the U.S. Supreme Court, where Solicitor General Starr, representing the interests of the federal government and the police, protested. The defendant “was not confronted by the threatening presence of several officers speaking in commanding tones and blocking his exit or requiring him to move to an interview room. Instead, he was approached by two officers who spoke in conversational tones, who did not force him to move and who stood in a manner that did not block his access to the aisle.”

Oh, really? The government conceded in its argument that one of the officers partially blocked the aisle in front of Bostick, and the defense suggested that the aisle was only about 15 inches wide. The bus driver had left the bus and closed the door after the officers arrived, thereby making it appear that the bus was sealed off for the duration of the search.

What would have happened had the suspect said no when the officers asked to search his bags? Starr insisted in oral arguments, “This is a free society. You have the right to say no.” In his brief, Starr told the court, “It is clear that law enforcement officers may draw no inference justifying a search or seizure from a refusal to cooperate. That is, officers lacking legal justification to detain a person may not bootstrap noncompliance into justification for a detention, because in that event a citizen would in effect have no way of declining to participate in a ‘consensual’ encounter with the police.”

For a man who bootstrapped noncompliance into a writ of impeachment, his 1990 argument seems a touch disingenuous. As the ACLU noted, officers in several cases had “testified that a refusal to cooperate ‘might be suspicious’ and might cause police to notify authorities.” Charles Sullivan, a DEA spokesman in Louisiana, observed that if people are uncooperative, “you cast all your suspicions toward them.”

The Supreme Court ruled in Starr’s favor, decreeing that “the mere fact that Bostick did not feel free to leave the bus does not mean that the police seized him.”

In 1988 a federal grand jury charged John Williams Jr. of Oklahoma with providing false information on bank loan applications. In obtaining the indictment, the prosecution withheld exculpatory information from five boxes of Williams’ financial statements and depositions that might have proved he had no intent to defraud or mislead the banks. A federal district court and a federal appeals court threw out the indictment.

Fortunately, Ken Starr rode in to save the honor- or at least the prerogatives- of federal attorneys. Arguing the case before the Supreme Court in 1992, he insisted that while judges might review prosecutorial misconduct on a case-by-case basis, the judiciary should not “tell the prosecutor how to discharge his obligation.”

Starr fretted that if the courts could overturn indictments based on misleading information, the result would be “confusion-producing litigation. . . . The criminal justice system needs predictability and it needs certainty.” Apparently, it does not need truth.

Starr’s arguments won: The Court, by a five-to-four margin, proclaimed that a grand jury is “an accusatory body” obliged to “hear only the prosecutor’s side.”

Hungarian immigrant and Pennsylvania resident John Pozsgai was convicted of violating federal wetlands law after he put at least 32 truckloads of dirt and landfill on what one reporter described as a “ragged, weed-covered lot bordered by a four-lane state highway, a tire shop, a lumberyard and a junkyard filled with smashed cars.” But because the land was near a canal, the feds launched a high-profile prosecution of Pozsgai for violating the Clean Water Act, which prohibits anyone from polluting waterways used in interstate commerce. Although Pozsgai did no environmental harm, he received a three-year prison sentence and a $200,000 fine.

Starr did not initiate this prosecution, but he did intervene to keep Pozsgai in prison. A key piece of evidence offered at the trial were photos that purportedly showed that a stream on Pozsgai’s property ran into the Pennsylvania Canal-which prosecutors claimed had been used for interstate commerce. After the trial, Pozsgai’s lawyers discovered that those photographs showed no such thing. They appealed to the Supreme Court. Starr filed a brief that admitted that the pictures were inaccurate: “We have examined the photographs and determined that they do not show the stream flowing into the canal.” The canal, which had been designated as a historical landmark, was closed to interstate commerce, but never mind. The conviction should stand.

The Court, as usual, bowed to the solicitor general’s wishes. Damn the evidence. The prosecutor will define the terms. The Clean Water Act was a good law, even if the facts didn’t quite fit.

THE IMPOSSIBILITY OF ENTRAPMENT

In 1984 the Postal Inspection Service got the name of Keith Jacobson, a 56-year-old Nebraska farmer and veteran of the Korean and Vietnam wars, from a bookstore that had sold him two copies of Bare Boys magazine. Over the next two and a half years, five government-created entities sent Jacobson ten letters, including two solicitations to buy pictures. A prohibited-mail specialist at the Postal Inspection Service, masquerading as a pen pal, wrote a letter to the defendant describing his “male-male” interest. In his response, Jacobson indicated that he was opposed to pedophilia. One of the government-created companies, Far Eastern Trading Co., supposedly in Hong Kong, required Jacobson to affirm that he was “not an undercover law enforcement officer or agent of the U.S. government acting in an undercover capacity for the purpose of entrapping Far Eastern Trading.” Eventually, Jacobson placed an order for one magazine; the Postal Service delivered it, and shortly thereafter, the agents arrested Jacobson and searched his house for other evidence of his deviance. They found the material that the government had sent him and the copies of Bare Boys magazine.

One of the major issues in the Supreme Court’s review of the case was whether Jacobson was predisposed to order kid porn or whether he was the victim of overzealous investigation. Did the federal government have a reasonable basis to involve the Postal Service and Customs to ensnare a Nebraska farmer who had never been convicted or accused of any crime except for a drunk-driving conviction 30 years earlier? Starr, in his brief for the U.S. Court of Appeals for the Eighth Circuit, declared: “The government is not required to have a reasonable basis to believe a person is engaged in criminal activity before it may approach that person as part of an undercover investigation.”

Starr was especially worried that requiring reasonable suspicion would undermine government stings. Thus, for justice to triumph, government must have the right to entrap all citizens. For once, the Supreme Court rejected Starr’s argument and overturned Jacobson’s conviction.

James Bovard is the author of Freedom in Chains: The Rise of the State and the Demise of the Citizen (St. Martin’s Press).

4 Responses to Playboy: Ken Starr’s Greatest Hits Against the Constitution