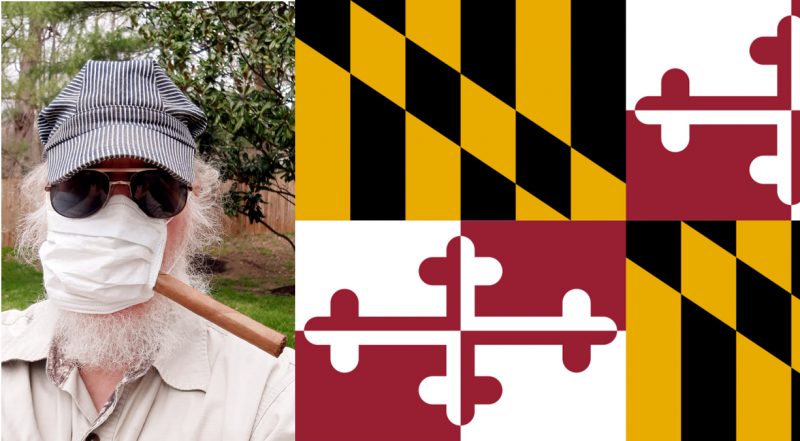 Maryland politicians have destroyed more than four hundred thousand jobs in dictatorial responses purporting to thwart the coronavirus pandemic. “Nearly one in five Maryland workers have filed for unemployment” compensation, theBaltimore Sun reported. The situation is so bad that even the Washington Post recognized that Maryland’s COVID “restrictions have crippled the economy and paralyzed daily life since mid-March.”

Shaky extrapolations of predicted infection rates sufficed to nullify limits on state and local government power. On March 20, Governor Larry Hogan, a Republican, ordered the shutdown of all “nonessential” businesses. Ten days later, Hogan issued a mandatory “stay-at-home” order for all Marylanders. At that time, roughly a thousand Marylanders had tested positive for COVID and eighteen had died from the virus.

Despite the shutdown, Maryland has had over forty-eight thousand COVID cases and more than twenty-two hundred fatalities. If the shutdown had been effective, the transmission rate should have plunged after the fourteen-day incubation period for coronavirus. Didn’t happen. The shutdown utterly failed to stop the pandemic but inflicted collateral damage that will hobble the state for many years and probably permanently blight thousands of lives.

For instance, on April 9, Montgomery County’s chief health officer Travis Gayles decreed that any grocery store customer who failed to wear a mask would be fined $500. Gayles discouraged local residents from acquiring and wearing the most reliable protection, such as surgical masks or N95 masks, which the county said “should be reserved for health care workers.” Hogan later followed up with a similar statewide mandate.

But some risks were too sacrosanct to reduce. Hundreds of grocery workers nationwide have been infected by the coronavirus and at least thirty have died. One of the biggest sources of contagion in grocery stores is ratty old recycling bags that customers drag along to tote their purchases home, which some states and cities have banned for the duration of the pandemic. Montgomery County imposes a five-cent tax on each plastic grocery bag, despite one food workers’ union calling for an “end to the disease-transmitting bag tax.” A majority of county council members sponsored a bill to suspend the grocery bag tax to “minimize risk,” because “the health and safety of all Montgomery County residents must come first.” The Sierra Club protested that suspending the bag tax will leave “the public with a false sense of security in encouraging single-use plastic shopping bags,” which “are difficult to clean.” But that’s why they are called “single-use” bags. The council quickly caved to the environmentalist demand but pretended to give a damn about grocery workers by encouraging residents to wash reusable bags after each visit to the grocery store—which is as likely as hell freezing over.

When Hogan announced that anyone who violated his “shelter-at-home” order could face a $5,000 fine and a year in prison, he ludicrously declared, “Every Marylander can be a hero, just by staying home.” As of early May, Maryland police had arrested more than a hundred people for violating the order and responded to more than three thousand reports of violations. It is unclear whether the percentage of Marylanders who turned into informants was higher than the rate in former East Germany.

Private parades are strictly prohibited during the lockdown. But Montgomery County police conducted at least three police car parades in front of local hospitals to show their support for healthcare workers. At the same time, the county police exploited the pandemic to justify refusing to provide any information on a brutal predawn, no-knock raid on March 12 in which Duncan Lemp, a 21-year-old libertarian-leaning gun rights activist was killed as he slept in his parents’ home in Potomac, Maryland. When Lemp family members signaled their intention to attend a planned protest over their son’s killing at the police headquarters, a county prosecutor speedily threatened any family members who attended the protest with a $5,000 fine and jail for violating Hogan’s shelter-in-place order.

Politicians talked as if any large gathering of people would be tantamount to mass murder. But there was a tacit exception for anything that trumpeted the majesty of the government.

A military jet flyover tribute to local hospitals in the Washington suburbs was Security Theater at its best. The Montgomery County Police Department announced on Twitter: “Please adhere to @GovLarryHogan social distancing order and do not congregate at any hospitals in the County to view the flyover as we must keep the hospital areas clear for healthcare workers.” Twitter user @LibertyLockPod replied, “The roar of the jets will give me strength while I cower indoors. Thank you government!” Another Twitter user groused, “Some hospitals in Montgomery County are out of hand sanitizer, supplying that would be a great way to honor them.”

When the US Navy Blue Angels did a heavily publicized flyover of Suburban Hospital in Bethesda on May 2, hundreds of people squeezed into the hospital parking lot and elsewhere to see the show, social distancing be damned. At least one county council member joined the crowd in blatant violation of the governor’s “shelter-in-place” order, while a second council member stood near the throng. But the media, except for the online Rockville Reports, ignored the high-profile hypocrisy.

Government officials justified the lockdown by endlessly claiming that their decisions were based on “science” and “data.” But the data is available only to those authorized to enter the Inner Temple of Maryland Politics, apparently. The online activist group Reopen Maryland complained that

Hogan has provided no transparency about the process through which models were consulted and used in Maryland’s decision-making to justify state and county closures. Reopen Maryland again calls upon the Governor to make his task force and recovery team minutes and records public. Taxpayers deserve to know how and why these destructive decisions were made.

The state government denied a request for such information under Maryland’s Public Information Act.

Maryland is busy hiring a thousand “contact tracers” to track down anyone who might have interacted with anyone who tested positive for COVID. Privacy will be no excuse for failing to disclose personal contacts. However, at the same time, the Maryland Department of Health ordered local county health departments to cease disclosing which nursing homes have been ravaged by COVID outbreaks, claiming that such information “‘serves no public health purpose’ and violates privacy laws,” as WJLA TV reported. Most COVID fatalities statewide have occurred in nursing homes. One would think that sons and daughters would have a legitimate interest in knowing where their parents faced the greatest risk of dying, but no such luck in the Free State.

Why the secrecy? Reopen Maryland requested and was denied “information on whether…the state forced nursing homes to accept COVID-19 positive patients discharged from hospitals, as suggested by the Governor’s April 5 executive order and corresponding directives from the Maryland Department of Health.” Similar policies in New York and Pennsylvania contributed to thousands of nursing home deaths.

As elsewhere in the United States, Democrats are far more enthusiastic about perpetuating the lockdown than are Republicans. On May 15, Governor Hogan rescinded the statewide stay-at-home order. That dictate never made any sense for much of the state. Garrett County, for instance, has had only ten COVID cases and no fatalities, but its schools and businesses were shuttered at the command of Annapolis.

Media-favored experts shuddered at Hogan’s premature release of 6 million people from de facto house arrest. Joshua Sharfstein, vice dean at the Johns Hopkins Bloomberg School of Public Health, lamented, “People wonder if it’s necessary, if it’s not necessary. When people receive mixed messages, they’re not going to do what they need to protect themselves.” Without Hogan’s dictate, every Marylander would presumably rush out into the street and hug everyone they saw. Actually, Marylanders responded to the pandemic by voluntarily “social distancing” even before Hogan’s stay-at-home order. Unacast, a company that created software to track social distancing via cell phone data, rated Maryland an “A” and one of the best in the nation.

Hogan’s announcement ending the state shutdown sparked a political pity party by Democratic officials in the Washington suburbs and Baltimore area. “All of us were taken aback by his announcement. We were hung out to dry,” whined Montgomery County executive Marc Elrich, who faced the burden of justifying perpetuating the lockdown for the million residents in his county. Elrich lamented that that “makes it sound like it’s an arbitrary decision.…[Hogan] kind of ignited this rebellion against what we were doing.”

The Washington Post summarized Elrich’s response: “Montgomery County rushed to create its own data dashboard last week, so elected leaders could justify to constituents why they remain stuck in a coronavirus shutdown.” But county officials are apparently being slippery, relying on arbitrary selection and manipulation of data to justify perpetuating arbitrary power. Maryland daily COVID fatalities have fallen by more than 50 percent, and the hysteria is becoming harder to perpetuate every week. Anne Arundel County struck bureaucratic gold when it declared that its pandemic emergency would continue until “health equity” was achieved—whatever the hell that means.

Most Maryland residents live in the Baltimore-Washington corridor, and most of the media coverage in that area has been both pro-panic and progovernment. As a result, Maryland politicians may face few consequences for the destruction and pointless subjugation they imposed. But the Great Pandemic Follies of 2020 may prove a fertile breeding ground for anarchists, libertarians, and unregenerate cynics across the nation.