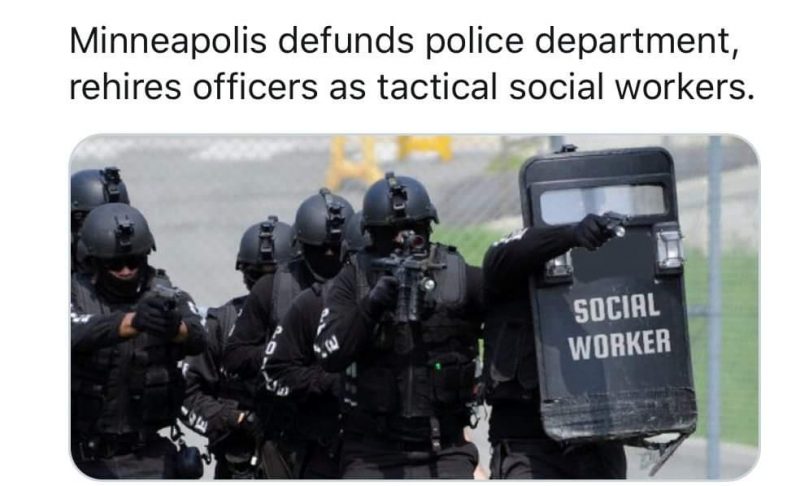 Thanks to Peter Quinones for this meme

“Defund the Police” is the latest rallying cry for protestors in many cities across the nation. Many activists, enraged by the brutal killing of George Floyd by Minneapolis police, are calling for completely disbanding the police, while others are seeking reductions in police budgets and more government spending elsewhere. However, few activists appear to be calling for a fundamental decrease in the political power that is the root cause of police abuses.

Many “Defund the Police” activists favor ending the war on drugs. That would be a huge leap forward toward making police less intrusive and oppressive. But even if police were no longer making a million plus drug arrests each year, they would still be making more than 9 million other arrests. Few protestors appear to favor the sweeping repeals that could take tens of millions of Americans out of the legal crosshairs.

How many of the “Defund the Police” protestors would support repealing mandatory seatbelt laws as a step toward reducing police power? In 2001, the Supreme Court ruled that police can justifiably arrest anyone believed to have “committed even a very minor criminal offense.” That case involved Gail Atwater, a Texas mother who was driving slowly near her home but, because her children were not wearing seatbelts, was taken away by an abusive cop whose shouting left her children “terrified and hysterical.” A majority of Supreme Court justices recognized that “Atwater’s claim to live free of pointless indignity and confinement clearly outweighs anything the City can raise against it specific to her case”—but upheld the arrest anyhow. Justice Sandra Day O’Connor warned that “such unbounded discretion carries with it grave potential for abuse.”

Unfortunately, there are endless pretexts for people to be arrested nowadays, because federal, state, and local politicians and officials have criminalized daily life with hundreds of thousands of edicts. As Gerard Arenberg, executive director of the National Association of Chiefs of Police, told me in the 1996, “We have so damn many laws, you can’t drive the streets without breaking the law. I could write you a hundred tickets depending on what you said to me when I stopped you.”

Would feminist zealots calling to “Defund the Police” be willing to tolerate the legalization of sex work? That would mean they could no longer howl about vast “human trafficking” conspiracies exploiting young girls every time an undercover cop is illicitly groped by a 58-year-old Chinese woman in a massage parlor.

Some Black Lives Matters activists are calling for a ban on “stop and frisk” warrantless searches for drugs, guns, or other prohibited items. But some “Defund the Police” activists also favor government prohibitions of private firearms. It is as if they were seeking to formally enact the old slogan: “When guns are outlawed, only outlaws will have guns.”

Much of the media coverage is whooping up the recent wave of protests, perhaps hoping to stir public rage to support sweeping new government edicts. According to Washington Post assistant editor Robert Gebelhoff, “It would be a mistake to try to resolve the problems with police behavior without also acknowledging and addressing America’s epidemic of gun violence. Police reform and gun reform go hand in hand. Reducing the easy availability of guns would not eliminate the problems with policing in America nor end unwarranted killings, but it would help.”

After heavily armed government agents forcibly confiscate a couple hundred million privately owned guns, the police won’t worry about any resistance and can behave like perfect gentlemen. Repealing most gun laws would produce a vast increase in self-reliance, especially in urban areas where police dismally fail to protect residents. But few street protestors are making that demand.

Many “Defund the Police” advocates presume that poverty is the cause of crime and that that shifting tax dollars from police budgets to social programs and handouts will automatically reduce violence. The Great Society programs launched by President Lyndon Johnson vastly increased handouts on a similar assumption. Instead, violent crime skyrocketed, especially in inner cities where dependence on government aid was highest. “The increase in arrests for violent crimes among blacks during the 1965–70 period was seven times that of whites,” as Charles Murray noted in his 1984 book Losing Ground.

Many advocates of defunding the police believe that a universal basic income, along with free housing and other services, would practically end urban strife. The history of Section 8 housing subsidies provides a stunning rebuke to such naïve assumptions. Concentrations of Section 8 recipients routinely spur crime waves that ravage both the peace and property values of their neighbors. A 2009 study published in the Homicide Studies academic journal found that in Louisville, Memphis, and other cities violent crime skyrocketed in neighborhoods where Section 8 recipients resettled after leaving public housing.

“Defund the Police” demands are already being translated by politicians into a justification for additional spending for social services or the usual sops. In Montgomery County, Maryland, police chiefs issued a statement announcing that they were “outraged” over George Floyd’s killing and then pledged to “improve training in cultural competency for our officers.” Elsewhere, politicians and police chiefs are talking about relying more on mental health workers to handle volatile situations. Radio host Austin Petersen predicted that the George Floyd protest “reforms” would result in “more social programs meant to give jobs to liberal white women.” Author and filmmaker Peter Quinones deftly captured the likely reality with a meme where Minneapolis police were renamed the Tactical Social Workers and still looking hungry to kick ass.

Politicians are claiming to have seen the light thanks to the Floyd protests. Floyd was killed, because politicians at many state and local levels have dismally failed to constrain the lethal power of police. There was nothing to stop politicians from banning the vast majority of no-knock raids, or torpedoing the perverse “qualified immunity” doctrine concocted by the Supreme Court, or repealing the even more perverse “Law Enforcement Officers’ Bill of Rights” that can convey a license to kill. One of the most powerful members of the House of Representatives, Eliot Engel (D-NY), embodied the political reality when he was caught on a hot mike: “If I didn’t have a primary, I wouldn’t care” about denouncing the George Floyd killing. It is unclear how much longer other politicians will pretend to give a damn.

Police have too much power, because politicians have too much power. There is little chance that the George Floyd protests and riots will reverse the criminalization of daily life. How many “Defund the Police” activists are also calling for a radical rollback of politicians’ prerogatives to punish almost any activity they disapprove? There will be some reforms and plenty of promises, but as long as cops have pretexts to harass and assail millions of peaceful Americans every day, the outrages will not end. Until protestors realize that the problem is Leviathan, not the local police chief, oppression will continue.

4 Responses to “Defund the Police”? Start by Repealing the Laws