Why We Question the Election Results

Doubt over the election is widely dismissed as crankery, but skepticism of the media elite narrative is hardly unwarranted. 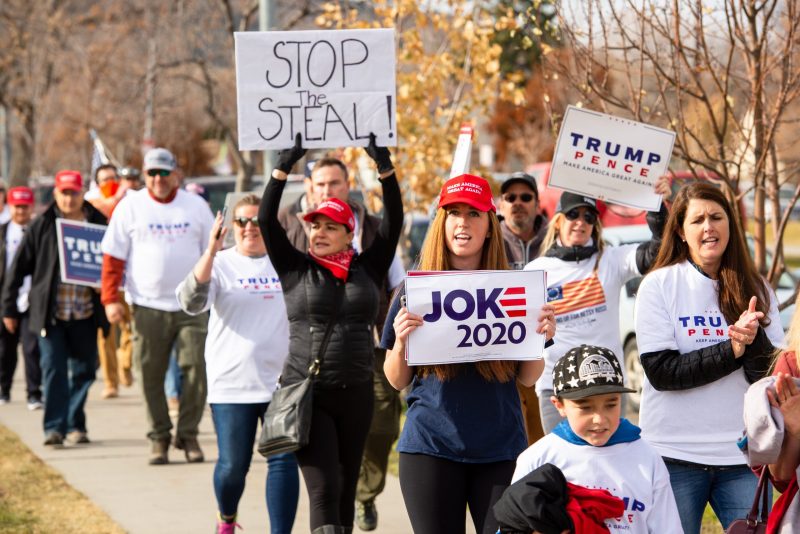 Americans’ trust in government and the media has collapsed. Two months before the presidential election, only 20 percent of Americans trusted the federal government to “do the right thing” most of the time, according to a Pew Research Center survey. It is unlikely that trust in the government will rebound any time soon, in part because of how the 2020 election was conducted and because the news media has obliterated much of the tattered remnants of its credibility since 2016. Instead, the question is: how much lower can Americans’ trust fall in the political system without a total collapse of legitimacy?

It is unclear at this time how much fraud occurred in swing states and whether it was sufficient to change the outcome of the Electoral College. Some of the early charges by Trump supporters and lawyers regarding electoral foul play have belly-flopped spectacularly. The apparent endorsement by Gen. Michael Flynn for Trump to declare martial law is both reckless and reprehensible. But there are plenty of legitimate unanswered questions about the election results.

A Monmouth poll last month found that 77 percent of Trump backers believed that Biden won due to fraud. A Morning Consult poll last month showed that the percentage of Republican voters who said they had “at least some trust in the U.S. election system” plunged from 66 percent before the election to 37 percent afterwards. Like the bogus Russian collusion narrative that Democratic activists created after the 2016 election, that distrust will haunt the Biden administration.

The 2020 election in many states was practically designed to maximize tainted ballots. In 2012, a New York Times analysis concluded that “fraud in voting by mail is… vastly more prevalent than the in-person voting fraud that has attracted far more attention.” Notorious mail-in voting fraud stretches back more than 150 years, when there was widespread intimidation and finagling in the Union Army to tilt soldiers’ votes in favor of Abraham Lincoln’s reelection. But the overwhelming majority of media commentary prior to the latest election insisted that only paranoid people would fear mail-in fraud. Thanks to 65 million mail-in ballots this year, more fraud may have occurred in this election than in any since 1876.

At the same time that many states made it easier (if not automatic) to vote by mail, some states dropped verification requirements—including matching signatures, return addresses, or having a witness verify the person and the vote. Lawyer J. Christian Adams noted that “Democrats succeeded in tossing out state laws related to absentee ballot verification, deadlines and a whole range of laws all in the name of COVID. By and large, GOP efforts in court failed. It was a courtroom bloodbath that created vulnerabilities across the system.”

There was no reason to abolish many of the existing safeguards for absentee voting, but the Democratic activists did so regardless. On top of this, widespread “ballot harvesting” occurred—political activists and others rounding up ballots to take to a drop-box or other venue for delivery. This was legal in some states, not in others, but it made a mockery of any “chain of custody” for a ballot. Regardless of the potential conniving, any piece of paper with a splotch next to Biden’s name was treated as if it were as sacrosanct as an American showing up at his polling place, showing his identification (still required in some states), and casting his ballot in a booth.

The 2020 election result is also partly the result of gross negligence of both political parties at federal, state, and local levels. After the 2000 Florida election debacle with punch-card machines, Congress responded by throwing money at states and municipalities to purchase electronic voting machines.

But the apparent high-tech fix opened up a new realm of potential corruption that sparked fierce controversy over the 2004 election results, especially in Ohio. In 2005, Rep. Maxine Waters (D-CA) complained that many states used more sophisticated technology for lottery tickets than for elections: “Incredibly even in those few jurisdictions that have moved to electronic voting… we do not require a verifiable paper trail to protect against vote tampering.” Unfortunately, many states continued to rely on electronic systems that bizarrely included a prohibition of auditing the results.

The media has lambasted President Trump’s allegations that Dominion, the company that provided electronic voting systems in several key states, rigged the outcome against him. But similar condemnations were made just last year by Democrats and left-leaning media. Sen. Ron Wyden (D-OR) declared that the voting machine lobby “literally thinks they are just above the law, they are accountable to nobody, [and] they have been able to hotwire the political system in certain parts of the country… The maintenance of our constitutional rights should not depend on the sketchy ethics of these well-connected corporations that stonewall Congress, lie to public officials and have repeatedly gouged taxpayers.” The Guardian, a left-leaning British newspaper, published an investigation last year that concluded that “democracy in the United States is now largely a secretive and privately-run affair conducted out of the public eye with little oversight. The corporations that run every aspect of American elections, from voter registration to casting and counting votes by machine, are subject to limited state and federal regulation.” The Guardian warned that the companies that provide election services “have long histories of errors that affected elections, of obstructing politicians and the public from seeking information, of corruption, suspect foreign influence, false statements of security and business dishonesty.”

Regardless of the voting software disputes, there are enough anomalies about the 2020 election results to choke a horse. Though Biden appeared to evoke little enthusiasm among voters, he scored far more votes than did Barack Obama in his “Come to Jesus” 2008 salvation campaign. The late-night surges of Biden votes in key swing states raised suspicions of foul play. Even The Washington Postadmitted that Biden had the “least coattails” of any presidential candidate in 60 years as a Republican red wave swept contested House races and many state legislative contests. Many of the ballots that pushed Biden over the top cast a vote solely for a presidential candidate at a rate vastly higher than the “sole votes” for Trump on such ballots.

Unfortunately, Americans cannot count on the media to honestly investigate the controversies of the 2020 election. A week after Election Day, The New York Times ran a banner headline across the top of the front page: “Election Officials Nationwide Find No Fraud.” How did the Times know? Their reporters basically called election officials in each state and asked, “Did y’all have any fraud?” Since government officials said “no,” that confirmed 2020’s “Vox Populi, Vox Dei”—Biden’s win was the voice of God. That Times headline signaled that the media had zero interest in ferreting through allegations about electoral misconduct.

At this point, it is surprising that anyone who is not employed by a newspaper or television network still trusts the media. From the time that Trump won the 2016 election, much of the media has zealously campaigned to undermine almost every move he made. During the 2020 campaign, the media mostly buried stories about Biden’s direct meddling in a Ukraine fraud investigation or the damning revelations from Hunter Biden’s laptop. Some of the same people who spent years telling us that Trump was the Great Satan are now telling us that democracy is our “civic religion,” so we have to bow to Biden.

When Biden was deemed to have won the 2020 election, Washington Post columnist Margaret Sullivan celebrated with an article whose headline boasted that the media had “saved democracy.” Another Washington Post headline scoffed that anyone who doubted Biden’s victory was an “Election Denier”—placing them in the same odious category as Holocaust deniers. An ABC News analysis portrayed distrust of the election results as a form of mental illness.

Will the controversies surrounding the 2020 election be expunged from the Internet like the tawdry reputation of a convicted con artist? On December 9, YouTube announced that it would “disallow content alleging widespread fraud or errors changed the outcome of a historical U.S. Presidential election…. We will remove videos claiming that a Presidential candidate won the election due to widespread software glitches or counting errors.” So will YouTube delete all videos dealing with the controversies around the 1824 and 1876 elections? If YouTube is going to effectively ban criticism of presidential elections, will it soon extend the same suppression to congressional, mayoral, and dogcatcher elections? How many other Internet giants will help Biden achieve “consecration via censorship”?

Regardless of efforts by the media and Democratic politicians to delegitimize all doubts on Biden’s victory, the 2020 election, like the 2000 election, may be decided by lawyers and political appointees (justices), not directly by voters. If investigations into alleged fraud or vote rigging expose overwhelming evidence of major abuses after Biden is inaugurated, that will be another cluster bomb dropped onto federal credibility.

At best, the 2020 election was “close enough for government work” democracy. The same folks who are now hollering that Biden represents the “will of the people” helped “define down” voting to a mockery of prior American standards. It would be helpful if a national election conferred more legitimacy on a new president than the legend of the Lady of the Lake tossing the Excalibur sword to King Arthur. How many more election debacles does Washington believe the American people will tolerate?

5 Responses to Why We Question the Election Results