UPDATED:  Here’s my riff on Waco and Biden from my Saturday speech to the Maryland Libertarian Party convention.  Great audience, great banter – a joy to talk to folks who understand the depravity of what the feds did at Waco.  Click here to listen or download 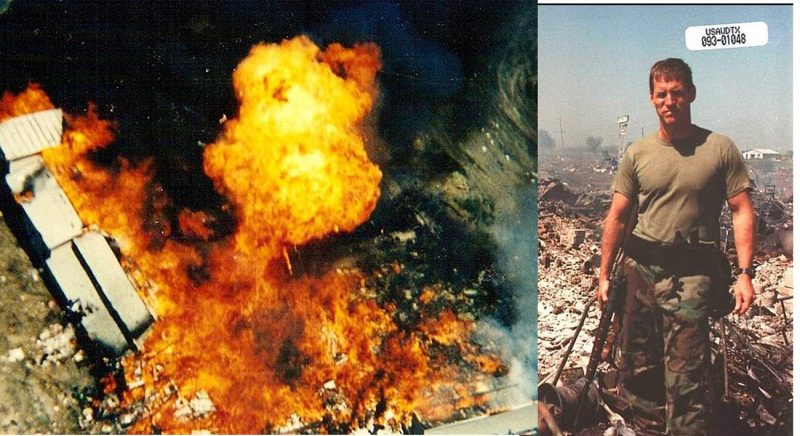 The president’s ATF nominee reminds us of a dark episode of law enforcement lawlessness.

Last week, President Joe Biden nominated David Chipman to be head of the Bureau of Alcohol, Tobacco, Firearms, and Explosives, the premier federal firearms enforcement agency. Biden complemented that announcement with a call for a national red flag law to entitle police to preemptively confiscate firearms from citizens suspected of being a threat to themselves or others. 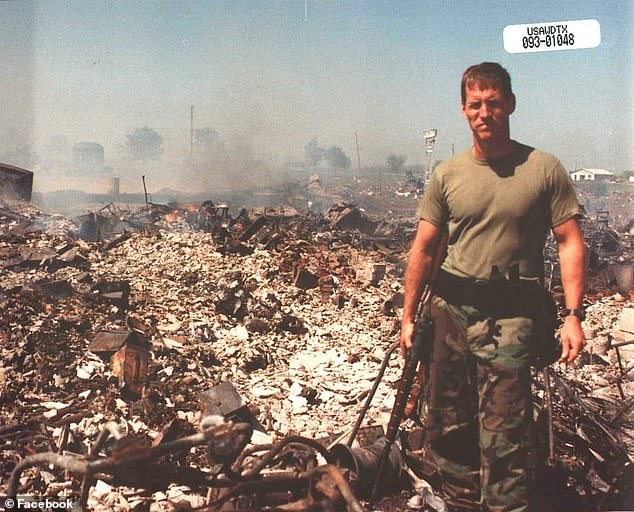 Chipman was a 25-year ATF agent and a key official at the 1994 federal trial of the Branch Davidians who survived the ATF and FBI assaults the prior year. Many federal agents posed for grisly “victory photos” in the rubble of the Branch Davidians’ Waco, Texas, home after it burned to the ground during an FBI assault. One photo allegedly shows Chipman proudly holding a rifle in front of the wreckage where scores of children died shortly before. The White House and Chipman’s current employer, the antigun Giffords organization, did not respond to repeated email requests to confirm or deny that Chipman is the federal agent in that photo; the Daily Mail and many online sites have tagged Chipman as the agent. In a Reddit public question and answer session in 2019, Chipman sought to spur support for an assault weapons ban by falsely claiming that the Davidians shot down two federal helicopters that were attacking their compound.

Biden’s nomination of Chipman has thrust Waco back in the national spotlight. Millions of Americans permanently lost faith in the federal government after ATF and FBI attacks concluded with more than 80 civilians dead. But few Americans are aware of Biden’s role, first in helping cover up the debacle and later, after ample damning evidence had surfaced, exonerating federal law enforcement and instead blaming Americans who distrusted Washington. Biden’s behavior on Waco is a bad portent for anyone who expects federal agencies to be leashed during his reign.

At the time of the federal assault at Waco, Biden was chairman of the Senate Judiciary Committee, which had primary oversight jurisdiction over the conduct of federal law enforcement agencies. How did Biden react to an FBI tank and toxic gas assault that ended with shocking carnage? On the day after the fire, Biden “cautioned that lawmakers should wait until all the details become available before it begins second-guessing the Justice Department,” the New York Times reported. Biden declared, “We’ve got to wait to figure out what happened before we have hearings.” Delaying hearings until after the federal agencies that had blundered (or far worse) announced the “facts of the matter” would have horrified earlier generations of congressional leaders who courageously exposed federal lies and cover-ups, from Sen. William Fulbright’s investigation of the Vietnam War in the 1960s to Sen. Frank Church’s investigation of FBI and CIA rampages in the 1970s.

Biden conducted zero hearings on Waco while he was chairman of the Senate Judiciary Committee. After Republicans captured control of Congress in the 1994 elections, committee chairman Orrin Hatch (R-UT) held hearings in late 1995. Despite plenty of damning disclosures of federal misconduct at Waco in the prior two years, Biden was emphatic that the real problem was “a growing number of people across the country who are seizing on the incidents at Waco as well as at Ruby Ridge to suggest that law enforcement is our enemy.”

“The record from Waco does not evidence…any improper motive or intent on the part of law enforcement,” Biden declared. Instead, Biden touted “the excellent overall record of the Federal law enforcement agencies, including both the ATF and the FBI.” Biden vindicated the feds: “The ATF had a legitimate and very important reason to be at Waco in the first place, that is, to serve warrants on those reasonably suspected of violating the Federal criminal laws.” But if the ATF Waco search is Biden’s idea of “legitimate,” the next four years will be hell on civil liberties.

The Waco investigation got rolling in July 1992, when ATF agent Davy Aguilera visited the Branch Davidians’ gun dealer, and suggested the Davidians were illegally converting semiautomatic firearms to full automatic firing capacity, a federal felony. When Davidian leader David Koresh was told about that allegation, he invited Aguilera to visit the Davidians’ residence and conduct an on-the-spot inspection. Aguilera refused the invitation and his subsequent affidavit application to search the Davidians’ residence “contained an incredible number of false statements,” according to a 1996 congressional report.

In an October 1995 Senate hearing, Biden declared, “Nobody in Washington, nobody in ATF, nobody involved with ATF had an idea that, you know, those Branch Davidians are dangerous people, Koresh is a dangerous guy, we have got to be aggressive and go after them.” The ATF’s subsequent conduct reveals Biden’s definition of “non-aggressive.” Instead of conducting a peaceful search of the Davidians’ sprawling wooden home, the ATF chose to launch a massive attack on its peaceful residents. On February 28, 1993, more than 70 ATF agents and three military helicopters launched a Sunday morning attack with no warning. Prior to the assault, the ATF alerted several television stations to assure coverage of a raid expected to seize a big cache of weapons. CBS’s 60 Minutes disclosed that ATF agents said “the initial attack on that cult in Waco was a publicity stunt—the main goal of which was to improve ATF’s tarnished image.” A 1996 congressional investigation noted that ATF deliberately chose a “dynamic entry approach. The bias toward the use of force may in large part be explained by a culture within ATF,” including “promotional criteria.”

ATF claimed a surprise attack was necessary because Koresh almost never came out of his home. Six years after the attack, thanks to FOIA hounding by former federal lawyer David Hardy, the ATF finally disclosed a memo revealing that, nine days before the raid, two undercover ATF agents (recognized as such by Koresh) knocked on the door of the Davidian residence and invited Koresh to go shooting. Koresh, two other Davidians, and the two agents had a fine time shooting AR-15s and SIG Sauer semiautomatic pistols. Koresh provided the ammo and the agents handed him their guns. The ATF undercover agents’ official report, filed before the raid, noted: “Mr. Koresh stated that he believed that every person had the right to own firearms and protect their homes.” Koresh could have easily been arrested that day but that would have preempted the biggest and most glorious raid in ATF history.

Instead, the raid quickly turned into a debacle, leaving four ATF agents and six Davidians dead. The ATF claimed Davidians “ambushed” their agents, a story promoted by the vast majority of the media. But after ATF agents told superiors that the ATF shot first, the ATF ceased its shooting review to avoid creating documents that could subvert the court case against the Davidians. A Treasury Department report written by outside experts and issued in September 1993 condemned “deliberately misleading post-raid statements about the raid and the raid plan by certain ATF supervisors.” After the raid debacle, the FBI took over the scene and ramped up the pressure on the Davidians. The FBI settled on an assault plan that included using military tanks to collapse the building atop the residents. The FBI fired pyrotechnic rounds at the scene, perhaps the source of the conflagration that ended the standoff.

Biden was one of the most fervent champions of the federal drug war in the 1980s and 1990s, but he had no complaint about the ATF’s drug war scam at Waco. Prior to the raid, ATF officials were told that it would be illegal for the U.S. military to assist them unless there was a “drug nexus” to the case. Voila! A few days later, the ATF notified military officials that they suspected the Davidians had a methamphetamine lab in their basement. ATF agents then received training in close-quarters combat and called in military helicopters from the Texas National Guard to assault the Davidians’ home in conjunction with the agents attacking on the ground. Despite such extensive preparations, the drug charge vanished immediately after the raid, and federal prosecutors never raised the issue at the surviving Davidians’ 1994 trial. A 1996 congressional report concluded that the ATF’s actions during and after the raid made it “clear that the ATF believed that a methamphetamine lab did not exist.” The House report concluded that “the ATF intentionally misled Defense Department and military personnel” regarding the existence of the meth lab. But federal agencies treated those lies as a harmless error since they did not reduce government power.

At the trial of the surviving Davidians in 1994, federal prosecutors compared Koresh to Hitler and Stalin and declared that the 11 defendants were “as much religious terrorists as the people who blew up…Pan Am 103.” But the jury found all the Davidian defendants not guilty of murder, though seven were convicted of manslaughter. The New York Timescharacterized the verdict as a “stunning defeat” for the federal government; a Los Angeles Times headline declared, “Outcome Indicates Jurors Placed Most Blame on the Government.” Jury foreman Sarah Bain commented after the trial, “The federal government was absolutely out of control there…. The wrong people were on trial, it should have been the ones that planned the raid and orchestrated it.”

But neither the jury verdicts nor House hearings in the summer of 1995 that exposed further ATF and FBI deceits and abuses dented Joe Biden’s view. Instead, at the Senate hearings in October of that year, Biden portrayed the real danger as people on the “left and right who see everything as some great conspiracy.” Biden sought “to establish that [Waco] wasn’t Big Brother sitting up in Washington.” If the ATF mass assault and the FBI tank-and-toxic-gas attack don’t count as Big Brother, what does?

Biden is making restoring trust in government a theme of his presidency. In his inaugural address, he declared, “Each of us has a duty and a responsibility as citizens, as Americans, and especially as leaders…to defend the truth and defeat the lies.” Biden’s conduct on Waco and his nomination of David Chipman signal that Americans can’t count on any help from the White House in defeating the lies.