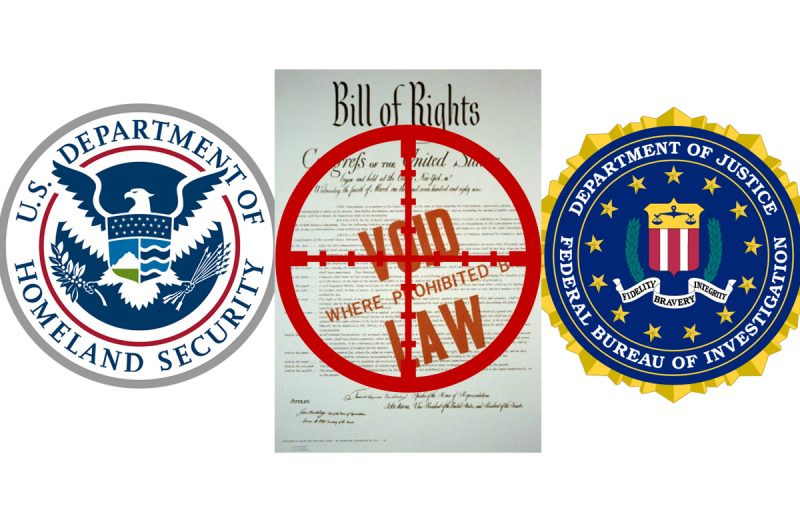 The Biden administration may soon recruit an army of private snoops to conduct surveillance that would be illegal if done by federal agents. As part of its war on extremism, the Department of Homeland Security (DHS) may exploit a “legal work-around” to spy on and potentially entrap Americans who are “perpetuating the ‘narratives’ of concern,” CNN reported last week. But federal informant programs routinely degenerate into “dollars for collars” schemes that reward scoundrels for fabricating crimes that destroy the lives of innocent Americans. The DHS plan would “allow the department to circumvent [constitutional and legal] limits” on surveillance of private citizens and groups. Federal agencies are prohibited from targeting individuals solely for First Amendment-protected speech and activities. But federal hirelings would be under no such restraint. Private informants could create false identities that would be problematic if done by federal agents.

DHS will be ramping up a war against an enemy which the feds have never clearly or competently defined. According to a March report by Biden’s office of the Director of National Intelligence, “domestic violent extremists” include individuals who “take overt steps to violently resist or facilitate the overthrow of the U.S. government in support of their belief that the U.S. government is purposely exceeding its Constitutional authority.” Perhaps like setting up a private informant scheme to evade constitutional restrictions on warrantless surveillance?

One DHS official bewailed to CNN: “Domestic violent extremists are really adaptive and innovative. We see them not only moving to encrypted platforms, but obviously couching their language so they don’t trigger any kind of red flag on any platforms.” DHS officials have apparently decided that certain groups of people are guilty regardless of what they say (“couching their language”). The targets are likely to be simply people with a bad attitude towards Washington. That will include gun owners who distrust politicians who vow to seize guns.

The latest fuzzball standards (“narratives of concern”?) fit the post-9/11 pattern of wildly expansive threat definitions. Shortly after its creation in 2002, DHS warned local law enforcement agencies to keep an eye on anyone who “expressed dislike of attitudes and decisions of the U.S. government” as potential terrorists. DHS-funded Fusion Centers have attached the  “extremist” tag to gun-rights activists, anti-immigration zealots, and individuals and groups “rejecting federal authority in favor of state or local authority”—even though many of the Founding Fathers shared the same creed. The Pentagon taught soldiers and bureaucrats that people who attend public protests are guilty of  “low-level terrorism.” An Air Force report accused women who wear hijabs of “passive terrorism.” Endless enemies lists come in handy at congressional appropriations hearings.

Federal officials insist that those who have nothing to hide have nothing to fear. FBI chief Christopher Wray perennially proclaims that the FBI never investigates Americans based solely on their ideas. But, as the Intercept reported in 2019, “Who the Justice Department decides to prosecute as a domestic terrorist has little to do with the harm they’ve inflicted or the threat they pose to human life.” But that claim is belied by the FBI’s beloved “informant loophole.” As Trevor Aaronson explained, “FBI agents must obtain supervisory approval to enter a group or gathering using an undercover agent, and to obtain that approval, the FBI must have a ‘predicate,’ or a factual basis to suspect criminal activity. But neither supervisory approval nor a predicate is required if the work is done by an informant, creating a loophole that allows the FBI to investigate Americans for virtually any reason.”

Any new informants hired by the Biden administration will operate under the same perverse incentives that have long subverted due process. Informants tend to be rewarded based on how much assets they help government seize or how many people they help prosecutors condemn. As a 2019 report by the American Bar Association noted, “The government pays cash for incriminating information and testimony. This is troubling because the financial incentive to make cases against others may be much greater than the personal integrity of the informants.” A report by the Justice Department Office of Inspector General slammed the Drug Enforcement Agency for failing to “document the reliability of informants” who helped the DEA to confiscate billions of dollars of private property. The DEA paid informants $237 million between 2010 and 2015, including $25 million shoveled out to only nine informants. DEA’s best paid informant, Andrew Chambers, Jr., was found to have given “false testimony under oath in at least 16 criminal prosecutions nationwide before he was exposed in the late 1990s,” USA Today reported in 2013. Attorney General Janet Reno banned the DEA from using him as an informant but in 2008, DEA re-hired Chambers and used him for at least the following five years.

Informants have become far more perilous to freedom and decency since the 1970s thanks to the Supreme Court effectively defining entrapment out of existence. Almost anything an informant or undercover government agent does to induce someone to violate the law is considered fair play. Craig Monteilh, an informant who was sent into mosques in southern California, was given permission by his FBI handlers to sleep with Muslim women he targeted and to secretly tape record their pillow talk. Other FBI informants browbeat their targets into discussing bombing government buildings, providing sufficient verbal rope to hang them. The vast majority of people charged with international terrorism offenses in the decade after 9/11 were not bona fide threats but were induced by the FBI or informants to behave in ways that prompted their arrest, according to Trevor Aaronson’s The Terror Factory: Inside the FBI’s Manufactured War on Terrorism.

One purpose of relying on private informants is to assure that there are no federal fingerprints when people are coaxed or shoved into breaking the law. The FBI admits that it formally entitles its army of informants to commit more than 5,000 crimes a year; there is no estimate of how many crimes are committed directly by FBI agents, who have been formally taught that “the FBI has the ability to bend or suspend the law to impinge on the freedom of others.” Thanks to the FBI’s Iron Curtain of Secrecy, we have no idea what sort of atrocities its informants may now be committing. During George W. Bush’s reign, the White House formally invoked executive privilege to block disclosure of the FBI’s sweetheart deals for Whitey Bulger, a notorious FBI informant and Irish crime boss linked to 20 murders. The FBI knew of Bulger’s role in killings but lied in court to protect him, even providing false testimony to send innocent men to prison for life to safeguard Bulger. That debacle was summarized in a 2004 congressional report titled, “Everything Secret Degenerates: The FBI’s Use of Murderers as Informants.” In 2011, a federal judge aptly labeled the FBI’s behavior in the case as “uncontrolled official wickedness.”

In 2016, Omar Mateen carried out the biggest terrorist attack since 9/11, killing 49 people at the Orlando Pulse Nightclub attack. Prior to his attack, Mateen boasted of his connections to terrorists and threatened to have Al Qaeda kill a co-worker’s family; his mosque warned authorities that he was a threat to public safety. But the FBI swayed the local sheriff’s department to drop its investigation of Mateen because a “confidential informant” assured FBI agents that Mateen was not a terrorist and would not “go postal or anything like that.” The federal case against the killer’s widow collapsed in 2018 after jurors belatedly learned that the killer’s father, an Afghan immigrant, had been an FBI informant since 2005 and may have used his influence to assure that his son was not arrested prior to his killing spree.

The FBI has long relied on informants to choreograph political violence. In the 1960s, FBI informants “set up a Klan organization intended to attract membership away from the United Klans of America,” according to a 1976 Senate report. One FBI informant with the Klan, along with other Klansmen, had “beaten people severely, had boarded buses and kicked [Freedom Riders] off” and beat restaurant customers “with blackjacks, chains, pistols.” In 2006, a paid FBI informant organized and led a neo-Nazi march in a black neighborhood in Orlando, Florida. In 2017, an FBI informant masterminded a Klan rally in Charlottesville, Virginia, sharply increasing the tension and fear prior to the much larger and notorious Charlottesville Unite the Right rally the following month. There have not yet been any disclosures regarding what role, if any, that federal informants played in the January 6 clash at the Capitol.

DHS wants to enlist more private informants at the same time federal undercover operations are already out of control. At least 40 federal agencies are now conducting undercover operations involving thousands of agents. An undercover DEA agent “created a fake Facebook page from the photos of a young woman in Watertown, N.Y. — without her knowledge — to lure drug suspects,” the New York Times reported.  IRS agents are officially permitted to “pose as an attorney, physician, clergyman or member of the news media.” The Times noted in 2014 that  “the military and its investigative agencies have almost as many undercover agents working inside the United States as does the F.B.I.,” often serving on joint federal task forces of the type that will likely be expanded for the Biden extremist crackdown. A sting operation by the Alcohol Tobacco and Firearms agency swayed mentally handicapped individuals to get tattooed to help advertise its bogus gun store, violating federal laws protecting the disabled. Oversight is often a mirage: an ATF committee created to oversee undercover operations didn’t bother meeting for more than half a decade. The Times noted that “even Justice Department officials say they are uncertain how many agents work undercover.”

The Biden administration is considering unleashing a new surveillance program at a time when Americans have no idea how many federal agencies are already spying on them. Yahoo News disclosed last month that the Postal Inspection Service is running iCOP —the Internet Covert Operations Program—to sweep social media and other websites searching for any “inflammatory” postings on topics including protests against COVID lockdowns. Postal inspectors got access to private messages on Parler and Telegram, presumably with no search warrant. The iCOP program turns over its discoveries to other federal agencies. Rachel Levinson-Waldman of the Brennan Center for Justice commented that iCop “seems a little bizarre” since the surveillance included “monitoring of social media that’s unrelated to use of the postal system.” Rep. Thomas Massie (R-KY) denounced the program for violating the Constitution and asked: “The USPS has been losing money for many years… so where do they find money to run this surveillance program?” Unfortunately, federal agencies that trample the law and the Constitution in their surveillance efforts are usually punished with budget increases.

Perhaps setting up a new informant scheme to work around the Constitution is not the best response to extremists who fear government is lawless. Unfortunately, Americans are unlikely to hear about crimes committed by Biden’s new snoops until long after the damage is done, if ever.

Thanks to Pixabay for the crosshairs vector.  Thanks to the FBI & DHS for those logos. 🙂