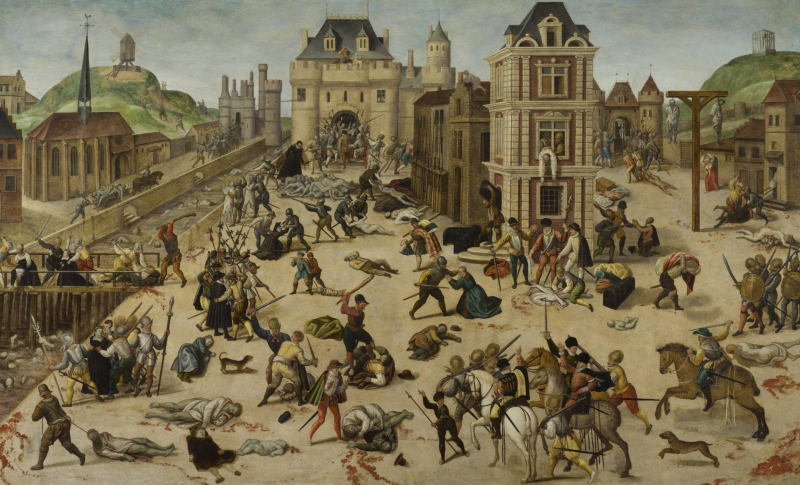 On this day in 1572, French Catholics slaughtered 30,000 Protestants in the streets of Paris. The French King and the Pope helped organize the carnage of the biggest religious massacre in Europe in the 1500s.  Roughly half the Bovards living in Paris were killed in the bloodbath. Three surviving Bovards fled past drunken guards at Paris’s city gates, raced to the coast, hijacked a rowboat, and made it across the English Channel and took refuge in London.  Or at least that’s the Bovard family lore I’ve read. (I know not to bet the rent money on that lore’s accuracy.)

Some years ago at a D.C. reception, I met a cultural attache from the French embassy. She saw my name tag and asked about my last name.

“Yes, it’s French. My ancestors were Huguenots,” I said.

“Oh – they were victims,” she replied remorsefully.

“Hell no! Getting kicked out of France was the best thing that ever happened to the Bovard family,” I replied with a big grin.

She just stared at me kind of wild-eyed. I fear I may have ruined her stereotypes of Huguenots.

After fleeing France, my ancestors resettled in northern Ireland. My ancestors were reportedly linen and lace manufacturers in France but became flax growers after resettling in County Donegal.  I come by rusticity honestly.

Actually, they left at the start of the great potato famine, but the Fact Checking Police haven’t caught up with me yet.

My kinfolk settled in western Pennsylvania.  My great-great-grandfather dodged Abraham Lincoln’s military conscription, a step that I appreciate both philosophically and genetically.

Here’s an article on how the French refugees eventually got along with and intermarried with the Irish.

The 1572 carnage at least had some positive philosophical results. Philippe de Mornay barely avoided being killed in the massacre but seven years later, his pamphlet Vindiciae contra tyrannos (A Defense Of Liberty Against Tyrants) was published in Switzerland.  This pamphlet laid the groundwork for subsequent authors (including British philosopher John Locke) to clearly establish the right to resist oppressive rulers. (It is available as a free download at this web page).  The book contained far more solid thinking on the nature of political institutions than one will encounter in political science classes where progressive professors exalt the power of benevolent rulers, the Constitution be damned. de Mornay observed, “There is nothing which exempts the king from obedience which he owes to the law, which he ought to acknowledge as his lady and mistress.” Invoking Aristotle, he stressed, “Civilized people reduced kings to a lawful condition, by binding them to keep and observe the laws. Unruly absolute authority remained only amongst those who commanded over barbarous nations.” The vision of “government under the law” was one of the greatest lodestar of early modern political philosophy. de Mornay also derided “the minions of the court.”  We have made great progress since his time – now we have think tank minions.

French philosopher Michel de Montaigne was horrified by the carnage in Paris as well as in Bordeaux, where he served periodically as mayor.  Montaigne tossed out some ideas that he hoped would deter religious genocide: “It is putting a very high price on one’s conjectures to have a man roasted alive because of them.” He admitted that he could not say all that he believed: “I speak truth, not so much as I would, but as much as I dare; and I dare a little the more as I grow older.” But he never forthrightly condemned the St. Bartholomew Day’s Massacre. He gave a few winks to skepticism: “Man is certainly stark mad; he cannot make a worm, and yet he will be making gods by dozens.” He also recognized how adulation spawned some of the most dangerous illusions: “The strange luster that surrounds a king conceals and shrouds him from us.”

Almost two centuries later, Voltaire was spurred by the legal murder of a Huguenot in his time to zealously champion toleration. “Toleration has never been the cause of civil war; while, on the contrary, persecution has covered the earth with blood and carnage,” he wrote. In his Philosophical Dictionary, he declared, “What is tolerance? It is a necessary consequence of humanity. We are all fallible, let us then pardon each other’s follies. This is the first principle of natural right.”

The St. Bartholomew’s Day Massacre shows the perils of combining fanaticism with power. Unfortunately, this is a lesson which modern societies may need to learn again.  A recent poll showed that more than half of Americans expect a civil war “in the next few years.” Hopefully that poll is as inaccurate as most of the polls preceding recent presidential elections.  Historian Henry Adams observed a century ago that politics “has always been the systematic organization of hatreds.” Nowadays, politics seems hellbent on multiplying hatred. And few things spur hatred more effectively than tarring all political opponents as traitors. But that is increasingly the coin of the realm in political disputes. (And folks had such high hopes for the civilizing impact of Twitter…..)

Here are some outtakes from French publications on the anniversary: 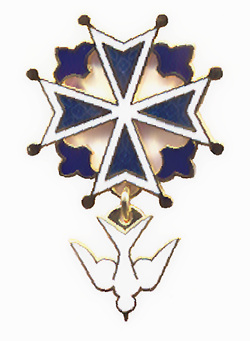 In this Huguenot Cross, the bird looks like it is in a nosedive.