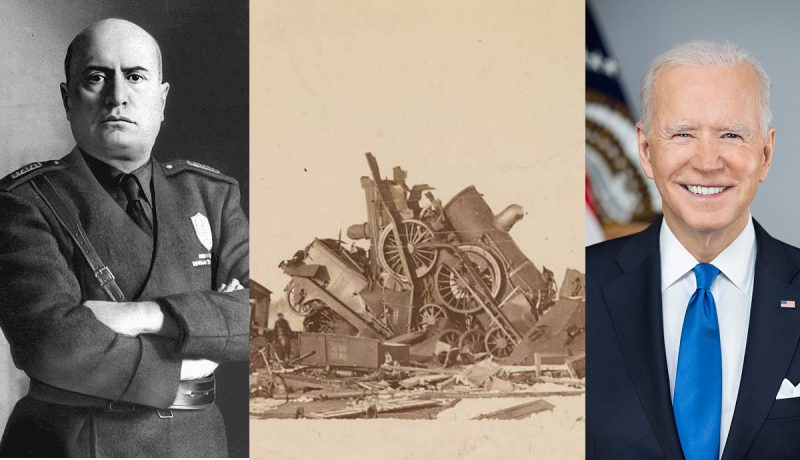 Will Joe Biden Make the Trains Run on Time?

Biden is currently hammering Congress to enact legislation to effectively outlaw a strike next week by 100,000 railroad freight workers. Unions are threatening a work stoppage to compel railroad owners to provide more sick leave. Biden said yesterday, “I share workers’ concern about the inability to take leave to recover from illness or care for a sick family member. No one should have to choose between their job and their health—or the health of their children.”

But nothing matters more than the health of Biden’s approval ratings—which could be walloped by a strike that could quickly throw 765,000 Americans out of work, according to White House estimates. “Communities could lose access to chemicals necessary to ensure clean drinking water. Farms and ranches across the country could be unable to feed their livestock,” he warned. A rail strike could be almost as disruptive as the COVID shutdowns that Biden championed.

Biden declared in April, “Workers who join a union gain power—the power over decisions that affect their lives.”  But not as much power as the president has over them.

Joe Biden just became America’s #1 “Election Denier.” Railroad workers voted not to accept the agreement reached by negotiators in September. “I am reluctant to override the ratification procedures and the views of those who voted against the agreement,” the president said yesterday. But not reluctant enough to refrain from squashing the “Will of the Railroad Workers” (who are not as sacrosanct as the voters who supposedly coronated Biden’s power with “Will of the People”).

No wonder Twitter is exploding with profane denunciations of Biden as a union buster. Liberal activists are stunned at Biden’s apparent betrayal of rank-and-file workers. But being pro-union—like almost every other position—is simply a “flag of convenience” for Biden. Yet the White House flip flop is surprising considering Biden’s prior craven support for unions.

When Congress dished out $52 billion in subsidies for new semiconductor factories, Biden boasted last month in Syracuse that all the construction labor would be union jobs—even though the high-wage scales would help make the factory uncompetitive on world markets. (The Empire Center noted “roughly two-thirds of Central New York construction workers will be excluded” from those jobs because they aren’t union members.)

In an April speech to the Building Trades Union, Biden hailed a push for unionization by Staten Island warehouse workers employed by Amazon: “By the way, Amazon here we come. Watch! Watch!”

In May, Biden held a White House photo op including leaders of the Starbucks Workers United, which is pushing to unionize the 400,000 baristas and other staff at the 15,000 Starbucks locales in the United States. Starbucks chief flack A.J. Jones complained after that meeting: “American workers have the absolute right to decide for themselves to unionize, or not to unionize, without any undue influences.” Like by the White House?

Biden’s biggest and most disastrous pro-union intervention was his kowtowing to teacher unions to perpetuate school shutdowns during the COVID pandemic. Biden policymakers let teacher unions rewrite the Centers for Disease Control guidance that justified keeping schools closed. Teacher unions effectively barricaded school doors the same way that segregationist governors in the 1950s and 1960s refused to obey federal court orders to admit black students. But as long as Team Biden can shirk blame for the devastating learning losses resulting from school shutdowns, his administration will continue to support teacher union demands.

The specter of a disruptive rail strike should spur an examination of federal laws that vest vast economic veto power in unions. Federal statutes are based on a blind faith in the benefits of forcing people into herds—on a presumption of the total incompetence or inability of the individual worker to achieve justice for himself. Federal law seeks to end the imbalance in power between corporations and employees by subjugating workers to union bosses. Supreme Court Justice Wiley Rutledge, in a 1944 dissent, observed that federal labor law gave unions “a thraldom over the men who designate them” by “creating rights in the unions overriding those of the employees they represent.”

The issue of unions’ right to try to forcibly shut down businesses during a strike turns on a question of property rights—whether a worker somehow automatically has an inalienable right to his existing job, at a salary that he demands. Does the fact that a businessman hired a worker automatically give that worker a perpetual right to employment on terms that the worker demands? A man has a right to walk off his job (unless the worker has voluntarily signed a no-strike contract) if he is not satisfied. But the right to walk off a job does not include the right to fracture the skull of someone else who walks into the job.

Railroad unions are notorious for using their power to extort payment for make-work jobs—know as “featherbedding.” Unions fought forever to preserve jobs for firemen on trains—a relic of steam locomotives that were almost irrelevant after diesel engines. Unions also perpetuated plenty of contract clauses that failed to pass the laugh test. Until 1987, Burlington Northern railroad crews received hazardous-duty pay bonuses for working trains traveling through Montana because, according to the union contract, Montana was still classified as Indian territory. Railroads have also been shafted by a long series of idiotic management decisions.

Unfortunately, Biden is hellbent on making federal labor law far more oppressive. He is championing the Protecting the Right to Organize Act (PRO Act), legislation that would bolster unions by destroying the jobs of independent contractors across the nation. Any freedom that impedes the collection of union dues apparently deserves to be outlawed. As long as the unions deliver the votes and the money to politicians, they will be entitled to subjugate dissident workers and struggling businesses as they please.

Biden ritually gushes about his love of unions to prove his love of working-class Americans. But Biden’s railroad intervention is a reminder of the folly of expecting the president to give a damn about anything except his own approval ratings.

3 Responses to Will Biden Make the Trains Run on Time?