Claire Wolfe is one of the finest freedom writers around. She has a knack for making freedom both vivid and fun. She has a new novel entitled Hardyville Tales – When ‘Don’t Tread on Me’ meets ‘For Your Own Good.’

The book is based in part on the hugely-popular series of internet columns Claire has written about Hardyville for more than a decade. It is hard not to love a town whose best known attraction is a Statute of a Drunken Cowboy.

Claire continually forces readers to reflect on their own lifestyle choices. “Do you choose convenience over independence?” she asks. As one of her favorite Hardyville residents comments, “Not many want to be rugged individualists, or even slightly inconvenienced individualists.

Claire does a great job of sketching characters and conflicts, especially as outsiders move in and try to inflict one government regulation or salvation scheme after another. Claire walks readers through one federal grant program after another. She is not one of those “Free Silver Republicans” (David Stockman’s great phrase) who believes that government can pass out one goody after another without wrecking society.

One of the best chapters in the book covers “The Law in Hardyville.” Here are a few excerpts from the short statute book:

* Anyone advocating the notion that all people have “rights” to housing, welfare, food, a job, medical care or anything else that has to be provided by hardworking people will be expected to provide any or all of the above, on demand, personally, to anyone making the claim for it.

*Anyone who advocates asset forfeiture without due process is expected to place an identifying sticker on his or her vehicle so that the Hardyville police will know who they can stop next time they’re short on donut money. Our friendly officers will cheerfully supply you with an absolutely free new “I love forfeiture!” sticker for your next vehicle as they tow away your present one.

*Supporters of affirmative action are expected personally to surrender their jobs to any member of any government-approved minority who expresses an interest in the position, no matter the qualifications of the person making the demand.

*Those advocating bans on any non-coercive recreation practiced by others (e.g. drugs, sex, gambling) will be expected to give up one of their own pleasures for each item or activity of which they wish to deprive other people. 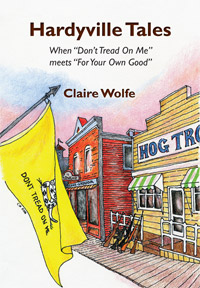 Following is an excerpt from the book’s introduction:

Hardyville was also — from 1997 to 2007, on and off — located on the Internet, first on a news site and then on the website of Backwoods Home magazine.

Given the town’s absolute lack of conventional appeal, you might ask, “Why the heck would anybody want to be there?” There are reasons — about 1776 of them.

Hardyville managed to scrape its way into the twenty-first century almost entirely without politicians, bureaucrats, or any of their Evil Spawn. It is, in other words, what America once had a chance to become — and didn’t.

So what happens when the immovable objects of freedom and sheer, bloody stubbornness are slammed by the (so we are taught to believe) irresistible forces of faux-democracy, bureaucracy, and a whole army of other -ocracies and -isms?

You can buy the book directly from Claire (only $12, including postage) by clicking here.

(If you’re not familiar with Claire’s work, one of the best places to start is her recent column, “Occupy Your Ownself“ – one of the most thoughtful responses to the protests in New York. Her column ignited a brawl on her blog that was as exciting as a “Shock and Awe” bombardment.