This 1965 New Yorker cartoon – from the dawn of the era of Vietnam War protests – captures the danger of leaving peace to the experts. 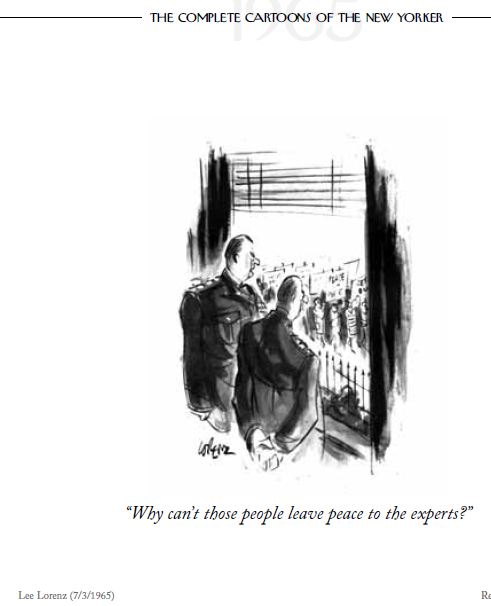 Daniel Ellsberg was inspired by some of those anti-war protests. I did a piece for the Future of Freedom Foundation in 2008 on Ellsberg’s memoir:

ELLSBERG’S LESSONS FOR OUR TIME

Daniel Ellsberg is the kind of American who should receive a Medal of Freedom. Except that the Medals of Freedom are distributed by presidents who routinely give them to “useful idiots” and apologists for their wars and power grabs. It should be renamed the Medal for Enabling or Applauding Official Crimes in the Name of Freedom.

Ellsberg knowingly risked spending a life in prison to bring the truth about the Vietnam War to Americans. He had hoped truth would set Americans free from the spell of official lies. But the experience in Iraq indicates that Americans have learned little if anything from the Vietnam-era deceits.

Flora Lewis, a New York Times columnist, writing three weeks before 9/11, commented in a review of a book on U.S. government lies on the Vietnam War, “There will probably never be a return to the discretion, really collusion, with which the media used to treat presidents, and it is just as well.” But within months of her comment, the media had proven itself as craven as ever.

The following year, Ellsberg’s book — Secrets: A Memoir of Vietnam and the Pentagon Papers — came out. I should have read this book before writing the “Lying and Legitimacy” chapter in Attention Deficit Democracy. Ellsberg’s bitter experiences would have curbed my youthful idealism. His book hit the streets at a time when Americans were still inclined to see Bush through a 9/11 holy haze. His lies on Iraq were not widely recognized until after Baghdad had fallen and the WMDs failed to materialize.

Ellsberg tells the story of how, as a former Marine lieutenant with a doctorate from Harvard, he was hired by John McNaughton, the assistant secretary of defense, and started work in August 1964 on the day the Gulf of Tonkin crisis ignited. He relates receiving the “flash” wire dispatches from the USS Maddox.

Within hours after the U.S. destroyer reported being attacked by North Vietnamese PT boats, the ship’s commander had wired Washington that the reports of an attack on his ship may have been wildly exaggerated: “Entire action leaves many doubts.”

But it didn’t matter, because this was just the pretext that Lyndon Johnson was looking for. Johnson and Defense Secretary Robert McNamara raced to proclaim that the attack was unprovoked. But at a National Security Council meeting on the evening that the first report came in, Johnson asked, “Do they want war by attacking our ships in the middle of the Gulf of Tonkin?” CIA chief John McCone answered, “No. The North Vietnamese are reacting defensively to our attack on their off-shore islands. They are responding out of pride and on the basis of defense considerations.”

The fact was that the United States had orchestrated an attack by South Vietnamese commandos on North Vietnamese territory before the alleged conflict began. But Johnson lied and commenced bombing, and Congress rushed to cheer him on.

In Vietnam, as in Iraq, the U.S. government pushed hard to get an election to sanctify its puppet regime. Ellsberg, who spent two years in Vietnam after his time in the Pentagon, aided some of the key U.S. officials in this effort who sought an honest vote. But when U.S. Ambassador Henry Cabot Lodge heard their pitch, he replied, “You’ve got a gentleman in the White House right now [Johnson] who has spent most of his life rigging elections. I’ve spent most of my life rigging elections. I spent nine whole months rigging a Republican convention to choose Ike as a candidate rather than Bob Taft.” Lodge later ordered, “Get it across to the press that they shouldn’t apply higher standards here in Vietnam than they do in the U.S.”

But Lodge’s comments were downright uplifting compared with a meeting that Ellsberg attended with former Vice President Richard Nixon, who was visiting Vietnam on a “fact-finding mission” to help bolster his presidential aspirations. Former CIA operative Edward Lansdale told Nixon that he and his colleagues wanted to help “make this the most honest election that’s ever been held in Vietnam.” Nixon replied, “Oh, sure, honest, yes, honest, that’s right … so long as you win!” With the last words he did three things in quick succession: winked, drove his elbow hard into Lansdale’s arm, and slapped his own knee.

It’s hard to imagine any U.S. government official even suggesting to Bush, in his fly-bys at Camp Cupcake in Iraq, that the United States should make sure that the Iraqi elections were fair and square.

Ellsberg’s memoirs vividly explain how top officials are corrupted by possession of what they consider to be top-secret information. Ellsberg warned Henry Kissinger shortly after Nixon’s 1968 election victory that having access to classified information is “something like the potion Circe gave to the wanderers and shipwrecked men who happened on her island, which turned them into swine.”

This is the one message of the book that no longer seems relevant, since there haven’t been any swine in the White House or Pentagon for a long time.

In 1967, the Pentagon ordered top experts to analyze where the war had gone wrong. The resulting study contained 47 volumes of material exposing the intellectual and political follies that had, by that time, already left tens of thousands of Americans dead. After the study was finished, it was distributed to the key players and federal agencies. However, the massive study was completely ignored. At the time the New York Times began publishing excerpts in 1971, “the White House and the State Department were unable even to locate the 47 volumes.” New York Times editor Tom Wicker commented at the time that “the people who read these documents in the Times were the first to study them.”

Ellsberg helped write a portion of the papers dealing with the Kennedy administration. He was struck by the incorrigibility of U.S. policy. No matter how many Ivy League grads and whiz kids were at the helm, “There was a general failure to study history or to analyze or even to record operational experience, especially mistakes. Above all, effective pressures for optimistically false reporting at every level, for describing “progress” rather than problems or failure, concealed the very need for change in approach or for learning.”

The same failures permeate the U.S. military’s experience in Iraq. The Pentagon and White House have concocted one bogus standard after another to sanctify whatever recent policy change they announced.

Ellsberg was a gung-ho liberal Cold Warrior until the late 1960s. As he read the confidential documents that formed the basis of the Pentagon Papers, he realized that he had greatly underestimated the amount of perennial presidential deceit in America. He grasped that

the concentration of power within the executive branch since World War II had focused nearly all responsibility for policy “failure” upon one man, the president. At the same time, it gave him enormous capability to avert or postpone or conceal such personal failure by means of force or fraud. Confronted by resolute external resistance, as in Vietnam, that power could not fail to corrupt the human who held it.

Ellsberg became active with anti-war demonstrators and has great anecdotes of idiot cops at D.C. protests. The motto of the 1971 May Day anti-war protests was “If they won’t stop the war, we’ll stop the government.” This is an ideal that should not be forgotten by those in our time who have wearied of surge and postsurge nonsense.

I was surprised to learn how hard Ellsberg had to struggle to find anyone with the gumption to go public with the 7,000 pages. Sen. George McGovern at first was interested but ducked out on putting the Papers in the Congressional Record, as did Sen. William Fulbright. On the other hand, Sen. Mike Gravel of Alaska had no fear and pulled out all the stops to get the information out.

The New York Times’s publication of the Pentagon Papers was the big breakthrough. Nixon’s Justice Department raced to get an injunction blocking publication, and later did the same when the Washington Post began publishing material Ellsberg sent it. Ellsberg responded by sending chunks of his report to newspapers around the country. The Nixon administration’s rage and machinations were the best PR the Pentagon Papers could have received.

Nixon henchman H.R. Haldeman said to Nixon on the day the Papers first hit the New York Times that the result would be that “the ordinary guy” comes to believe that “you can’t trust the government; you can’t believe what they say; and you can’t rely on their judgement. And the implicit infallibility of presidents, which has been an accepted thing in America, is badly hurt by this.”

Unfortunately, Haldeman’s fear was not borne out. Ellsberg was disappointed at the response to the Pentagon Papers: “There remained enormous resistance in the minds of voters and commentators to believing that these generalizations applied to an incumbent president.” This has been a perennial pitfall for American democracy: assuming that the most recently elected politician is an entirely different species from all the rascals who preceded him. It was especially ironic that so many Americans were so slow to recognize Nixon’s treachery.

At the start of his trial for leaking the Pentagon Papers, Ellsberg declared, “This has been for me an act of hope and of trust. Hope that the truth will free us of this war. Trust that informed Americans will direct their public servants to stop lying and to stop the killing and dying by Americans in Indochina.”

This was the type of idealism that spurred Henry Kissinger to label Ellsberg “the most dangerous man in America.”

In the new century, Ellsberg has continued speaking out, condemning official lies, and appealing to Americans to recognize that wars are far bloodier and more costly than leaders claim. In July 2006, he warned that if the United States attacks Iran, “I have no doubt that there will be, the day after or within days an equivalent of a Reichstag fire decree that will involve massive detentions in this country.” He has publicly urged other Pentagon and administration insiders to take the risk to leak key documents in order to serve truth instead of the current regime.

Unfortunately, even when government officials risk their freedom and careers to leak information, the media sometimes refuse to publish it — or they bury it until after an election — as the New York Times did with its information on Bush’s illegal warrantless wiretapping of Americans’ phone calls.

Who knows how many other leaks have never seen the light of day because of a media that kowtowed to President Bush and Vice President Cheney as if they were gods?

2 Responses to Folly of Leaving “Peace” to the Pentagon Experts