Maryland governor O’Malley was so busy laying plans to harass and disarm the state’s peaceful gun owners that he did not notice that a violent criminal gang had taken over a state prison in Baltimore. I look forward to seeing plenty of references to this when he O’Malley launches his presidential campaign.   At least we know how prison guards try to cure their self-esteem problems. 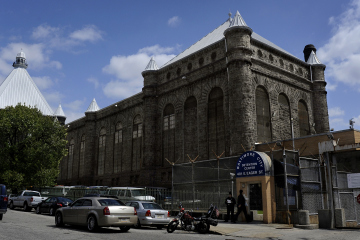 The female guards apparently circulated their price list for various sexual favors to the convicts. I would wager heavily that those women failed to report their ‘personal services’ income on their tax returns.

From the New York Daily News:

Tavon White of the Black Guerrilla Family allegedly ‘took control’ of the Baltimore City Detention Center, which is now under investigation.

A gang leader awaiting trial for attempted murder has fathered five children with four of his female prison guards, it has emerged.

Tavon White, boss of the Black Guerrilla Family, allegedly “took control” of the Baltimore City Detention Center, in Maryland – which is now under investigation by federal prosecutors.

It was all part of a plot, it is alleged, to target certain guards who had “low self-esteem and insecurities” so the gang could run the prison on its own terms.

Seven inmates, 13 female correctional officers and five others with gang ties have been charged with plotting to smuggle drugs, cellphones and other contraband into the facility.

“The inmates literally took over “the asylum,” and the detention center became a safe haven for BGF,” FBI Special Agent in Charge Stephen Vogt alleged.