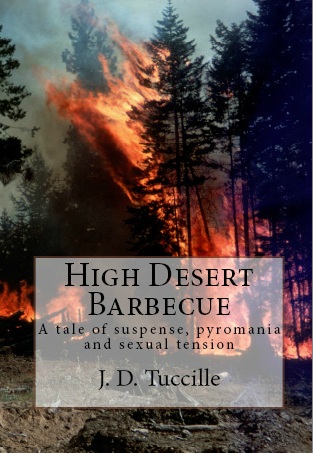 J.D. Tuccille‘s High Desert Barbecue is a zesty subversive romp through the woods and deserts of northern Arizona. How could anyone not like a feral mountain man in a running battle with the Forest Service? After inept Forest Service rangers ignite a huge fire when burning down the mountain man’s squatter shack, the feds demonize their victim as the arsonist. Their target flees to Falstaff, where he catches up with an unemployed editor and his girlfriend. They proceed to unravel a conspiracy by rangers and environmental extremists to set a vast conflagration as part of “an idealistic lark… to drive human habitation from the high desert pine forest in the name of all that was good and green.”

But the mountain man and his two comrades unhinge the “Carthage Option.” A sporadic gun battle in the highlands of northern Arizona keeps readers engrossed. Tuccille has the right level of detail on firearms. When the mountain man unearths a vintage British World War Two Enfield rifle, his friend asks: “Does the museum curator know his exhibit is missing?” But the Enfield does yeoman service in rebuffing the feds and eco-terrorists.

The book abounds in great descriptions, such as the environmental extremist Dr. Greenfield, the leader of the Center for Floral Supremacy, who had “a lined, bearded face haloed by a spray of graying hair” and “looked like a biblical prophet who’d been tracked, sedated, and stuffed into an off-the-rack Sears sport coat.”

It is hard not to like a book that warns readers in the preface to not “use this novel as a hiking guide.” One can easily understand why the author resettled in that part of the world. Ridge lines stocked with Ponderosa Pines sound far more pleasant than either the Capital Beltway or the New York subway. The novel sparkles with a spirit of resistance to oppressive authority that is rarely encountered on the East Coast.

You can buy High Desert Barbecue on Amazon here, or in other formats here.