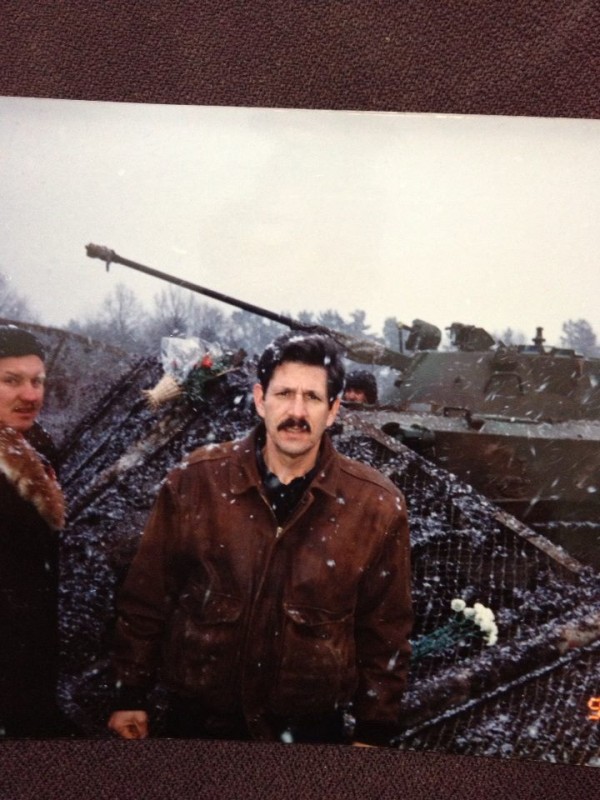 This is a photo of Ludwig von Mises’ historian Richard Ebeling  “near the TV Tower in Vilnius, Lithuania, January 13-14, 1991, (Soviet tank and crew member in background) after the Soviet military seized government buildings and communication centers in an attempt to crush the Lithuanian freedom movement. Thirteen people killed that night resisting Soviet power,” Richard noted. Richard was in Vilnius giving a series of lectures on the value of freedom. Richard has just posted a vivid recollection of that night on his Facebook page  – and probably soon to be reposted elsewhere around the Internet.

A few years after the Soviet Union collapsed, Ebeling traveled to Moscow and discovered a vast trove of Mises’ personal papers that had been secreted away by the Soviet regime.

Richard, currently a professor at Northwood University and the president of the Foundation for Economic Education from 2003-2008, has an excellent synopsis of his writing on Mises’ life and work here.  Some of Richard’s Liberty Fund collections of Mises’ papers are available here and here

I wrote an op-ed denouncing the Soviet crackdown in Lithuania a few days after it happened. Here’s the piece (which, if memory serves, horrified some of my Beltway libertarian acquaintances):

HEADLINE: Cut off favors to the Soviet regime

Once again, the Red Army has proven that tanks and paratroopers can rout unarmed civilians. Once again, the West is bank-rolling a Soviet leader’s efforts to enslave the people of the Soviet Union.

Mikhail Gorbachev has denounced the Lithuanian government as a ”bourgeois dictatorship” and justified sending in troops to ”prevent bloodshed.” As usual, the Soviet media are blaming the violence on the unarmed men, women and children who got in the path of Soviet bullets. Gorbachev is clearly intent on crushing the democratically elected governments in the Baltics.

What does the Bush administration, the scourge of the Persian Gulf, do? President Bush admits he is ”disturbed,” Secretary of State James Baker confesses he is ”concerned,” and the administration is reportedly considering ”temporarily suspending technical exchanges.” There are no plans to stop forcing U.S. taxpayers to provide $ 1 billion to feed the Red Army via grain
export subsidies or to stop other pending credit subsidies.

Yet, it is obvious that Gorbachev is using U.S. food aid to force Soviet republics to sign a treaty to surrender their independence and submit to Moscow. As Sen. Bob Dole said, ”Gorbachev has offered the people of these republics two options: sign or starve.”

The USA should cease all economic aid and all economic credits to the Soviet regime. All sales of military-related technology should be prohibited. All arms control negotiations should be suspended – especially since the Soviets already admit to violating the Conventional Forces in Europe treaty signed in November.

We should send and accept ambassadors to the Baltic republics. We should offer duty-free entry into the USA for all goods produced in and exported from the Baltics. This would provide a great stimulus to their economic development and independence and would counteract the economic blockade imposed on these states by Moscow.

The CIA did an excellent job in bank-rolling and aiding the Solidarity union in Poland during the dark days of the early to mid-’80s. The CIA should provide massive covert aid to democratic groups in break-away Soviet republics.

Just because there are no oil fields in the Baltics does not mean that the USA should continue feeding the tank crews that crush Baltic citizens.

Tagline: James Bovard is author of The Farm Fiasco and the forthcoming The Myth of Fair Trade.