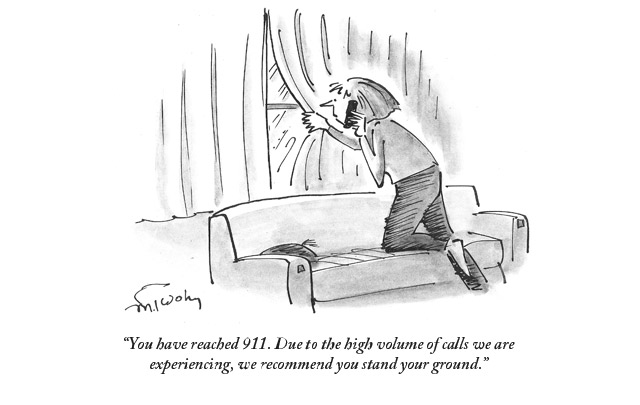 Progress! Even New Yorker cartoonists now understand the imperative of people not relying on police to save their necks….

(Okay, maybe that is not the interpretation the magazine hoped for, but…)

A dozen years ago, I wrote a forward for a book entitled Dial 911 and Die, by Richard Stevens and Aaron Zelman. Here’s my two cents:

Not every firearms regulation leads inexorably to genocide. But, as this sweeping historical study shows, supposedly “reasonable measures” such as licensing and registration of gun owners have been followed too many times in recent history by government atrocities. The issue is not the supposed good intention of reformers who seek to reduce private gun ownership: The issue is the nature of political power.

Aaron Zelman and Richard Stevens’s book vividly reviews and analyzes the slaughter of disarmed populaces from the Turkish slaughter or the Armenians to Stalin’s slaughter of the peasantry to the Guatemalan slaughter of Indians. The book goes in-depth into the bloodbath that was the Third Reich, as well as the Khmer Rouge urban renewal experiments, Mao’s depredations, and other atrocities. The book also recounts the abuse that Blacks suffered in the United States after laws were passed them to disarm them – for the convenience of the Klan and other marauders.

Governments around the world have stripped hundreds of millions of people of their right to own weapons and then left them to be robbed, raped, and slaughtered.

Some people may try to dismiss Zelman and Stevens’s distrust of politicians as unAmerican. But the distrust of politicians grabbing guns has a long and honorable history in this country. The American revolutionaries were concerned about the potential for unlimited power inherent in British laws and policies. The initial conflicts at Lexington and Concord occurred because British regiments were marching out to confiscate the colonists’ arms caches. The British assumed that seizing the weapons would quell resistance to the expansion of their power. George Mason, the father of the Bill of Rights, later declared that the British decided that “to disarm the people . . . was the best and most effectual way to enslave them.” If the colonists reasoned like some contemporary Americans, they would have interpreted the British troops’ attempt to seize their guns as proof of how much they cared about the colonists.

Many proponents of restrictions on firearms ownership insist that the specific measure they champion can have little or no adverse impact on people’s freedom. Americans of the Revolutionary Era recognized that the passage of a law does not signal the end of a political onslaught. Instead, it is merely the starting point for a push to further extend government in the same direction—to pursue the “logic” of a new act to its conclusion. As James Madison wrote in 1787, “The sober people of America . . . have seen that one legislative interference is but the first link of a long chain of repetitions, every subsequent interference being naturally produced by the effects of the preceding.” Unfortunately, most contemporary Americans are complacent or naive about politicians planting their flag on new turf.

Politicians continually complain about “loopholes” in existing gun laws as a pretext to enact new gun laws. But the ultimate loophole is freedom: the principle that citizens should not be forced to be dependent on often lackadaisical government employees for their own safety and survival. Every restriction on citizens’ rights to acquire and carry firearms means increasing citizens’ subordination to government employees who are authorized to carry such weapons.

The primary effect of a prohibitions on private gun ownership is to vastly increase the power of politicians. But political tyranny has destroyed far more lives in the last century than have abusive private gun owners. Unfortunately, gun control advocates offer no solution to the problem of political tyranny – almost as if the problem will disappear if we all pretend government is our friend.

On gun control, we have to judge politicians as a class by their records, not by empty promises which can never be enforced after citizens have been disarmed. Gun control laws ultimately rest on the trustworthiness of the political ruling class. The only way that firearms could be less vital to defending freedom now than in the past is if politicians were no longer dangerous. But there is no trigger guard on political ambition.

13 Responses to New Yorker Cartoon: 911 is Busy, so Stand Your Ground