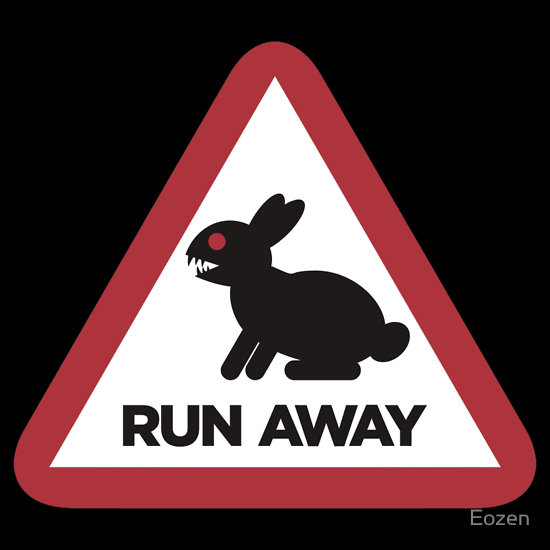 OK, I wasn’t an Easter Rabbit.  I was a Beatrix Potter promotion rabbit.  But rabbits are rabbits dammit. And as Attorney General John Ashcroft always said, “terror is terror.”

The following is from the section of “Playing Left Field in Boston” chapter of Public Policy Hooligan on the various jobs I did to pay the rent.  That chapter uses quotes from two of my early philosophical inspirations, Thoreau and Emerson, to frame my non-philosophical experience living in Massachusetts.

Thoreau wrote in Walden: “What is a country without rabbits and partridges?”

I have my dignity. I never worked as a partridge. But I did serve time as a Killer Rabbit.

Technically, it wasn’t a “Killer Rabbit” – but merely a prop in a Beatrix Potter promotion at a Filene’s department store. The rabbit suit was as comfortable as wearing a half dozen winter coats encased in an old-fashioned diving bell.

I suspected the artist who crafted the rabbit’s face was disgruntled. Or maybe he missed his meds that week. Instead of a loveable, carefree bunny, this Peter Rabbit looked like he should be swinging a chainsaw in a “Friday the 13th” movie. I was the Cottontail from Hell.

As I was lumbering around the store, one woman came around the corner, saw my bulging, bloodshot eyes and my canine grimace, and began screaming as if she expected to be torn from limb to limb.

Filene’s assumed the Beatrix Potter event would bring out droves of parents and kids. Didn’t happen. So the store was stuck with a giant rabbit and a photographer, and no gaggle of kids. A quick-thinking manager decreed that sales girls could have free “souvenir photos.” (Perks were pitifully few on that job.) I never had so many women clambering on my lap before or since. But the outfit was thick enough that it remained platonic, at least for me.

My Beatrix Potter debut occurred a year before rabbits entered the Pantheon of American Politics. President Carter was fishing in Georgia when a rabbit bee-lined for his rowboat – “hissing menacingly, its teeth flashing and nostrils flared and making straight for the president,” according to Wikipedia. The rabbit fled after Carter thumped it with an oar. But Republicans seized upon the incident to portray Carter as a feckless leader and did their best to portray that rabbit as Carter’s running mate in the 1980 election.