Why the California Raisins Have Stopped Singing

Using 1930s-era regulations, the USDA can commandeer up to half a farmer’s harvest.

Earlier this month the Ninth U.S. Circuit Court of Appeals ruled that the U.S. Department of Agriculture taking 47% of a farmer’s harvest does not violate the Fifth Amendment’s takings clause as long as the government aims to drive up crop prices. The May 9 decision was the latest absurdity in a decade-long legal battle pitting California raisin growers Marvin and Lena Horne against the USDA’s outmoded raisin regulatory regime.

Under current law, the 1930s-era federally authorized Raisin Administrative Committee can commandeer up to half of a farmer’s harvest as a “reserve”—to purportedly stabilize markets and prevent gluts. The Hornes were fined almost $700,000 for refusing to surrender control of 47% of their 2002 harvest to the government committee and 30% of the harvest the following year. After judges declared that the Hornes could not sue in federal court for unjust takings—i.e., government confiscation without just compensation—the case landed in the Supreme Court.

Last June the Supreme Court unanimously ruled that California raisin growers have standing to file a takings claim in federal court. Even liberal justices were amazed at the heavy-handed, archaic nature of the regulatory regime. During oral arguments, Justice Stephen Breyer declared: “I can’t believe that Congress wanted the taxpayers to pay for a program that’s going to mean they have to pay higher prices as consumers.” Justice Elena Kagan suggested that the statute authorizing the raisin cartel could be “the world’s most outdated law.”

Writing as if they were inspired by Justice Kagan’s quip, the Ninth Circuit panel reached back a hundred years to justify perpetuating federal control of the raisin business. The decision declared, “Raisin prices rose rapidly between 1914 and 1920, peaking in 1921 at $235 per ton. This surge in prices spurred increased production, which in turn caused prices to plummet back down to between $40 and $60 per ton.” Crop prices skyrocketed during those years in large part because the World War I-era U.S. Food Administration cornered markets and vastly inflated demand by providing cheap credit to European allies to purchase boatloads of harvests. Federal intervention spurred a boom and bust that ravaged American farmers in the early 1920s.

The Agricultural Marketing Agreement Act of 1937 authorized the secretary of Agriculture to appoint farmer-dominated committees to control production. The subsequent crop marketing orders were based on the New Deal philosophy of “managed abundance”—prosperity through “universal monopoly and universal scarcity.” The Ninth Circuit decision quotes a 1943 Supreme Court ruling justifying regimenting raisin farmers because the industry became “compelled to sell at less than parity prices.”

But the parity index was concocted by government agricultural economists in the 1920s to justify federal aid to farmers. “Parity” was based on a set ratio of farm prices to nonfarm prices, in correlation with the ratio that prevailed in 1910-14, a boom time for farmers. Because production costs for both farm and nonfarm goods radically changed, it never made any economic sense to rely on “parity” but it was a popular political ploy.

The Ninth Circuit judges’ curiosity seemingly never extended beyond reading USDA press releases. Their decision this month declared that “the Marketing Order ensures ‘orderly’ market conditions by regulating raisin supply.” But the raisin committee’s sweeping powers have failed to prevent vast swings in prices farmers receive. Many California farmers have shifted their land to other crops; the acreage devoted to raisin production has plunged since 2000. The Ninth Circuit effectively declared that a taking is not a taking if the government intends to benefit the victim, regardless of how much damage the government inflicts.

The judges played down the Hornes’ losses because they only involved “personal property”—not “real property” such as land. This is a slippery distinction that at least one other federal appeals court has utterly rejected. The decision stressed that the “Hornes did not lose all economically valuable use of their personal property,” presumably since the feds did not take all their raisins.

The judges noted that “the Hornes can avoid the reserve requirement . . . by planting different crops” not subject to federally authorized commandeering. Supreme Court Justice Antonin Scalia captured the reality far better when he said in oral arguments in March 2013 that the USDA in effect offers farmers a choice: “Your raisins or your life.”

The Ninth Circuit decision illustrates how judicial docility and economic illiteracy can vest boundless power in bureaucracies. The Hornes will likely appeal to the Supreme Court. This could potentially result in a landmark takings ruling that finally torpedoes the raisin regime and numerous other USDA cartels.

Mr. Bovard is the author, among other books, “Attention Deficit Democracy” (Palgrave, 2006) and “Lost Rights: The Destruction of American Liberty” (St. Martin’s, 1994). 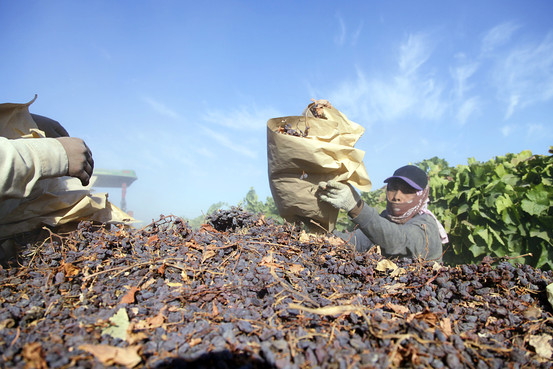 6 Responses to My Wall St. Journal op-ed on The Great Raisin Robbery