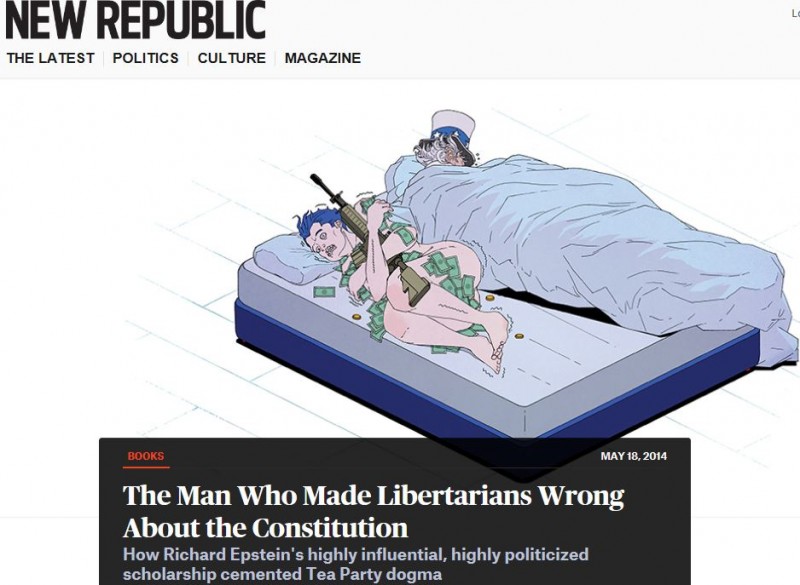 I don’t know about other political skeptics, but I certainly don’t recognize myself in this New Republic portrayal of folks who distrust the government.  I’ve never taken an AR-15 to bed even when I was liquored up bad.

And choosing Cass Sunstein to review Richard Epstein is a hoot. I first sparred with Sunstein when he and I were on a panel at the American Political Science Association’s 1994 panel to discuss his book, Democracy and the Problem of Free Speech.

From Sunstein’s view, freedom causes one damn problem after another.  I tagged a book he co-wrote in Playboy in 1999.  The subsequent back-and-forth with his angry co-author proved the only chance in my career (thus far) to work in a reference to “Flying Philadelphia…” in a high-circulation print publication.  I also paid my disrespects to him in the Freeman in 2000 and in a 2010 piece for the Future of Freedom Foundation – which is reprinted below.

Sunstein, formerly a law professor at the University of Chicago, has long spearheaded an intellectual attack on the Bill of Rights. In The Cost of Rights: Why Liberty Depends on Taxation, Sunstein and Princeton political-science professor Stephen Holmes offer this definition of the old (negative) and new (positive) rights, or, as they put it, the difference between liberties and subsidies:

Those Americans who wish to be left alone prize their immunities from public interference, it is said, while those who wish to be taken care of seek entitlements to public aid. Negative rights ban and exclude government; positive ones invite and demand government…. Negative rights typically protect liberty; positive rights typically promote equality. The former shield a private realm, whereas the latter reallocate tax dollars…. If negative rights shelter us from the government, then positive rights grant us service by the government. The former rights include the rights of property and contract and, of course, freedom from being tortured by the police; the latter encompass rights to food stamps, subsidized housing and minimal welfare.

In order to untangle these fallacies, we need to roll back the clock to the late 1700s.

The Declaration of Independence proclaims that all men are “endowed by their Creator with certain unalienable Rights.” And that to secure these rights, Thomas Jefferson wrote, “governments are instituted among men.”

The Founding Fathers constructed one such government, limiting its powers to certain well-defined functions.

Two years after the Constitution was ratified in 1788, James Madison drafted the Bill of Rights to create a bulwark between the individual and the state. As Syracuse University political-science professor Stephen Macedo described it, the Founding Fathers saw government as an island in a sea of rights. The rights enumerated were those grounded in the American experience: the right to assemble, the right to free speech, the right to worship God in one’s own way, the right to keep and bear arms, the right to a speedy and public trial by an impartial jury, the right to be left alone by the state (freedom from unwarranted search and seizure), freedom from self-incrimination (coerced confessions), and freedom from cruel and unusual punishment. The Ninth Amendment states simply “The enumeration of certain rights, shall not be construed to deny or disparage others retained by the people.” The Tenth Amendment underscores the point that the true repository of rights is the individual.

The Founding Fathers sought to curtail government. Their notion of freedom was described this way: “Society whose laws least restrain the words and actions of its members is most free.”

For 150 years, that formula worked fine. As recently as 1923, the Supreme Court celebrated the breadth of personal freedom:

The term [liberty] has received much consideration. Without doubt, it denotes not merely freedom from bodily restraint but also the right of the individual to contract, to engage in any of the common occupations of life, to acquire useful knowledge, to marry, to establish a home and bring up children, to worship God according to the dictates of his own conscience and generally to enjoy those privileges long recognized at common law as essential to the orderly pursuit of happiness by free men.

Unfortunately, the notion of the citizen’s inviolable right to liberty is vanishing from the American political landscape. Indeed, the government scorns the individual and treats as suspect the exercise of such rights.

Some trace the shift to President Franklin Roosevelt. In 1933 he announced, “We have all suffered in the past from individualism run wild.” Naturally, the corrective was to let government run wild.

The taxpayer would pay for those new rights, and the government would control the reallocation of resources. Roosevelt talked of using the power of government to crush “the few slackers or troublemakers in our midst,” the “small group of selfish men who would clip the wings of the American eagle in order to feather their own nests.”

He pitted individual liberty against the interests of all (as fathomed by government). He would not be the last. Presidents to follow seemed perfectly willing to reconsider the nation’s original concept of freedom. In 1994 Bill Clinton offered this idea:

When we got organized as a country and we wrote a fairly radical Constitution with a radical Bill of Rights, giving a radical amount of individual freedom to Americans, it was assumed that the Americans who had that freedom would use it responsibly … that they would work for the common good, as well as for the individual welfare…. A lot of people say there’s too much personal freedom. When personal freedom is being abused, you have to move to limit it.

Some Americans recognized the grave peril that Clinton’s doctrine posed, but the media cheered him, as usual.

The birth of government

The shifting definition of rights — of freedom itself — raises the question of whether people will benefit more from being left to build their own lives or from somebody’s confiscating much of their building material and imposing the structure he thinks is best.

The debate has shifted from the ideal to the monetary. The Tax Foundation calculates that an American works the equivalent of almost five months before any money he earns goes into his own pocket.

Sunstein and Holmes claim this is a storybook distinction. Both positive and negative rights, they argue, depend on the existence of government. Rights cost money. Rights cannot be protected or enforced without public funding and support. All rights make claims on the public treasury. Rights without remedy are no rights at all.

The individual has no preexisting rights; his sole responsibility is to contribute his share (or what the government dictates is his share) to the public coffers to protect his government-given rights. Government beneficence hides the erosion of the old order of freedom. The fact that the government imprisons more people now than ever before is irrelevant, because government is bestowing more benefits than ever before. It is as if the benefit automatically outweighs the shackle and therefore nullifies the existence of the shackle.

In perhaps their most creative passage, Sunstein and Holmes reveal,

Our freedom from government interference is no less budget-dependent than our entitlement to public assistance. Both freedoms must be interpreted. Both are implemented by public officials who, drawing on the public purse, have a good deal of discretion in construing and protecting them

In a stroke, basic freedoms are reduced to line items in a budget. Something as essential as religious freedom is put on a par with some congressman’s pork project. Like moral accountants, Sunstein and Holmes try to calculate the cost of essential rights. In 1992, they claim, the administration of justice in the United States — including enforcement, litigation, adjudication, and correction — cost taxpayers around $94 billion. An average jury trial costs approximately $13,000. The authors assure us that “included in this allocation were funds earmarked for the protection of the basic rights of suspects and detainees.”

Because the government spends a minuscule percentage of tax revenues on the administration of court systems, citizens are supposed to pretend that government is their liberator.

Under this theory every failure of government is the citizens’ fault. Sunstein notes,

In other words, police routinely carry out unconstitutional searches with impunity because taxes are not high enough to prevent them. Taxation, not moral outrage, shields citizens from abuse. “To take the cost of rights into account is therefore to think something like a government procurement officer, asking how to allocate limited resources intelligently while keeping a wide array of public goods in mind.”

Holmes and Sunstein work overtime to attribute every freedom to government intervention, asserting,

Religious liberty is certainly no more costless than other legal rights. American citizens are more or less free to worship or not, as they wish, but their freedom in this respect makes a claim upon the public fisc, even when it is not subsidized out of public budgets (through, for example, police and fire protection of churches and other religious institutions).

If a single cent of government money could conceivably be involved in some activity, the entire activity becomes the equivalent of a government handout. And regardless of how much tax a person pays, if a person receives any benefit from any government activity, that person becomes the moral equivalent of a public housing resident who never worked a day in his life. Despite the Founding Fathers, today’s rights have become an island in a sea of government. The Bill of Rights is a theme park, and we buy tickets from Uncle Sam. That’s not how the men who formed this country conceived it, and that’s not how it should be. Americans must recognize the peril posed by Sunstein and his statist doctrines.

FFF: How I Learned Not to Shovel
My Wall St. Journal op-ed on The Great Raisin Robbery

3 Responses to New Republic Gets Libertarians All Wrong