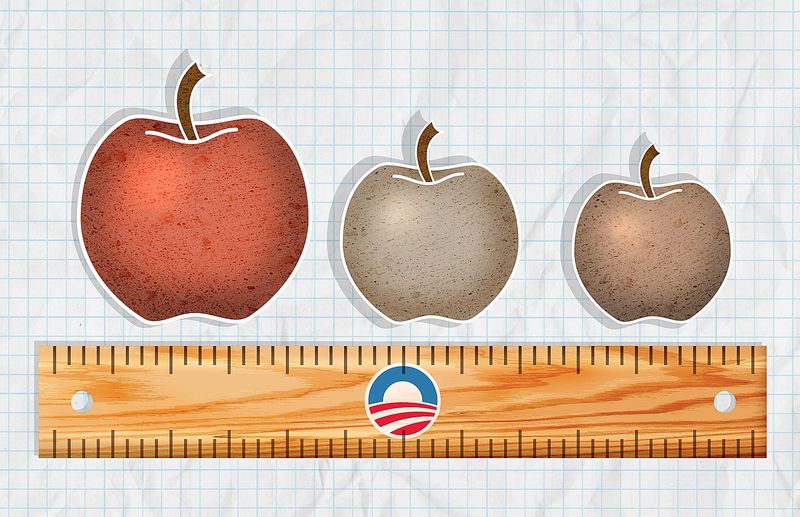 Obama’s Racial Profiling in the Classroom

President Obama and his appointees are hailing this month’s 60th anniversary of the Supreme Court’s landmark school-desegregation decision, Brown vs. Board of Education. Mr. Obama proclaimed that “we must continue striving toward equal opportunities for all our children” and “reaffirm our belief that all children deserve an education worthy of their promise.” However, thanks to Mr. Obama, black and Hispanic students are increasingly being stigmatized with lower expectations.

The Bush administration’s No Child Left Behind Act of 2001 promised that all students would be proficient at reading and math by this year. Schools missed this utterly unrealistic goal by a country mile. The Obama administration set a lower target — pressuring states to create detailed plans to reduce by 50 percent the achievement gap between different races of students by later this decade. The feds have approved plans by 26 states that set lower achievement goals for black and Hispanic students, as Education Week reported.

States that fail to meet federal demands risk forfeiting billions of dollars in federal school subsidies for their schools. The federal Education Department approved Tennessee’s plan to raise the passing rate for English 2 courses for white students to 81.1 percent by 2017, while the passing rate for black students rises to only 63.9 percent. Kentucky pledged that for 2013, 56.2 percent of white elementary schoolchildren would read proficiently — and 34.8 percent of black children.

Florida’s official plan calls for 88 percent of white students to be able to read at grade level by 2017-18, while only 74 percent of black and 81 percent of Hispanic students are expected to reach the same level. The Florida PTA condemned the new scoring system in 2012: “By setting ethnicity-based goals, the door is open for continued discrimination.” Earlier this month, activists dropped off almost 6,000 petitions in Tallahassee, Fla., urging Gov. Rick Scott to abolish race-based education goals.

In most places, racial double scoring was quietly adapted as simply another bureaucratic finagling to keep federal cash flowing into state coffers. Elois Zeanah, president of the Alabama Federation of Republican Women, declared that there was “no way would these standards, which have racial overtones, be accepted if there had been an opportunity for public debate. Parents have no idea that their elected state education officials and the state superintendent of education are forcing different standards on their children based on their family income and race.”

The double standards also provoked an outcry in Virginia. State Sen. Mamie Locke, the chairman of the Virginia Legislative Black Caucus, protested: “We believe that education is the ‘great equalizer’ in our society and that our system of public education must remain viable and strong. The state’s new system of benchmarks for performance is antithetical to this goal.” The state branch of the NAACP also denounced the new scoring regime.

The Education Department is requiring states to specify exactly how far each racial and ethnic group of students at each school will progress over the next several years. The spreadsheet for Washington state’s formal plan for each school contains more than 47,000 separate lines. This is a level of education planning akin to the Soviet central planners who pretended to foretell the yields for every crop on every collective farm in the next Five Year Plan. In the same way that collective farms submitted grossly exaggerated harvest data to Moscow, many local schools have been caught providing bogus test results to make it appear they are fulfilling the central education plan.

The new policy is replete with perverse incentives. Since the goal is to cut in half the achievement gap, the more that whites and Asians excel in reading and math, the more difficult it becomes to narrow the spread.

Mr. Obama has only been challenged once in public about his administration’s racial scoring mandate. NBC reporter Savannah Guthrie asked: “We have a situation in America, in 2012, where you have African-Americans expected not to reach the same level of proficiency as white in certain subjects. And I just wonder, on a gut level, does that bother you?” Mr. Obama replied: “Of course it bothers me … . We’re still going to disaggregate the information about black, white and Hispanic kids, to make sure that everybody’s moving. But moving toward this growth model of how you measure the job that a school’s doing gives every school an opportunity to continually improve without labeling them as failures, and then not giving them the resources that they need to actually step up.” Since the reporter merely asked Mr. Obama how he felt about the double standards and failed to ask any follow-up questions, the president slid by with a flurry of empty phrases.

If Lester Maddox — one of the most racist governors in the 1960s — had officially announced lower learning goals for blacks in Georgia’s schools, he would have been tarred by every editorial page north of the Mason-Dixon Line. However, when Mr. Obama and Education Secretary Arne Duncan strongarm states to set lower goals for blacks and Hispanics, there is scant protest from respectable venues. Because it is a given that they could not have bad motives, their policies received little or no scrutiny.

Federally mandated racial profiling in the schools is a giant step backward for America. Proclaiming a goal of reducing the achievement gap is no excuse to codify lower expectations for black and Hispanic students. It would be far better for policymakers to recognize that students are individuals instead of pigeonholing them into groups with vastly different expectations.

James Bovard is the author of “Attention Deficit Democracy” (Palgrave, 2006) and “Lost Rights: The Destruction of American Liberty” (St. Martin’s, 1994).

* Thanks to Greg Groesch for the excellent illustration