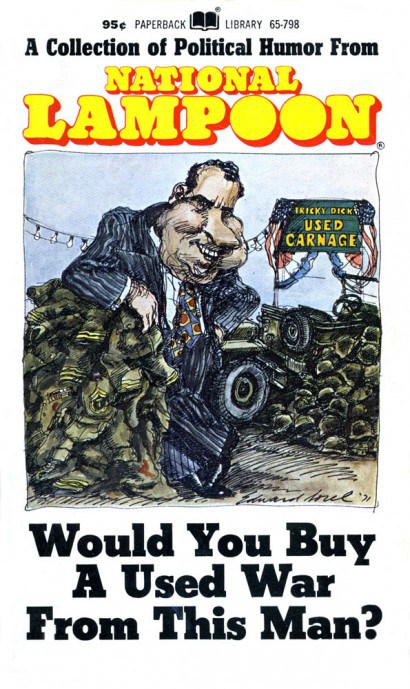 I recall how my liberal friends assured me in 2008 that Obama would launch a brave new era in American politics. As Obama unleashes the bombs on Iraq and on Syria, we are back to the same pointless killing that defined the George W. Bush administration.  I hope that more of the folks who courageously and publicly opposed Bush’s warmongering will take a stand against the same Pandora’s Box that Obama is opening.

This cover of a 1972 National Lampoon collection of political cartoons is unfortunately perfect for today’s follies.  Except that when Obama claims that his “used carnage” is a triumph for human rights, much of the media will saint him as a savior of humanity.

Can’t Obama come up with something aside from pointless killing to boost his approval ratings?

One Response to Obama Reincarnates Nixon in Hustling a “Used War”