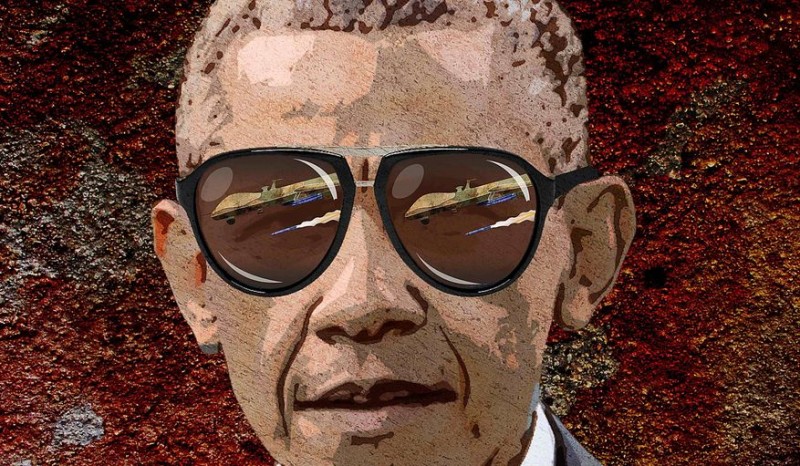 In his speech last month to the United Nations, President Obama summoned foreign leaders to join his “campaign against extremism.” While his clarion call was spurred by beheadings by the terrorist group the Islamic State, Mr. Obama has repeatedly invoked the “extremist” threat since taking office in 2009. However, the president’s own record makes it tricky for him to pirouette as the World Savior of Moderation.

Republican presidential candidate Barry Goldwater was vilified in 1964 for declaring that “extremism in the defense of liberty is no vice.” Nonetheless, Mr. Obama seems to think that seizing unlimited power in the war against extremism is a virtue.

As part of his ever-broadening campaign against potential enemies, the president now claims a right to kill Americans and foreigners without a trial, without notice and without any chance for targets to legally object. He has authorized drone attacks that have killed thousands of people in Pakistan, Yemen, Somalia and elsewhere; the casualties include large numbers of women and children who posed no threat to the United States. At least four Americans have also been executed by drones thanks to White House fiats. As long as some of the victims were linked to purported extremists, we are supposed to cheer Mr. Obama’s pioneering prerogatives for presidential killings.

Although Mr. Obama campaigned in 2008 criticizing the bellicosity of his predecessor, he has bombed seven nations since taking office. Mr. Obama justified pummeling Libya in 2011 so that that nation would not become “a new safe haven for extremists” — but there are far more violent terrorists there now than before the United States intervened. Mr. Obama has written himself a blank check to expand bombing in Iraq and Syria owing to extremist perils — even though the U.S. government previously covertly armed some of the same extremists it is now trying to destroy. The notion that the U.S. government is entitled to bomb foreign lands based solely on the president’s decree — regardless of congressional opposition — would have been considered extremist nonsense by earlier generations of Americans.

Mr. Obama’s war on extremism is so obsessive that neither hypocrisy nor absurdity can impede its advance. Saudi Arabia’s King Abdullah, a charter member of Mr. Obama’s latest crusade, last week denounced religious extremism as a perversion. The fact that the Saudis have beheaded vastly greater numbers of people than the Islamic State seems to have vanished from the Washington storyline (or maybe pundits think that people convicted of “sorcery” got what they deserved). Having the Saudis join a war against extremism is like enrolling the mafia in a campaign against abusive loan-collection practices.

The peril of extremism has also helped negate the Fourth Amendment’s prohibition on warrantless, unreasonable government searches. Prior to the past decade, anyone who asserted that the feds should be allowed to vacuum up scores of millions of Americans’ emails would have been ridiculed as paranoid and authoritarian. When Americans learned in mid-2013 that the National Security Agency (NSA) was doing exactly that, the Obama administration initially denied the facts and then later invoked national security to justify the mass intrusion. However, the NSA is so paranoid that its definition of terrorist suspect — i.e., extremist — includes “someone searching the Web for suspicious stuff.”

While Mr. Obama acts as if extremism is a self-evident offense, his administration continually broadens the definition of potential enemies — or at least troublemakers. The Department of Homeland Security has attached the “extremist” tag to gun-rights activists, anti-immigration zealots, and individuals and groups “rejecting federal authority in favor of state or local authority” — even though many of the Founding Fathers shared the same creed. A 2012 Homeland Security report went even further, stating that being “reverent of individual liberty” is one of the traits of potential right-wing terrorists. Such absurd standards help explain why the federal terrorist watchlist now contains more than a million names — and is thus far less effective at alerting to actual perils to public safety.

Prior to Mr. Obama’s taking office, people who suggested that Uncle Sam is entitled to take naked snapshots of all airline passengers would likely have been tagged as extremists and maybe also perverts. The Transportation Security Administration (TSA), with its whole-body scanners, has pioneered the demolition of Americans’ privacy. The TSA’s promises that such photos will not be stored or abused are as credible as the agency’s earlier promises that no one would wait more than 10 minutes in TSA screening lines. TSA agents sometimes harass travelers who “opt out” from nudie scanners as if they are the dangerous extremists.

“Extremism” is even more vaporous than “terrorism.” With terrorism, at least the individual or group is purportedly committing (or planning to commit) some violent act. An extremist, on the other hand, is someone with a bad attitude who might do something unpleasant in the future. Crackdowns on potential extremists can provide the perfect tool to demonize political opposition at home and abroad. Should we assume that the feds are justified in secretly destroying anyone who is less moderate than Mr. Obama?

In his first speech to Congress in early 2009, the president declared, “To overcome extremism, we must also be vigilant in upholding the values our troops defend — because there is no force in the world more powerful than the example of America.” Unfortunately, Mr. Obama seems to have long since forgotten his early admonition. Instead, he has taught the world how easy it is to seize new powers based on the shakiest pretexts. How long will it take Americans to repeal Mr. Obama’s anti-extremism excesses?

Thanks to Greg Groesch for the superb artwork

Obama’s Harebrained Scheme for Benevolent Carnage Exposed
FFF: How Tariffs Helped Cause the Civil War and Other Disasters

One Response to Wash. Times: Obama Fighting Extremism with Extremism