President Obama and a heap of other politicians are imploring us to view voting as the ultimate expression of our freedom and self-government. The reality is that the vast majority of politicians will do as they damn well please after Election Day.

Edward Snowden’s revelations should have been a battering ram to use against the incumbent party. Instead, the National Security Agency’s crimes seem to have all been forgotten.

The Senate report on CIA torture has been stonewalled for years. The Obama administration succeeded in delaying the release until after tomorrow’s elections – perhaps to avoid its grisly revelations from distracting from the president’s denunciations of cynicism.

Obama’s Syrian war became far more of a debacle this weekend when masses of “moderate” Syrian fighters defected to ISIS. But almost no one on the campaign trail is holding the administration liable for plunging the nation into another pointless (and mindless) war.

Regardless of the results tomorrow, Americans can expect a continued bipartisan conspiracy against their rights and liberties.

One bright side – if the Republicans win big, it may become more difficult for Obama & team to coverup their abuses and crimes. And that could sow some seeds that will later haunt the political establishment.

Or maybe this cartoon best captures how voters should feel on their way to the polling booth.  (from the new issue of the New Yorker) 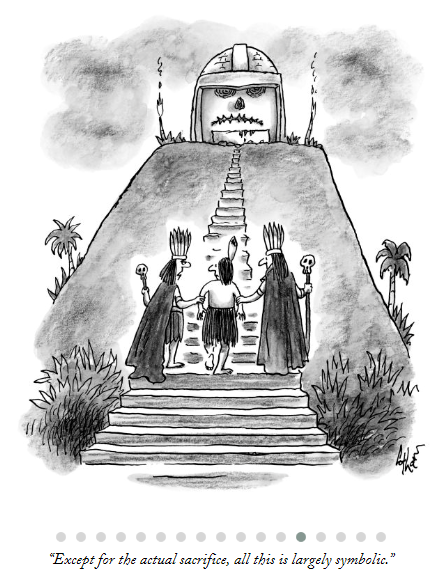