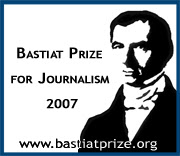 I was happy to learn this afternoon that I am one of six finalists for the Reason Foundation’s Bastiat Prize for Journalism. Frederic Bastiat was one of the most eloquent and incisive economists of the 19th century.  He set the gold standard for lucid, courageous policy writing.  And he was an uncompromising champion of freedom.

The award winners will be announced next month in New York City.