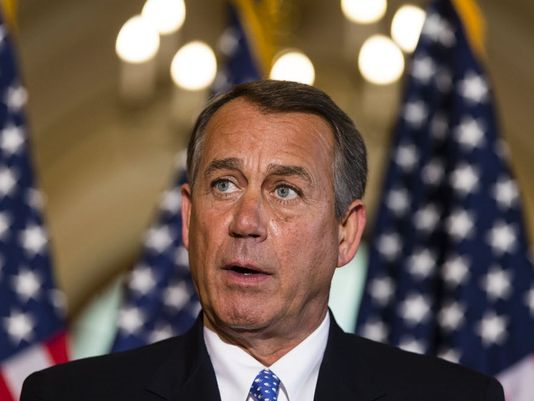 Freedom gets a foyer; Liberty gets the shaft

The budget agreement between President Obama and leaders of the House of Representatives is sparking a conservative firestorm across the land.  Newt Gingrich predicts every Republican presidential candidate in tonight’s debate will oppose the deal — which a New York Times headline aptly labels “a victory for Obama.”

But the deal fulfilled one of retiring House Speaker John Boehner’s passionate aspirations. Section 1201 of the bill decrees that “[t]he first floor of the area of the House of Representatives wing of the United States Capitol known as the small House rotunda is designated the ‘Freedom Foyer.’”

Renaming a few square yards in a government building is being lauded as if it were a grand finale in Boehner’s legislative career. But like many of the purported budget cuts in the budget deal, this christening looks squirrely. Boehner actually designated that turf as the “Freedom Foyer” in late 2013 and has touted it sporadically ever since.

Boehner and Republican allies hope that the Freedom Foyer gambit will tamp down conservative outrage at their approval of sharply increased federal spending. But the two-year budget deal also signals surrender on any broad-based attempt to curb abuses of federal executive agencies for the remainder of Obama’s presidency.

The Founding Fathers expected the entire Congress to be a “freedom foyer” that jealously guarded the people’s rights and liberties against oppression by the executive branch — the same way that Parliament had defended the English people against tyrannical kings. But now citizens are supposed to be content with re-labeling a room as a substitute for Congress actually performing a vital task.

Perhaps citizens who have been oppressed by the Internal Revenue Service, National Security Agency, Transportation Security Administration or other heavy-handed agencies can make sacrificial offerings in the Freedom Foyer in lieu of getting help from their member of Congress. Actually, the Capitol Police might descend and quickly handcuff any visitor who did anything more elaborate than curtsying to the busts of foreign dignitaries in that room.

The Freedom Foyer christening may have been one key to securing enough congressional support to raise the debt limit by over a trillion dollars. What will that cost the typical American taxpaying household over their lifetimes? Probably at least $10,000 — not counting the interest for servicing the debt.  How many taxpayers would have voluntarily paid that price for that Capitol honorific? Probably less than 0.01%.

Besides, designating a room in the Capitol as the Freedom Foyer may have no more lasting impact than renaming a dead-end street for a deceased city council member. After a few years, politicians or bureaucrats can reap another round of applause for re-titling that same street after some other recently-deceased dignitary. Likewise, if Bernie Sanders is elected president with a large Democratic majority in Congress, “Freedom Foyer” could be renamed “Equality Place” on his first week in office. Or Hillary could rename it the “Sacred Sisterhood Square.” Or Trump could label it the “Trump Mini-Plaza.”

The Capitol room re-labeling ploy is typical of how politicians nowadays invoke freedom in lieu of leashing Leviathan. As a result, politicians prattle about freedom at the same time that tax exactions, prison populations and regulatory decrees have soared. Washington has been hollowing out the meaning of freedom for decades, using the term as a coat of varnish for any government program that seemed otherwise dubious. As a result, few people may realize the absurdity of the christening curtsy in a bill that unleashes federal spending.

While some congressmen believe the Freedom Foyer is a substantive achievement, far more Americans will be directly impacted by another small provision in the budget deal. Congress is authorizing debt collectors to begin making automated calls to cell phones to hound people about their alleged IRS debts. Federal revenuers have a long history of wrongfully demanding payoffs from innocent taxpayers, snaring billions of dollars that citizens do not owe. Congress rubber-stamped robocalls for tax collection despite the profusion of telemarketer scam artists who are already falsely claiming to represent the IRS to frighten people out of their money.

It would be naive to expect Congress to stand up for the rights of average Americans against a federal agency commandeering their assets. But perhaps congressional leaders will offer us another Solomonic solution such as renaming the Internal Revenue Service the “Freedom Finance Agency.” And there might be some Republicans who would expect Americans to be grateful when Washington throws them that bone.

James Bovard is the author of Attention Deficit Democracy and a member of USA TODAY’s Board of Contributors.

2 Responses to USA TODAY: The Freedom Foyer Fraud on Our Liberty