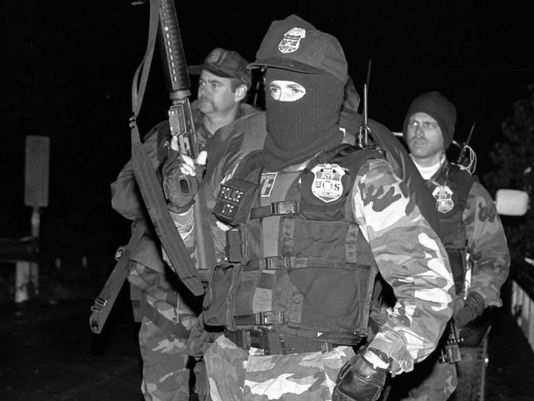 Do federal agents need a license to kill in order to protect us?  Unfortunately, federal judges are giving law enforcement agents blanket immunity when they shoot Americans while the agents are on the job. It would be difficult to imagine a greater violation of equal rights under the law or a bigger mockery of due process.

After Larry Jackson, Jr., of Austin, Texas, was killed by a policeman in 2013, a local prosecutor indicted the policeman on manslaughter charges. Jackson’s family claimed that he had been executed by the policeman but a federal judge granted immunity from prosecution because the policeman “was acting in his capacity as a federal officer.” The ruling in the Austin case could extend federal immunity from prosecution for shootings to “hundreds, if not thousands, of state and local police officers who participate in federal task forces,” the Washington Post noted.

Federal officers have been involved in 33 killings so far this year. The Justice Department almost never prosecutes federal agents for shootings in the line of duty, and the feds have invoked the Supremacy Clause of the Constitution to block state and local prosecutions of federal agents in recent decades. The ruling in the Austin case “raises the question of when, if ever, a federal law enforcement officer can be charged with a crime for killing someone in the line of duty,” the Post noted.

The best-known case of immunity for federal officers involves Lon Horiuchi, the FBI sniper who in 1992 gunned down 42-year-old Vicki Weaver as she stood in a cabin doorway in Ruby Ridge, Idaho holding her 10 month-old-baby. Horiuchi previously shot her husband, Randy Weaver, who was outside the cabin and under indictment on a federal firearms charge. A confidential Justice Department report condemned Horiuchi for taking a shot with a high-powered rifle through a cabin door when he believed someone was standing behind it. But other Justice Department and FBI officials warned that permitting Horiuchi to be prosecuted would have “an enormously chilling effect on federal operations, especially law enforcement.” A local prosecutor indicted Horiuchi on manslaughter charges anyhow.

But federal judge Edward Lodge ruled in 1998 that Horiuchi could not be tried for killing Vicki Weaver because he was a federal agent on duty, and thus effectively exempt from any jurisdiction of state courts. Lodge focused on Horiuchi’s “subjective beliefs”: as long as Horiuchi supposedly did not believe he was violating anyone’s rights or acting wrongfully, then he could not be guilty. The judge even blamed Vicki Weaver for her own death. Lodge decreed that “it would be objectively reasonable for Mr. Horiuchi to believe that one would not expect a mother to place herself and her baby behind an open door outside the cabin after a shot had been fired and her husband had called out that he had been hit.” Thus, if an FBI agent unjustifiably shoots one family member, the government apparently receives a presumptive right to shoot any other family member who fails to hide.

The U.S. Marshals Service has been involved in 18 killings this year — more than any other law enforcement agency in the nation. But U.S. marshals enjoy de facto immunity for any use of force in the line of duty. Marshals Service spokesman Drew Wade told the Washington Post that “he could not recall a case that led to criminal charges.”

Prior to Horiuchi killing Vicki Weaver, 14-year-old Sammy Weaver and a family friend encountered a team of three undercover U.S. marshals who had taken up a “defensive position” not far from the Weaver’s residence; one of the marshals fatally shot Sammy. According to the friend, Sammy was leaving the scene when he was shot.

Even though the marshals’ statements and testimony on the conflict were riddled with contradictions, the Marshals Service gave its highest valor award to the marshal who killed the young boy and the other undercover marshals who provoked a firefight (in which one marshal was killed).

Judges tend to presume that killings by federal agents are immune from prosecution even though agencies are notorious for covering up the confrontations. As the Post noted, “details about shootings involving federal officers tend to be particularly closely held.” It took the Post almost two months to simply learn the name of a man killed during a recent FBI pornography raid in Chester, Penn.

It is absurd to presume that police are guilty any time they shoot a private citizen during a confrontation. But it is equally absurd to presume that all law enforcement agents are sacrosanct and all their killings justified. America is at risk of becoming a two-tiered society: those whom the law fails to bind and those whom the law fails to protect.

James Bovard is the author of Attention Deficit Democracy and a member of USA TODAY’s Board of Contributors.