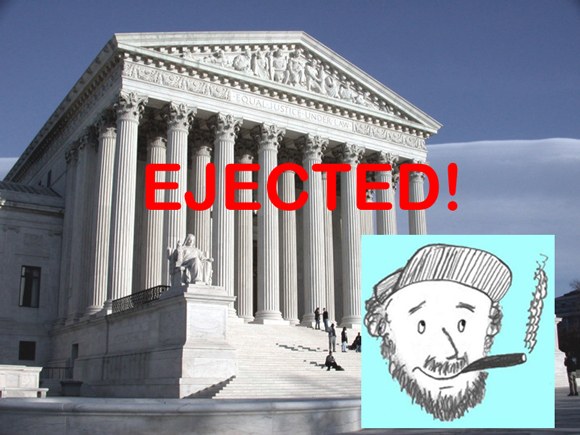 “You should never wear your best trousers when you go out to fight for freedom and truth,” the Norwegian playwright Henrik Ibsen declared in his famous play An Enemy of the People.  Unfortunately, the justices on the Supreme Court of the United States — the sacred burial ground of Americans’ rights and liberties — are not members of Ibsen’s fan club.

I learned this bitter truth in March 1995, when I was in the press box at the Supreme Court watching lawyers wrangle over a case of great principle and tawdry details. Sharlene Wilson was a repeat offender and former government snitch who had been nailed for two sales of marijuana totaling $105. The state of Arkansas — which could not afford to pave many of its own roads — planned to spend hundreds of thousands of dollars incarcerating Wilson for the next 30 years. I was covering the Court’s oral arguments for Playboy magazine.

This case bounded up to the Supreme Court because Arkansas police carried out a no-knock raid on Wilson’s home, during which they discovered marijuana and drug paraphernalia. John Wesley Hall, an Arkansas attorney and author of a treatise on the Fourth Amendment, asserted that the no-knock raid was unconstitutional and petitioned the court to overturn Wilson’s convictions for marijuana possession and paraphernalia. (He did not challenge Wilson’s drug-dealing conviction.)

No-knock raids are routinely carried out by SWAT teams wearing masks and black ninja outfits and toting submachine guns. The right to violently batter down a front door necessarily included the right to shoot any citizen who tried to stop the police from invading his home.

And what did it take to justify government’s effectively declaring war on its own citizens?

Flush toilets. Law enforcement agencies were convinced that the slightest delay in barging in could allow residents to flush away small amounts of drugs. The Clinton administration told the Supreme Court that “if the officers knew that … the premises contain no plumbing facilities … then invocation of the destruction-of-evidence justification for an unannounced entry would be unreasonable.” That was typical of the mindless authoritarian approach that the Clinton administration often took in law-enforcement cases before the Supreme Court.

Americans are raised to believe that judicial processes favor truth and fairness, but cravenness is the coin of the realm at the Supreme Court. I watched lawyers grovel before the justices like slaves trying to avoid a whipping. Some justices were martinets, interrupting and browbeating disputants to their hearts’ content. When Chief Justice William Rehnquist mocked one lawyer’s assertion, everyone in the house responded with a polite chuckle.

Hall told the justices that the “knock and announce” rule for police searches goes back to 1603 in English common law — before the Mayflower reached these shores. He included in his brief to the Court a Playboy piece I wrote — “Oops — You’re Dead” — chronicling cases of innocent people killed in no-knock raids.

One of the justices asked Michael Dreeben, the zealous beanpole representing the Justice Department, whether the Clinton administration thought that no-knock entries were always justified. Dreeben magnanimously granted two exceptions: “if, based on confidential informants, the police know that all the drugs in question are stored in relatively indestructible crates,” and second, if cops were searching for stolen televisions, there “would be no reason to believe that the occupants would have any means of being able to destroy the televisions.”

Hall retorted that, according to Dreeben’s logic, “the more drugs you’ve got, the more right you have to an announcement” prior to a police search.

I thought that was hilarious. Alas — my boisterous laugh proved to be a solo performance. All the justices — and dang near everybody else in the courtroom — turned and stared in my direction.

I had not realized that there were different standards for laughter, depending on whether the jokester was wearing a Batsuit. Admittedly, my laugh has often spooked people and it did spark complaints from children when I worked as a Santa Claus at a Boston Filene’s Department store. I’ve also heard that people use tape recordings of my laugh from radio interviews to frighten off flocks of crows.

Here is how the Washington Post’s Al Kamen described what happened next in his “In the Loop” column:

Once in Court, His Shirt Lost Its Appeal

There was freelancer James Bovard yesterday in the front row of the press section at the Supreme Court minding his own business: on assignment from Playboy magazine to cover oral arguments in a case about whether police officers with warrants must knock before entering a home.

About 15 minutes into the argument, a court police officer approached Bovard and told him to move to a rear alcove.

Seems Bovard had violated a Supreme Court rule — one that veteran reporters had never seen enforced — that asks the press sitting in the first two rows of the reserved section to follow the same dress code as those in the section reserved for the bar: coats and ties, general business attire.

It could not be learned whether the court police acted on their own or were prompted by a displeased justice.

A miffed Bovard says it’s not like he had on a T-shirt or anything. It was a light blue, striped, “fancy business shirt” that was from “Lord & Taylor.”

Maybe he should try Brooks Brothers.

After the hearing concluded, I briefly returned to the press room. Several reporters who regularly cover the Court asked what I’d been told when I got the heave-ho. A Washington Post reporter mentioned the episode to Kamen, who gave me a ring. I explained that my laugh had drawn the attention that sparked the ejection. However, my response to his attire question provided a better story and was also the official storyline.

After reading about the incident in the Post, a journalist colleague asked whether I felt terribly embarrassed about the episode.

“Hell no — I wasn’t responsible for that stupid rule,” I replied. If people feel guilty about violating arcane, secret edicts, government agents can always subdue them by pulling out a rule book and proclaiming them “guilty.” The real problem was that I wasn’t permitted to summon police to haul away any justice who voted to uphold some tyrannical federal policy.

The Supreme Court reached a new low in constitutional depravity the following year when it practically defined “innocent owner” out of existence.  The Court upheld the city of Detroit’s confiscation of a Pontiac jointly owned by a married couple after police caught the husband, John Bennis, getting tooted by a prostitute on the front seat. It was business as usual in Detroit, where nearly 3,000 cars were confiscated in 1995 in an effort to crack down on men who patronize hookers.

There was never any evidence that the wife had consented to the use of their vehicle for a dalliance.   During preliminary arguments at the Supreme Court, the Justice Department blamed Tina Bennis for her husband’s illicit use of their auto. Its brief declared that Tina Bennis “did not allege or prove that she took all reasonable steps to prevent illegal use of the car…. [Bennis] claimed only that she lacked actual knowledge that her husband would use the car illegally.” Since she had not hired a detective to stalk her husband, she had no right to complain about losing the family car she co-owned. (This was two years before Mr. Clinton had some difficulties with an intern. I don’t recall that the impeachment articles blamed First Lady Hillary Clinton for her husband’s behavior).

Chief Justice Rehnquist based his decision on an 1827 case involving the seizure of a Spanish pirate ship that had attacked U.S. ships. Regrettably, Rehnquist did not deign to explain the legal equivalence of piracy in the 1820s and contemporary fellatio. The forfeiture was justified as a way to curb prostitution; but since police interrupted before the prostitute finished and was paid, Bennis was actually convicted only for “gross indecency.” That is a charge that any overheated teenage couple parking on Lovers’ Lane could face. The court’s ruling was so broad that even a married couple who stopped on some desolate dead-end street for a quickie (solely for the purposes of procreation) could lose their car.

Rehnquist ruled that since the property had been involved in breaking the law, there was no violation of due process in its seizure. “The government,” Rehnquist decreed, “may not be required to compensate an owner for property which it has already lawfully acquired under the exercise of governmental authority other than the power of eminent domain.” By asserting that the government had already “lawfully acquired” the Bennises’ car simply because it had a law authorizing seizure of the car, Justice Rehnquist basically granted the government unlimited power to steal: if it wants to “lawfully acquire” private property without compensation, all it needs to do is write more confiscatory laws. I lampooned the decision in a Playboy piece titled “Blown Away.”

Later that year, the Clinton administration proposed a law that would entitle the feds to confiscate property involved in violating arcane environmental regulations that were often difficult, if not impossible, to strictly obey. I walloped that  proposal in the Wall Street Journal: “The kind of asset-forfeiture law Mr. Clinton is proposing allows confiscation via accusation: A federal agent need only accuse a person of an illegal act for that person’s house, land, or car effectively to become the property of the federal government.” The feds were seizing property on the basis of mere rumors and gossip — hearsay evidence — and then requiring their victims to provide iron-clad proof of ownership to reclaim their goods. This epitomized how the government slants the playing field against citizens’ rights.

Unfortunately, despite the occasional outrage spurred by seizures from innocent owners, the federal forfeiture juggernaut continues to roll on and ravage more lives. But at least the reporters who chronicled the Supreme Court’s rubberstamped approval of the destruction of property rights are wearing coats and ties.

This article was originally published in the January 2016 edition of Future of Freedom.

This piece is a spinoff from my memoir, Public Policy Hooligan – now available as a Kindle book from Amazon –