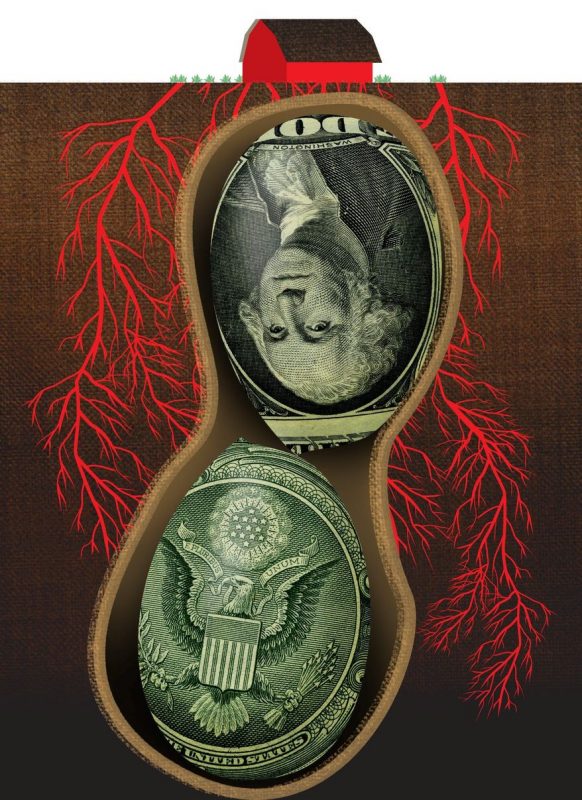 The history of federal peanut policy is the perfect antidote to anyone who still believes that Congress could competently manage a lemonade stand. Federal spending for peanut subsidies will rise eight-fold between last year and next year — reaching almost a billion dollars and approaching the total value of the peanut harvest. This debacle is only the latest pratfall in a long history of horrendous federal mismanagement.

The peanut program long combined the worst traits of feudalism and central economic planning. In 1949, to curtail subsidy outlays, Congress made it a federal crime to grow peanuts for fellow Americans without a federal license. The feds closed off the peanut industry, distributing licenses to existing farmers and prohibiting anyone else from entering the business.

The federal government maintained draconian controls to prevent any unlicensed peanuts from entering Americans’ stomachs. The Washington Post noted in 1993, “USDA employees study aerial photographs to help identify farmers who are planting more than their allotted amount of peanuts. Violators are heavily fined. USDA also issues each farmer a card imbedded with a computer chip that lists his quota. The farmer must present that card before he can sell his peanuts at a buying point.”

The peanut program was created to help save family farms. But the number of peanut farmers plunged by more than 75 percent after the licensing scheme began. The program also sharply decreased productivity since the licenses were long locked into the same area (peanuts are a soil depleting crop). Many farmers sold their licenses to investors. The program sharply inflated the cost of production because most farmers had to rent the license to raise their crop. The General Accounting Office estimated in 1993 that the program cost consumers more than half a billion dollars a year in higher prices.

Strict controls on farmers were complimented by draconian import restrictions. Americans were long permitted to annually buy only 1.7 million pounds of foreign peanuts — roughly two foreign peanuts per year for each American citizen. That quota ended thanks to a 1990s-era trade agreement. Unfortunately, the Clinton administration placated U.S. peanut growers by slapping a 155 percent tariff on peanut butter imports — a sneak attack on the mainstay of freelance writers’ diets. The peanut program guaranteed American farmers prices that are roughly double world market levels, thereby forcing every person who bought a bag of Jumbo goobers to pay tribute to Congress’s favorites

Congress ended the peanut licensing scheme in 2002 with a $4 billion buyout that provided a windfall to license-holders. The largest “peanut buyout” payment went to the John Hancock Insurance Company, which collected $2 million. There was no more justification for “bailing out” peanut license holders than there was for compensating slaveowners after Lincoln’s Emancipation Proclamation but the payouts bred generosity that redounded on congressional candidates.

Congress should have admitted that there was no more justification for subsidizing peanuts than for propping up cashews or pecans — two crops that have thrived without handouts. Instead, Congress created a new subsidy program that was far more generous than other crop subsidy programs. Congress effectively permitted peanut farmers to collect twice as much in federal subsidies as other farmers ($250,000 per year or $500,000 for husband/wife). The 2014 farm bill guaranteed peanut farmers prices that were much higher than have prevailed for most of this century. Peanut subsidies are also pegged at much loftier levels than for most other subsidized crops.

Despite plunging peanut prices, farmers boosted peanut production by more than 20 percent last year. USDA expects to spend up to $50 million a year to store and handle surplus peanuts. Industry experts are warning that there could be insufficient space in federally-licensed warehouses to store the next crop.

USDA is planning to dump more than a million pounds of surplus peanuts on Haiti. This created a firestorm from Haitian and humanitarian activists who fear that it will ravage 150,000 local peanut growers. One of Haiti’s largest rural organizations, the Peasant Movement of Papaye, denounced the peanut donation as “a plan of death” for the country’s farmers. But USDA cares only about getting rid of the evidence of the failure of the peanut program.

The peanut program is typical of the train wreck of farm subsidies. USDA forecasts that spending for farm-commodity programs will increase eightfold from 2015 to 2017. Farm programs are costing far more than forecast in the 2014 farm bill.

Farm programs are the same incorrigible boondoggle now that they were in the 1930s when President Franklin Roosevelt gave dictatorial powers to the secretary of Agriculture. Both Republicans and Democrats have utterly defaulted on their promises to fix this mess. The only solution to the farm problem is to end political control over agriculture.