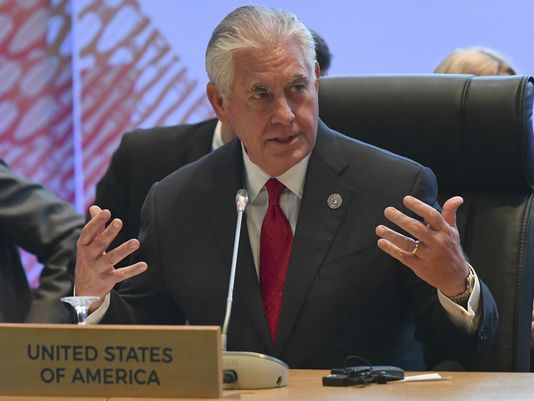 Let’s get our own house in order before we start imposing democracy on others.

The Trump administration’s foreign policy often resembles a Mad Hatter’s Tea Party or a loose cannon on a ship deck. But every now and then, a good idea emerges from the fracas. Such is the case with a reform that could sharply reduce America’s piety exports.

Secretary of State Rex Tillerson is revising the State Department mission statement to focus on promoting “the security, prosperity and interests of the American people globally.” Washington pundits are aghast that “democracy promotion” is no longer trumpeted as a top U.S. foreign policy goal. Elliott Abrams, George W. Bush’s “democracy czar,” complained, “We used to want a just and democratic world, and now apparently we don’t … the message being sent will be a great comfort to every dictator in the world.”

But this is like presuming that any preacher who fails to promise to eradicate sin is a tool of the devil. Instead, it is time to recognize the carnage the U.S. has sown abroad in the name of democracy.

The U.S. has periodically pledged to spread democracy ever since President Woodrow Wilson announced in 1913: “I am going to teach the South American republics to elect good men!” Democracy is so important that the U.S. government refuses to stand idly by when foreign voters go astray. Since 1946, the U.S. has intervened — usually covertly — in more than 80 foreign elections to assist its preferred candidate or party.

In his 2005 inaugural address, President George W. Bush proclaimed that the U.S. would “seek and support the growth of democratic movements and institutions in every nation and culture, with the ultimate goal of ending tyranny in our world.” While Bush’s invocation thrilled Washington, the rest of the world paid more attention to his support for any tyrant who joined his War on Terror.

President Barack Obama was supposed to redeem the honor of U.S. foreign policy. In 2011, Obama portrayed the U.S. bombing of Libya as a triumph of democratic values. After Libyan dictator Moammar Gaddafi was killed, Obama speedily announced that Libyans “now have the opportunity to determine their own destiny in a new and democratic Libya.” But violence spiraled out of control and claimed thousands of victims (including four Americans killed in Benghazi in 2012). Similarly, Obama administration officials invoked democracy to justify arming quasi-terrorist groups in Syria’s civil war, worsening a conflict that killed hundreds of thousands and created millions of refuges.

But the Obama team, like prior administrations, did not permit its democratic pretensions to impede business as usual. After Egyptian protestors toppled dictator Hosni Mubarak, Obama pledged to assist that nation “pursue a credible transition to a democracy.” But the U.S. government disapproved of that nation’s first elected leader, Muslim Brotherhood candidate Mohamed Morsi. After the Egyptian military deposed Morsi in 2013,  Secretary of State John Kerry bizarrely praised Egypt’s generals for “restoring democracy.” Similarly, many Ethiopians were horrified when Obama visited their country in 2015 and praised its regime as “democratically elected” — despite a sham election and its brutal suppression of journalists, bloggers and other critics.

Democracy promotion gives U.S. policymakers a license to meddle almost anywhere on Earth. The National Endowment for Democracy, created in 1983, has been caught interfering in elections in France, Panama, Costa Rica, Ukraine, Venezuela, Nicaragua, Russia, Czechoslovakia, Poland, Haiti and many other nations. The State Department has a long list of similar pratfalls, including pouring vast amounts of money in vain efforts to beget democracy in Iraq and Afghanistan.

Democracy at its best is a wonderful form of government but many so-called democracies nowadays are simply elective despotisms. Elections abroad are often herd counts to determine who gets to fleece the herd. Many democracies have become kleptocracies where governing is indistinguishable from looting.

In some nations, election victories legitimize destroying voters en masse. This is exemplified by the Philippines, where the government has killed 7,000 suspected drug users and dealers, including several mayors. After President Rodrigo Duterte publicly declared that he would be “happy to slaughter” three million drug users, Trump phoned him and, according to a leaked transcript, said, “I just wanted to congratulate you because I am hearing of the unbelievable job [you’re doing] on the drug problem.” Similarly, Trump congratulated Turkish president Recep Erdogan after he won a referendum that awarded him quasi-dictatorial powers.

It is time to admit that America lacks a Midas touch for spreading democracy. Freedom House reported that, even prior to Trump’s election, more than 100 nations have seen declines in democracy since 2005.

Rather than abandoning all moral goals in foreign policy, Washington could instead embrace a strict policy of “honesty in democracy promotion.” Under this standard, the U.S. government would cease trying to covertly influence foreign elections, cease glorifying tinhorn dictators who rigged elections to capture power, and cease bankrolling authoritarian regimes that blight democratic reforms in the bud. But the odds of Washington policymakers abiding by those restraints is akin to the chances that all of Trump’s tweets will henceforth be edifying.

Rather than delivering political salvation, U.S. interventions abroad more often produce “no-fault carnage” (no one in Washington is ever held liable). At a minimum, we should get our own constitutional house in order before seeking to rescue benighted foreigners.  Ironically, many of the same people who equate Trump with Hitler still insist that the U.S. government should continue its political missionary work during his reign.