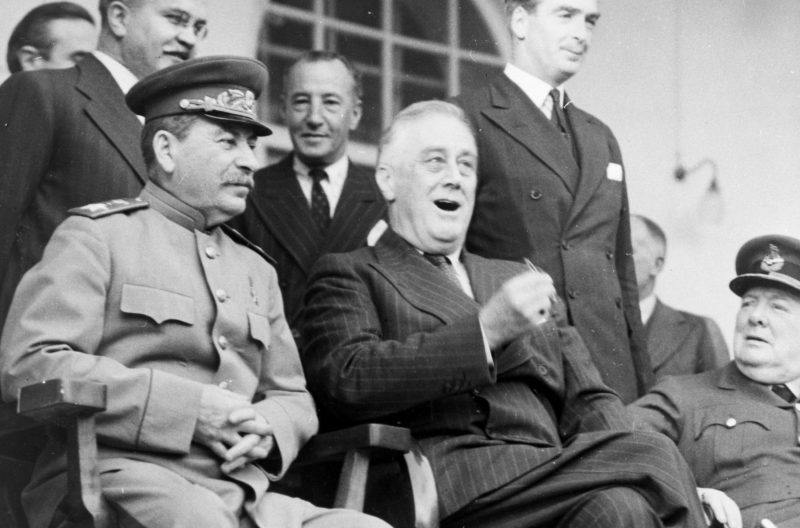 Franklin Roosevelt did more than any other modern president to corrupt Americans’ understanding of freedom. Last week was the 75th anniversary of his 1944 speech calling for a second Bill of Rights to guarantee economic freedom to Americans. Nation magazine whooped up the anniversary, proclaiming that Democrats now have a “unique—and likely fleeting—opportunity to deliver where FDR fell short” with vast new government programs.

The 1944 speech, given as the tide in World War Two was finally turning, was a followup of his 1941 “Four Freedoms” speech which exploited Americans’ rising apprehensions tosee far more power for the government. Roosevelt promised citizens freedom of speech and freedom of worship and then, as if he was merely enumerating other self-evident rights, declared: “The third [freedom] is freedom from want . . . everywhere in the world. The fourth is freedom from fear . . . anywhere in the world.” Proclaiming a goal of freedom from fear meant that government should fill the role in daily life previously filled by God and religion. Politicians are the biggest fearmongers, and “freedom from fear” would justify seizing new power in response to every bogus federal alarm.

FDR’s list was clearly intended as a “replacement set” of freedoms, since otherwise there would have been no reason to mention freedom of speech and worship, already guaranteed by the First Amendment. The “four freedoms” offered citizens no security from the State, since it completely ignored the rights guaranteed in the original Bill of Rights that restricted government power, including the Second Amendment (to keep and bear firearms), the Fourth Amendment (freedom from unreasonable search and seizure), the Fifth Amendment (due process, property rights, the right against self-incrimination), the Sixth Amendment (the right to a speedy and public trial by an impartial jury), and the Eighth Amendment (protection against excessive bail, excessive fines, and cruel and unusual punishments).

And, while Roosevelt pretended to magnanimously recognize a right to freedom of speech, that did not include freedom to dissent: “A free nation has the right to expect full cooperation from all groups…. The best way of dealing with the few slackers or trouble makers in our midst is, first, to shame them by patriotic example, and, if that fails, to use the sovereignty of government to save government.” Roosevelt sounded like James Madison had simply forgotten the asterisk to the First Amendment about using “the sovereignty of government to save government.” FDR’s “new freedom” would justify suppressing anyone who balked at the political ruling class’s latest goals.

Regardless of its authoritarian overtones, FDR’s Four Freedoms doctrine quickly became enshrined, by Norman Rockwell and others, in American political mythology. President George H.W. Bush, speaking on the fiftieth anniversary of the Four Freedoms speech, called FDR “our greatest American political pragmatist” and praised him for having “brilliantly enunciated the 20th-century vision of our Founding Fathers’ commitment to individual liberty.” President Bill Clinton declared in October 1996, “In Franklin Roosevelt’s view, government should be the perfect public system for fostering and protecting the ‘Four Freedoms’ . . . Roosevelt . . . enumerated these freedoms not as abstract ideals but as goals toward which Americans—and caring people everywhere— could direct their most strenuous public efforts.” President George W. Bush invoked Roosevelt’s Four Freedom proclamation in Bush’s most fraudulent speech — his “Mission Accomplished” huff-and-strut aboard the USS Abraham Lincoln in May 2003.

Three years later, in his 1944 State of the Union address , Roosevelt revealed that the original Bill of Rights had “proved inadequate to assure us equality in the pursuit of happiness.” Roosevelt called for a “Second Bill of Rights,” and asserted that: “True individual freedom can’t exist without economic security.” And security, according to FDR, included “the right to a useful and remunerative job,” “decent home,” “good health,” and “good education.” Thus, if a government school failed to teach all fifth graders to read, the nonreaders would be considered oppressed (lawsuits over public school failures in Michigan and elsewhere against local and state governments have relied on similar claptrap). Similarly, if someone was in bad health, then that person would be considered as having been deprived of his freedom, and somehow it would be the government’s fault. Freedom thus required boundless control over health care.

Roosevelt also declared that liberty requires “the right of every farmer to raise and sell his products at a return which will give him and his family a decent living.” In other words, government should inflate food prices high enough to keep the nation’s least efficient farmer behind his mule and plow. But FDR-style freedom also required unlimited federal control over every farmer. At that point, USDA was dictating to every wheat farmer exactly how many acres of the grain they could grow. An Indiana farmer exceeded his quota to grow wheat to feed to his hogs. The Roosevelt administration hounded him all the way to the Supreme Court, claiming it needed a free hand to “suppress … a public evil.” And what was the “public evil”? Wheat surpluses and uppity farmers who failed to kowtow to every USDA bureaucrat.

FDR also proclaimed “the right of every businessman, large and small, to trade in an atmosphere of freedom from unfair competition.” Here was another new freedom that could be secured only by giving bureaucrats unlimited control of the private sector. Two years earlier, Congress enacted the Emergency Price Control Act, which created an Office of Price Administration with sweeping power to set or strike down prices in practically any industry. The act contained no substantive guidelines for the administrator’s decisions but merely required prices that “in his judgment will be generally fair and equitable.” When the Supreme Court upheld the law in 1944, Justice Owen Roberts bitterly dissented that “it is plain that this Act creates personal government by a petty tyrant instead of government by law.” Roberts scoffed at the court’s rubber-stamping of the law as a “solemn farce” because the law was written so that “the courts are unable to say that the Administrator has exceeded the discretion vested in him.”

Pundits and progressives who are whooping up Roosevelt’s Second Bill of Rights almost always ignore perhaps the biggest surprise in that speech. While Roosevelt spoke gaudily of new rights, he scooped George Orwell’s 1984 by revealing that slavery was freedom – or at least “close enough for government work.” FDR urged Congress to enact a “national service law— which for the duration of the war . . . will make available for war production or for any other essential services every able-bodied adult in this Nation.” FDR invoked the “eternally just principle of ‘fair for one, fair for all’” to justify destroying the freedom of every worker in the nation. He promised that this proposal, described in his official papers as a Universal Conscription Act, would be a “unifying moral force” and “a means by which every man and woman can find that inner satisfaction which comes from making the fullest possible contribution to victory.” Presumably, the less freedom people had, the more satisfied they’d become. And anyone who did not feel liberated by federal commands was a bastard who deserved all the misery officialdom heaped upon them.

H.L. Mencken wisely observed, “One horse-laugh is worth ten thousand syllogisms.” Americans are still suffering because Franklin Roosevelt’s freedom bunkum was not immediately laughed off the national stage. Any politician who seeks more power today to bestow more freedom in the distant future deserves all the ridicule Americans can heave his way.

James Bovard is the author of ten books, including 2012’s Public Policy Hooligan, and 2006’s Attention Deficit Democracy. He has written for the New York Times, Wall Street Journal, Playboy, Washington Post, and many other publications.
Twitter