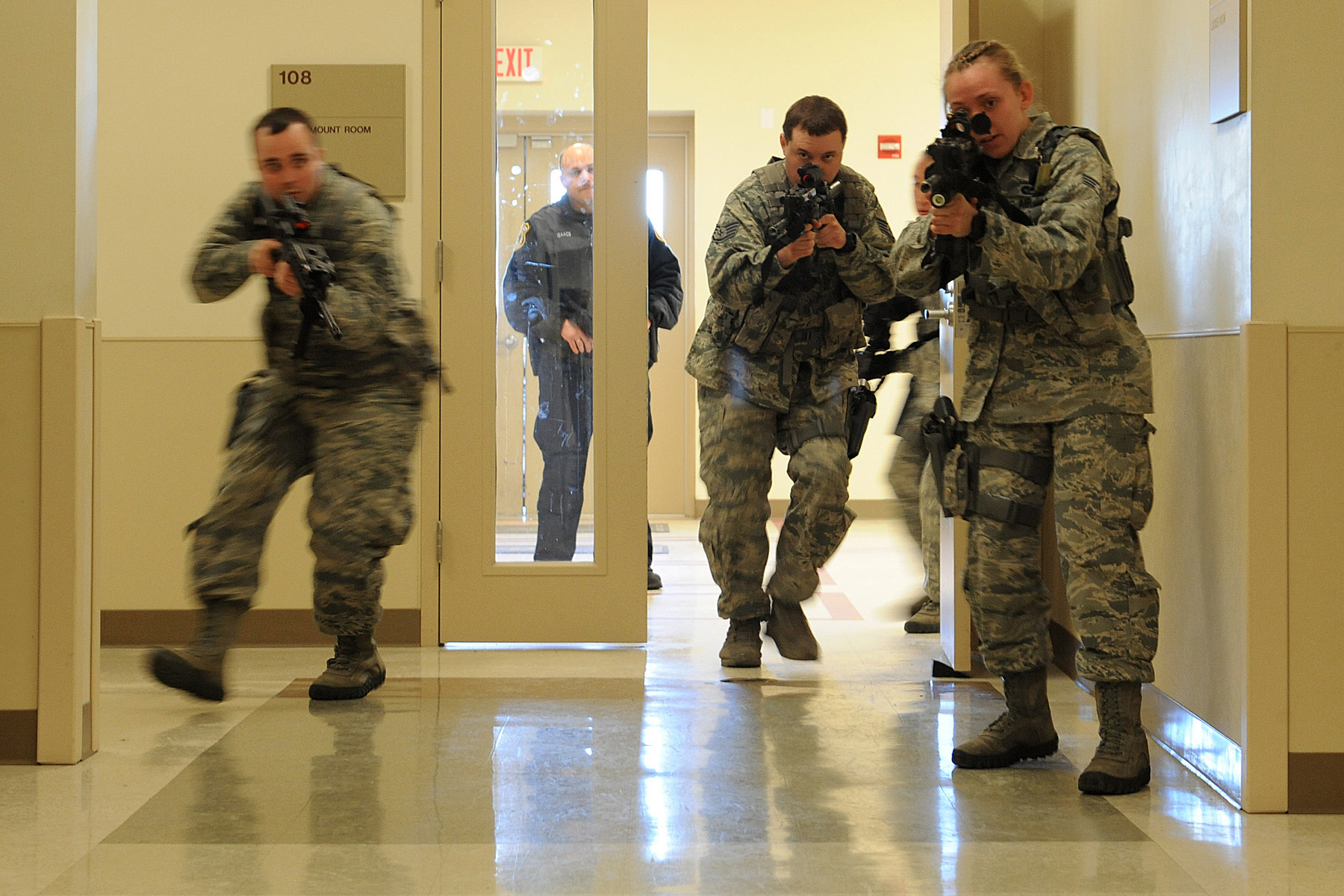 Numerous Indiana elementary school teachers were shot in January as part of a “safe schools” training program. According to the Indiana State Teachers Association, sheriff deputies ordered teachers “into a room four at a time, told them to crouch down and then shot them execution-style with pellets in rapid succession,” leaving several of them bloodied and many of them screaming in terror. The teachers union is “is lobbying lawmakers to add [legislative] language prohibiting teachers from being shot with any sort of ammunition” during school safety drills, according to the Indianapolis Star.

The Indiana program was part of the school lockdown drills occurring across the nation spurred in part by a Colorado massacre that occurred twenty years ago on April 20. Twelve students and one teacher died in a shooting spree by two students at Columbine High School. The Columbine carnage helped inspire subsequent school shootings, especially a Newtown, Connecticut attack in 2012.

While the media is vividly reminding Americans of the Colorado killings, few people remember how the Clinton administration rushed to exploit the killings. Attorney General Janet Reno praised the local police response as “extraordinary” and “a textbook” example of “how to do it the right way.” President Bill Clinton declared that “we look with admiration at the… the police officers who rushed to the scene to save lives.” Clinton invoked the Columbine killings almost every day from April 20 through mid-June 1999, when the House of Representatives narrowly defeated Clinton-championed gun control legislation.

In reality, “No efforts were made to stop the assault,” concluded William Erickson, a former Colorado Supreme Court justice who headed a commission that issued a damning 2001 report on the Columbine killings. Instead, hundreds of police waited outside until long after the two perpetrators had committed suicide.

Appalling police failures turned a multiple homicide into a historic massacre. A SWAT team had entered the building early on but Jefferson County Sheriff John Stone ordered it to withdraw. Police spokesmen said most of the SWAT teams were not sent in “for fear that they might set off a new gunfight,” the New York Times reported. SWAT teams did not enter the room where the killers lay until hours after the shooting stopped. A badly wounded school teacher, Dave Sanders, bled to death because the SWAT team took four hours to reach the room he was in – even though students placed a large sign announcing “1 Bleeding to Death” in the window.

Jefferson County Sheriff John Stone later explained: “We had initial people there right away, but we couldn’t get in. We were way outgunned.” However, SWAT team members had flak jackets and submachine guns – far better protection and weaponry than the unreliable TEC-9 handgun, semiautomatic rifle, and shotguns that the killers touted.

Fears for “officer safety” paralyzed the police response. Steve Davis, spokesman for the Jefferson County Sheriff’s Department, said, “We had no idea who was a victim and who was a suspect. And a dead police officer would not be able to help anyone.” Evan Todd, a Columbine student who was wounded in the initial attack, escaped outside and then explained to a dozen policemen exactly what was happening inside; he was told “to calm down and take my frustrations elsewhere.” After the 2001 report was released, Randy Brown, the father of a Columbine student, scoffed in the Rocky Mountain News: “When children are being murdered… it is important that you establish a perimeter. Do not intervene in the shooting. Officer safety is a priority”?

Unfortunately, law enforcement learned too little from Littleton. At the Parkland school in Florida last year, eight sheriff’s deputies cowered outside while the shooting rampage left 17 dead. A local cop who arrived during the shooting was urged not to enter the building: “Hey, be careful. The guy’s got a rifle,” a deputy told him. After the killings, the local sheriff’s department put out a deluge of false claims that were debunked by later revelations. Nikolas Cruz should have been arrested numerous times because of violence and threats at school and elsewhere but school authorities may have avoided charging him because of an Obama administration school grant program that sought to curb the “school-to-prison” pipeline for minority students. The FBI also dropped the ball despite receiving at least two explicit calls warning about Cruz.

Unfortunately, school safety policies have long been dominated by institutional hysteria fanned by politicians, bureaucrats, and much of the media. The federal Education Department reported last year that “nearly 240 schools … reported at least 1 incident involving a school-related shooting” in the 2015-16 school year. National Public Radio investigated and found that the feds had exaggerated school shootings by twenty-fold; NPR could confirm only 11 incidents. Cleveland was credited with 37 shooting incidents when in reality it was simply a report of 37 schools noting “possession of a knife or a firearm.” One school system was listed as a shooting locale for an incident involving a pair of scissors. But fanning hysteria over school hysteria is mother’s milk for politicians who want to confiscate private firearms.

The #NeverAgain movement that arose after last year’s Parkland shootings ignores how government officials cannot be trusted to behave honestly or responsibly to save student lives. New gun control laws will do nothing to boost either the competence or courage of the police when every second counts. Unfortunately, there is also no cure for the political exploitation of such tragedies.