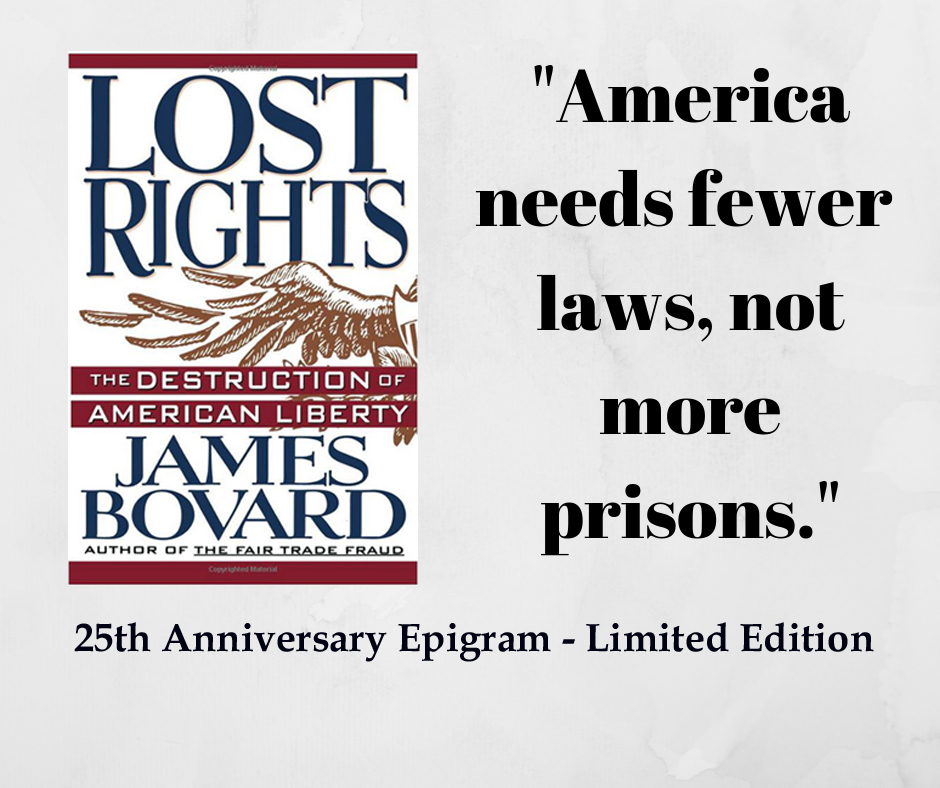 This is the 25th anniversary of the publication of Lost Rights: The Destruction of American Liberty, which  St. Martin’s Press described as a “bestseller” for at least a decade after its release.  Thanks to everyone who bought the book and double-thanks to everyone who whooped it up.  I especially want to thank folks who wrote kindly reviews in newspapers and online venues.

The early 1990s were practically a Golden Age of freedom in some ways compared to what followed after the 9/11 attacks.  I did not foresee torture becoming either institutionalized or fashionable in the new century.   Nor did I expect a president to claim a prerogative to kill American citizens without trial, as Obama did.  Nor was the “era of forever wars” showing up on people’s radar screens in the early years of the Clinton administration.

On the bright side, at least federal wool subsidies have been abolished since Lost Rights was published.

I will be posting other JPEG Limited Edition Epigrams here in the coming days.

Posted below are some of the reviews and comments on the book, mostly from 1994 –

“A remarkable book – 400 densely packed pages about the mounting war on property and contract, the tyranny of taxation, and the growth of federal power in the guise of expanding our rights. In this field, Bovard is surely the leading researcher in the country…. brilliant…” American Spectator

“There may be no more cogent critic of today’s welfare state than journalist James Bovard.. . Lost Rights is his finest work yet. What makes Lost Rights particularly powerful is its comprehensiveness. He documents mind-numbing abuse after abuse.” National Review

“James Bovard’s 1994 book Lost Rights has assembled a great deal of material on just what our law enforcers are up to… as they do daily battle with the Amerian people in their homes and cars, on buses and planes, indeed wherever they can get at them, by hook or by crook or by sting.” Gore Vidal, Vanity Fair

“Lost Rights is an eye-popping compendium of government overreach… The sheer scope of Bovard’s inventory of abuses shows why so many people have finally lost faith in the federal government.” Kansas City Star

“A gold mine.. a virtually bottomless pit of government incompetence, dishonesty or outright repression at all levels.” Washington Times

“Read it to be reminded why eternal vigilance is the price of liberty…. a chilling new book.” Los Angeles Daily News

“Bovard has established himself… as the preeminent exposer of government’s responsibility for rigged deals, under-the-table handouts, special interest ripoffs, and spectacular waste…. The evidence is overwhelming and terrifying.” Reason Magazine

“From the IRS to the EPA to the DEA, Bovard lets no sacred cow graze in peace . . . Bovard pulls away our veil of ignorance and makes visible the dangers of [our] complacence — to ourselves and our children.” –Casper (Wyoming) Star-Tribune

“Lost Rights is a wonderful catalog of the core issues… This is one of the more important books of recent years. I urge you if you are interested in your lost rights and the encroachments on your liberties to read Bovard’s book Lost Rights…” Ron Smith, WBAL-Radio Baltimore

“Lost Rights should be must reading for every law abiding citizen – certainly by people who count liberty as one of the utmost fundamental values for their life.” Mark Davis, WXYT Radio Detroit

“Lost Rights is one of the most important books of the decade. This is a must read. I hope this book is read throughout America.”
–Ray Bream, KABC-Radio, Los Angeles

“I enjoyed the book immensely. I recommend that people get it and read it to understand what is going on in America…. It’s a great book.” Kirby Wilbur, KVI Radio, Seattle

“Seldom if ever have so many egregious acts of government been presented so succinctly as in this book. Readers who suppose that their rights have been secured for them by the law will find this valuable, and, let us hope, provocative.” West Coast Review of Books

“Lost Rights is a very effective ‘libertarian’ indictment of American politics. No agency, bureaucrat, institution, or elected official escapes Bovard’s wrath… There is a point to be made here and Bovard makes it in an entertaining way.” Choice Magazine

“Everyone hails Lost Rights as a brilliant and ‘gloriously inflammatory’ expose of citizens being inexorably crushed by pointless, brutal, and out of control government agencies. Lost Rights is a must read for ever citizen…” Land Rights Letter

Sen. Richard Lugar, R.I.P.
Democracy – More Than Two Wolves and a Sheep Voting for Dinner Around the World