Gerald Ford and the Perversion of Presidential Pardons

In pardoning Nixon, the 38th president opened the floodgates to boundless executive power. 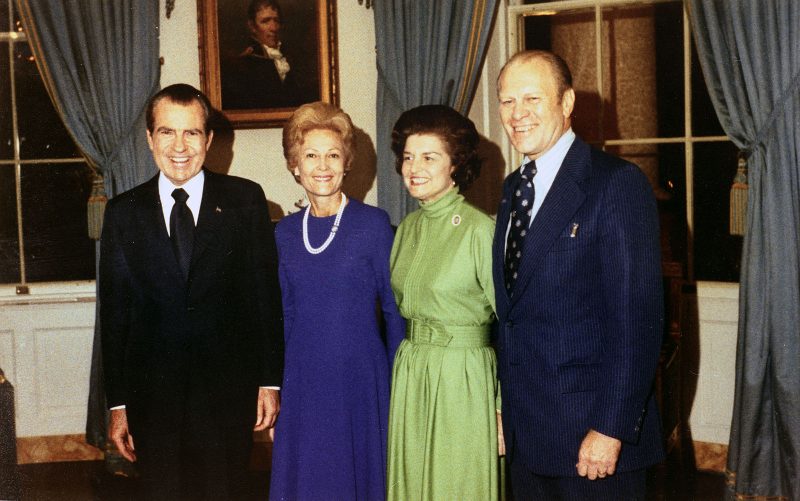 In his final weeks in office, President Donald Trump is outraging the media and many critics with deluges of dubious pardons. Last Tuesday was “No Corrupt Congressman or Iraqi Child Killer Left Behind Day.”  On Wednesday, he pardoned his 2016 campaign chief, Roger Stone,  Jared Kushner’s father (convicted of tax fraud), and dozens of others. Sen. Chris Murphy (D-CT) responded by calling to strip the pardon power from the Constitution: “Once one party allows the pardon power to become a tool of criminal enterprise, its danger to democracy outweighs its utility as an instrument of justice.”

But the potential damage from Trump’s pardons thus far is small potatoes compared to the most damaging pardon in U.S. history issued by one of the Washington establishment’s favorite presidents, Gerald Ford. On September 8, 1974, Ford issued a pardon of former president Richard Nixon that was so sweeping that it practically condemned future generations of Americans to being governed by lawless presidents.

Nixon had resigned the previous month after the House Judiciary Committee had voted to impeach him. The first article of the bill of impeachment focused on Nixon’s involvement in the coverup of the Watergate burglary of the Democratic National Committee headquarters by agents of his Committee to Re-Elect the President.

Ford, in his televised speech to the nation on the pardon on September 8, 1974, repeatedly stressed his devotion to the Constitution and to “equal justice for all Americans.”   Ford lamented that Nixon might have difficulty to “obtain a fair trial by jury in any jurisdiction” and that he “would be cruelly and excessively penalized either in preserving the presumption of his innocence or in obtaining a speedy determination of his guilt in order to repay a legal debt to society.”  In lieu of offering any evidence that Nixon could not get a fair trial, Ford insisted that Nixon’s suffering and fate “deeply troubles every decent and every compassionate person.”  Perhaps most bizarrely, Ford declared that, if Nixon were put on trial, “the credibility of our free institutions of government would again be challenged at home and abroad.”  Perhaps Ford, a career politician, confused placing “free institutions” with “rulers on a pedestal.”

Many people assumed that President Ford pardoned Nixon only for Watergate. In reality, Ford’s pardon was so broad — forgiving Nixon for any and every possible crime he may have committed — that it would have exempted Nixon even from charges of genocide:

Now, therefore, I, Gerald R. Ford, President of the United States, pursuant to the pardon power conferred upon me by Article II, Section 2, of the Constitution, have granted and by these presents do grant a full, free, and absolute pardon unto Richard Nixon for all offenses against the United States which he, Richard Nixon, has committed or may have committed or taken part in during the period from January 20, 1969, through August 9, 1974.

Ford’s pardon closed the book on holding Nixon culpable for his crimes against the Constitution, Americans, and millions of other people around the world. Ford justified his pardon by claiming that criminally prosecuting Nixon would banish “the tranquility to which this nation has been restored by the events of recent weeks.”

But Ford’s action made it easier for subsequent presidents to disturb “tranquility” and practically everything else.  If Nixon had been publicly tried and a full accounting of his abuses made to the American public, it may have been more difficult for subsequent presidents to cover up their crimes. Politicians remembering Nixon’s punishment and humiliation might have been slower to lie the nation into unnecessary foreign wars. If Ford was determined to pardon the man who appointed him Vice President, he should have had the decency to wait until Americans could see the evidence of the abuses committed during Nixon’s reign.  As liberal journalist Matthew Yglesias observed in 2006, Ford’s blanket pardon helped obscure the fact that Nixon “had been spear-heading a broad-based criminal conspiracy aimed at suppressing the anti-war movement and other civil society manifestations of opposition to Nixon’s policies.”

Ford’s pardon proclaimed a new doctrine in American law and politics — that one president can absolve another president for anything and everything.  No wonder that Nixon told interviewer David Frost a few years later that “when the president does it, that means it is not illegal.”  Frost, somewhat dumbfounded, replied, “By definition?” Nixon answered, “Exactly. Exactly.”

Ford’s expansive use of the pardon helped pave the way for George H.W. Bush’s Iran-Contra pardons  which largely demolished the investigation of Independent Counsel Lawrence Walsh. On Christmas Eve 1992, Bush pardoned six Reagan administration officials for their roles in Iran Contra, the illegal arms-for-hostage deal that blighted the final years of the Reagan presidency. Former Defense Secretary Caspar Weinberger was scheduled to go on trial two weeks later on charges of lying to Congress.

Walsh denounced the pardons as part of a “cover-up” and said that they undermined his investigation of possible criminal conduct by Bush himself. Walsh also reported that Bush’s pardons prevented Bush from having to testify in court and face “searching questions” on his own conduct.  Bush’s pardons greatly reduced the likelihood that his co-conspirators would ever turn state’s evidence against him.  The presidential pardons of Walsh’s targets were approved by Attorney General Bill Barr, who resigned as Trump’s Attorney General effective last week but whose recommendations may have had profound influence on the latest and forthcoming Trump pardons.  University of California professor Eric Rauchway declared that Bush’s “pardons did more to enable future criminal presidencies even than Gerald Ford’s pardon of Richard Nixon.”  If Walsh’s investigation had led to Bush’s conviction, the Bush brand name might have been sufficiently damaged that no other Bush could have ascended to the presidency.

President Bill Clinton built on those precedents to issue a deluge of pardons in his final day of office, including for two former cabinet members, his brother Roger, fellow Whitewater operative Susan McDougal (whose silence helped save Clinton), and former congressman Mel Reynolds (convicted of having sex with a 16-year-old campaign volunteer as well as bank fraud and wire fraud).  Slate denounced Clinton’s for fugitive billionaire Marc Rich, who had been indicted for tax evasion, wire fraud, racketeering, and trading with the enemy, as “the most unjust presidential pardon in American history.” Rich’s pardon was facilitated by Deputy Attorney General Eric Holder, who slipped the pardon effort past normal Justice Department checks and balances. Rich’s pardon was supported by the chief of the Anti-Defamation League (after Rich pledged to give $100,000 to the organization), the chairman of the U.S. Holocaust Museum, and many other organizations. Responding to the uproar over that pardon, Clinton justified the pardon in a New York Times op-ed in part due to the lobbying of “many present and former high-ranking Israeli officials of both major political parties,” who stressed Rich’s services to the Mossad. Clinton was indignant at suggestions that Rich’s former wife’s $450,000 contribution to the Clinton presidential library had any influence on the pardon. A congressional investigation concluded that Clinton abused his pardon power by offering “it up to wealthy fugitives whose money had already enabled them to permanently escape American justice. Few other abuses could so thoroughly undermine public trust in government.”

Ford’s former chief of staff,  Dick Cheney, brought the absolutist spirit of Ford’s pardon of Nixon into the George W. Bush administration.  Thirty years after Nixon resigned, White House counsel Alberto Gonzales claimed that the “commander-in-chief” override entitled the president to violate federal law.  That doctrine helped spawn a worldwide torture regime.  After the New York Times finally exposed Bush’s National Security Administration illegal wiretapping regime in late 2005, Bush responded the following month by boasting about his “Terrorist Surveillance Program” in his State of the Union Address and receiving standing ovations from Republicans members of Congress. Bush clearly felt that he was legally untouchable regardless of what he did (though he was smart enough to not brag that he could get away with shooting someone on Fifth Avenue).

President Barack Obama is rarely included in lists of pardon abusers but he and his Attorney General Eric Holder effectively pardoned all the war crimes and other atrocities committed by top Bush administration officials.  Obama promised during his 2008 presidential campaign that he would “immediately review” Bush-era torture crimes because “nobody is above the law.”  Instead, the Obama administration proffered one excuse after another to suppress the vast majority of torture evidence relying on the “State Secrets” doctrine and administrative decrees, as well as throttling all torture-related lawsuits.  The ACLU’s Jameel Jaffer summarized Obama’s policy: “The greater the abuse, the more important it is that it should remain secret.”  Obama and Holder effectively invented a new legal category–“good faith torture”—and summarily ruled that it applied to all U.S. government officials. Thanks to Obama and Holder’s ”get out of jail free” card, former president George W. Bush and former Vice President Dick Cheney could publicly boast in 2010 about having ordered torture.

It is difficult to know what further pardon surprises Trump will spring in his final weeks in office. The New York Times reported earlier this month that Trump has discussed with advisors issuing pardons to his three eldest children and Rudolph Giuliani.  Will he take the audacious step of issuing himself a Gerald-Ford-all-inclusive pardon for all he has done since January 20, 2017?  That might be another “kraken release” that plays as badly as Sidney Powell’s efforts to overturn the election.

Ford’s blanket pardon of Nixon helped turn America into an Impunity Democracy in which rulers pay no price for their misdeeds.  Presidential pardons often preclude truth: the odds of learning the facts about official outrages decline by roughly 98% after the threat of prosecution is removed. While the latest media outrage focuses on who is receiving pardons from Trump, the real danger remains the nearly boundless power of the White House.  When presidents are formally permitted to trample the law, they become the most dangerous criminals in the land.