By Jim on June 1, 2021
At the start of the Biden era, America is being torn apart by more allegations of treason than at any time since the Civil War. Historian Henry Adams observed a century ago that politics “has always been the systematic organization of hatreds.” And few things spur hatred more effectively than tarring all political opponents as traitors.The Founding Fathers carved the Constitution in light of the horrific political abuses that had proliferated in England in prior centuries. That was why there was a narrow definition of treason in the Constitution: “Treason against the United States, shall consist only in levying War against them, or in adhering to their Enemies, giving them Aid and Comfort. No Person shall be convicted of Treason unless on the Testimony of two Witnesses to the same overt Act, or on Confession in open Court.”After the end of Reconstruction, treason charges became relatively rare in American politics. Wars were probably the biggest propellants, with anyone who opposed American intervention abroad being tagged with the scarlet T. But by the late 1960s, when the futility of the Vietnam War was becoming clear, treason charges had largely lost their political clout. Gen. Alexander Haig, who later became Richard Nixon’s last White House chief of staff, denounced the Pentagon Papers as “devastating … a security breach of the greatest magnitude of anything I’ve ever seen … it’s treasonable” But the Nixon administration’s protests failed to sway the Supreme Court to block the New York Times from publishing the secret official records of decades of U.S. government deceit on Indochina.

While Bush was rehabilitated by the mainstream media in recent years as a reward for criticizing Donald Trump, his 2004 reelection campaign relied on tacit treason accusations to tarnish Democrats, liberals, and even a few libertarians. At the 2004 Republican National Convention, keynote speaker Democratic Sen. Zell Miller implied that political opposition was treason: “Now, at the same time young Americans are dying in the sands of Iraq and the mountains of Afghanistan, our nation is being torn apart and made weaker because of the Democrats’ manic obsession to bring down our commander in chief.”

There was no evidence that such criticism of Bush’s foreign policy was ripping America asunder — but trumpeting the accusation made Bush critics appear a pox on the land. Other Republicans used the same theme. John Thune, the Republican U.S. Senate candidate in South Dakota, denounced Senate Minority Leader Tom Daschle: “His words embolden the enemy.” Bush campaign manager Ken Mehlman condemned the Kerry campaign for “parroting the rhetoric of terrorists” and warned, “The enemy listens. All listen to what the president said, and all listen to what Senator Kerry said.” Former New York City Police Commissioner Bernie Kerik, stumping for Bush, told audiences, “Political criticism is our enemy’s best friend.” Six weeks before the 2004 election, the Washington Post noted, “President Bush and leading Republicans are increasingly charging that Democratic presidential nominee John F. Kerry and others in his party are giving comfort to terrorists and undermining the war in Iraq — a line of attack that tests the conventional bounds of political rhetoric.”

In 2006, the New York Times revealed that the Bush administration was illegally seizing personal financial information of millions of Americans. Rep. Peter King (R-N.Y.), chairman of the House Homeland Security Committee, declared, “We’re at war, and for the Times to release information about secret operations and methods is treasonous.” Sen. Jim Bunning (R-Ky.) also labeled the Times guilty of “treason.” Rep. Ted Poe (R-Tex.) suggested that the Times had become the “Benedict Arnold Press.”

After Barack Obama was elected in 2008, treason allegations simmered down, except for occasional allegations that Obama was a secret Muslim scheming to impose Sharia law on America. Former NSA employee Edward Snowden’s leak of NSA documents was the biggest treason boomlet of that era. Numerous congressmen called for Snowden to be charged with treason, though the Founding Fathers neglected to include “embarrassing the government” in the Constitution’s definition of treason. House Intelligence Committee chairman Mike Rogers (R-Mich.) and former NSA chief Michael Hayden publicly joked about putting Snowden on a government kill list.

But the Snowden uproar was a kerfuffle compared to the Pandora’s box opened by the 2016 presidential campaign. Democratic nominee Hillary Clinton repeatedly effectively asserted that Republican nominee Donald Trump was a Russian tool, betraying the nation.

Treason in the White House

After Trump’s surprise victory in November 2016, treason became the coin of the realm for denigrating political opposition. Democratic politicians, activists, and their media allies responded to Hillary Clinton’s surprise defeat by smearing Donald Trump for colluding with Russia. Leaks to the media from the FBI, CIA, and other federal agencies spurred raging controversies that contributed to Trump’s firing FBI chief James Comey. That resulted in the appointment of Robert Mueller as Special Counsel to investigate Trump. Endless wrangling followed, including a claim by prominent Democrats claiming that Republicans would be guilty of treason if they released a memo detailing the FBI’s abuse of the Foreign Intelligence Surveillance Act.

Mueller quickly became sacrosanct; liberals even bought votary candles with his likeness. A piece I wrote for The Hill on Mueller’s lawless record as FBI chief spurred 1,500 comments, including denunciations of me as a treason weasel, bearded grifter, Alt-moron, lackey, lickspittle, and librarian (some folks can’t spell “libertarian”). In April 2019, Mueller finally admitted that there was no substantive evidence of collusion but that did not stop the endless “RussiaGate” refrain and treason accusations from Trump critics. Most of Trump’s presidency was permeated by charges of treason against him.

But the Mueller-induced treason prattle was child’s play compared to what followed disputes over the 2020 presidential election. As law professor Jonathan Turley noted, after the media announced Biden won, “All court challenges [to election results] then became unethical for lawyers and all congressional challenges became sedition for members.” Pennsylvania Attorney General Josh Shapiro this past December denounced one challenge to the election results as a “seditious abuse of the judicial process” that was guilty of “misleading the public about a free and fair election and tearing at our Constitution.” Sen. Chris Murphy (D-Conn.) wailed, “The most serious attempt to overthrow our democracy in the history of our country is under way.” Twitter’s left-wing tilt has helped spur hashtags such as #GOPSeditiousTraitors and #TreasonAgainstAmerica. One leftist activist got 65,000 “likes” when he declared that “Donald Trump should replace Benedict Arnold in history as America’s most reviled traitor.”

On the other side of the political divide, some Republicans sounded equally hellbent on demonizing any opposition to their demands. Republican lawyer Lin Wood declared that Vice President Pence would be guilty of treason for certifying the election results and that he “will face execution by firing squad.” The Pro-Trump duo Diamond and Silk tweeted, “After listening to the leaked call put out by the Washington Post we are convinced that Georgia’s secretary of state and his lawyer need to be arrested for Treason!”

After protesters crashed into the U.S. Capitol on January 6 (some crashed into the building while others sauntered in), treason accusations went into overdrive. The definition of treason was vastly expanded to include members of Congress who filed a lawful challenge against the 2020 electoral tally. House Speaker Nancy Pelosi declared that Republicans who signaled they would not ratify the Electoral College results earlier that month “gave aid and comfort to [protesters] with the idea that they were embracing a lie … that the election did not have legitimacy.” A court of law would never convict Republican members of treason, but Pelosi can convict them in the court of public opinion, thanks to the hanging judges at CNN and MSNBC.

Many Trump opponents are invoking 1861, denouncing any Republican challenges to the election as the same type of treason supposed to have been committed by states that exited the union. But the Civil War illustrates the catastrophic damage that can result from broad-brush definitions of treason. Northern politicians quickly persuaded their supporters that all Southerners were traitors — a capital offense. In 1864, Gen. William Sherman wired the War Department in Washington, “There is a class of people — men, women, and children — who must be killed or banished before you can hope for peace and order.” Union armies in Virginia, Georgia, and elsewhere late in the war intentionally devastated civilian populations who were considered collectively guilty of secession and treason.

Unfortunately, many pundits and politicians know only a fairy-tale version of the Civil War. The fact that Trump had high support in many southern states is spurring bizarre proposals that would be the final coffin nails into any hope for a semblance of peaceful coexistence between Americans with different views and values. Rep. Alexandria Ocasio-Cortez (D-N.Y.), the media’s favorite progressive congresswoman, declared, “The only way our country is going to heal is through the actual liberation of southern states.” She didn’t specify whether she favored the type of military dictatorship that was ended only by a historic compromise after the fraud-ridden 1876 presidential election. Politico, one of the most respected Washington publications, printed a piece titled, “What Ulysses Grant Can Teach Joe Biden about Putting Down Violent Insurrections.” The piece stressed, “Grant’s approach relied on a combination of brute military force and a drastic curtailment of civil liberties, yet it nevertheless has relevance for the current moment.” The article stressed the need for “overwhelming force” to suppress the type of people who violated the sacred space of the U.S. Capitol on January 6.

Any federal attempt to expunge political dissent in America with “brute military force and a drastic curtailment of civil liberties” would very likely provoke a civil war. But that could be the end result of current trends of presuming that political opponents are traitors who must be exterminated. While Democratic members of Congress and some Biden officials are comforted by the thousands of National Guard troops now occupying Washington at their behest, they would be unwise to presume the troops would obey orders to scourge their countrymen in every nook of the land.

Perhaps the ultimate cause of the proliferation of treason accusations is that politicians have captured far too much control over Americans’ lives. The more power politicians seize, the more unhinged political rhetoric becomes.

American politics is increasingly becoming toxic because presidents nowadays are elective dictators. Rather than a process of selecting a chief executive who will uphold the Constitution and enforce the laws, elections nowadays confer a license to run amok over the lives and property of practically anyone who falls under federal sway. Government has amassed so much power that the vast majority of Americans no longer trust Washington.

The surest recipe for curtailing political vitriol is to reduce political power so elections are not demolition derbies that doom losing sides. Thomas Jefferson in 1799 offered the ideal that can rescue America from strife today: “In questions of power, let no more be heard of confidence in man, but bind him down from mischief by the chains of the Constitution.” And if presidents and members of Congress choose to openly scorn their oaths of office and constitutional constraints on their power — well, many Americans would consider that to be treason.

This article was originally published in the April 2021 edition of Future of Freedom.

UPDATE: The piece spurred the artwork below by Tom Blanton, the mastermind of the Project for the Next American Revolution. 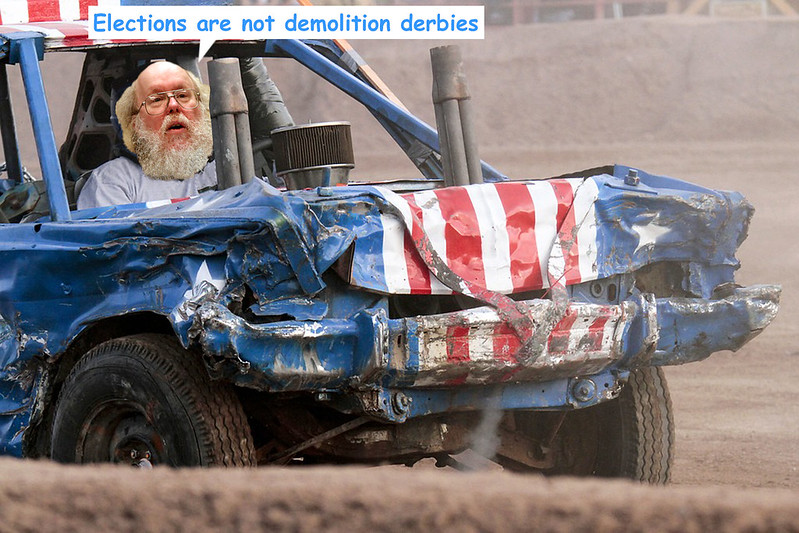