Protectionism Is Immoral, Unjust, and Corrupt

Protectionism is reviving in Washington on both sides of the political aisle. Democrats are cheering proposals to restrict trade to benefit labor unions and save the environment while some Republicans are reviving Smoot-Hawley style salvation schemes. Protectionist advocates routinely seize the moral high ground—at least as it is scored in Washington—by promising that restricting imports will magically produce fair trade.

Thirty years ago, in my book The Fair Trade Fraud (St. Martin’s Press), I sought to drive a wooden stake into both the intellectual and moral pretenses of American protectionism. Obviously, that wooden stake “didn’t take.” So here’s a recap of why government cannot make trade more fair by making it less free. 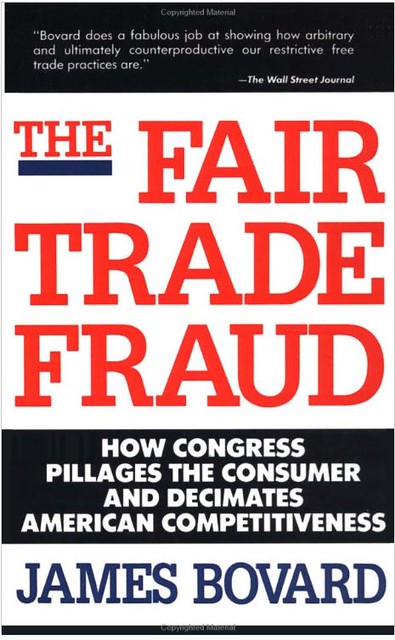 Protectionism produces political corruption, economic stagnation, and international conflict. Yet many people will insist that even though protectionism hinders a nation’s ability to feed, clothe, and house itself, the moral gains from protectionism are greater than the economic losses. But what is the moral core of protectionism? What is the ethical basis for fair trade as it is practiced?

American trade law is dedicated to the pursuit of the just price—but only for imports. Medieval theologian Duns Scotus declared that a price was just when “the owners of things…. preserve equality of value in the things exchanged, according to right reason judging of the nature of the thing exchanged in relation to its human use.” US trade law assumes that imported goods have an objective value in themselves which can be determined in a bureaucratic vacuum thousands of miles from the market where the product is exchanged. The soul of American trade law is that bureaucrats and politicians, not buyers and sellers, are the proper judges of fair value. All the absurdities, biases, and scholastic methods of the US dumping law follow from this principle.

All trade barriers rest upon the moral premise that it is fairer for the US government to effectively force an American citizen to buy from an American company than to allow him to voluntarily make a purchase from a foreign company. US trade policy assumes that the moral difference between an American company and a foreign company is greater than the difference between coercion and voluntary agreement. The choice of fair trade versus free trade is largely one of When is coercion fairer than voluntary agreement?

Every trade restraint is a moral issue of forcibly sacrificing some Americans for the benefit of other Americans. Treasury secretary Robert Walker observed in 1845, “If the marshall were sent by the federal government to collect a direct tax from the whole people, to be paid over to the manufacturing capitalists to enable them to sustain their business, or realize a larger profit, it would be the same in effect as the protective duty.” If a businessman pulls a gun on a customer and demands 20 percent more for a product, that is robbery. If a politician intervenes to the same effect, it is fair trade. As the Supreme Court ruled in 1875, “To lay with one hand the power of the government on the property of the citizen, and with the other to bestow it upon favored individuals to aid private enterprises and build up private fortunes, is none the less a robbery because it is done under the forms of law and is called a taxation.”

Either the government has a valid moral reason for restricting one citizen’s freedom to boost another citizen’s profits, or a trade barrier is unjust. Protectionism means robbing Peter to pay Paul—or, more accurately, robbing a thousand Peters to pay one Paul. Oswald Garrison Villard, then editor of The Nation, observed in 1947, “Every citizen who has sufficient influence to get Congress to interfere with natural trade laws by creating a tariff dam across the currents of international trade, becomes a price dictator to all his fellow citizens.” As Representative James Beck declared in 1884, “The tariff is the protection the wolf gave the lamb.”

Protectionism rests upon a moral glorification of an economy’s least competitive producers. Senator Ernest Hollings (D-SC) announced in 1988, “The market will take care of consumers. The Government must take care of producers. No government was ever organized to get everybody something for a cheap price. The market does that.” (Hollings made this observation in a speech calling for further government suppression of the market.) Protectionists murder the market and then scorn consumers for being orphans.

Fair trade is based on the doctrine that producers have rights and consumers have duties. Fair trade assumes that the consumer’s freedom of choice is an injustice to the producer. The soul of protectionism is that if a company cannot stand on its own two feet, government should force its customers to carry it. Protectionism is an economic no-fault insurance policy: no matter how often an American company crashes in the marketplace, the consumer must pay the bill.

In trade policy, government cannot pick winners without turning everyone else into losers. Every trade barrier constitutes a moral judgment that certain groups of producers, workers, and shareholders will be treated as superior to the rest of society. William Graham Sumner observed in 1888, “The protectionist, instead of ‘creating a new industry,’ has simply taken one industry and set it as a parasite to live upon another.” The government protects the steel industry by sacrificing precision metal makers and agricultural equipment exporters. The government protects five thousand sugar growers by sacrificing the food-manufacturing industries. The government protected a few semiconductor producers by handicapping the computer and electronics industries.

Under U.S. law, voluntary agreements between Americans and foreigners are the test of fairness for some products, while for other products, political dictates determine fairness. Voluntary consent in the 1980s determined how many German Volkswagens Americans bought but dictates from Washington and Tokyo restricted how many Japanese Subarus Americans could buy. The mysterious moral difference between goat cheese and cow cheese required antithetical rules of fairness—letting goat cheese imports be determined by unconstrained wheeling and dealing, while cow cheese imports were determined by presidential proclamations.

Fair trade in practice means a moral and political deification of high prices. American trade law assumes that there are dozens of things that can make an imported product’s price unfairly low, but almost nothing that can make an import’s price unfairly high. US dumping law assumes that American producers are treated unfairly unless a foreign company charges the highest prices in the world to its American customers. The US government has carved out numerous monopolies to benefit a single US company rather than allow foreign competition to lower prices in the US market.

American trade policy presumes that an exchange between an American and a foreign citizen is morally different than trade between two Americans. The fairness of a company’s prices hinges on where imaginary lines were drawn on a map—on some deal cut by long-dead politicians or on how much territory some army conquered centuries earlier. Because Nova Scotia never joined the other British colonies in the 1776–83 revolution, the Commerce Department judged a Canadian company guilty of dumping (selling at an unfairly low price) groundfish in Boston. Because Britain and the United States agreed in 1849 that the forty-ninth parallel would be the boundary between the western United States and Canada, the Commerce Department penalized raspberries from Saskatchewan sold in Seattle. If one company charges different prices in Vancouver, Washington, and Miami, Florida, that is fine. But if another company charges exactly the same different prices in Vancouver, Canada, and Miami, Florida, the US Commerce Department rushes to collect a hundred thousand pages of legalese and economic data to find out what went wrong.

If current trade restrictions embody any notion of fairness, it is a fluke, since fairness had nothing to do with how they were established. The only consistent formula of fair trade is “whatever politicians think best”—or, more accurately, “whatever politicians decree.” For American trade policy, need is the basis of right, and political contributions are the measure of need. The only thing that has morally sanctified most American trade barriers is time—the passage of years that allows people to forget the shameless political scheming that first begot the barrier.

Fair trade means a moral canonization of pure political arbitrariness. The ultimate basis of fair trade is the notion that the state is the fount of justice—that justice is whatever politicians say it is. Fair trade in practice consists of politically anointing a certain number, and then commandeering the machinery of the state to enforce the political dictate. To achieve fair trade requires constant bureaucratic and political manipulation and continual revision of the definition of fairness. The definition of fair trade has become simply trade controlled by politicians and bureaucrats.

“Poorer but nobler” is the implicit motto of fair trade. Protectionist policies are “fair” insofar as high prices are automatically fairer than low prices. Although US trade policy means that Americans have fewer sweaters, coats, and autos, and less cheese and orange juice—America is supposedly somehow a better place because of these trade restrictions. And what is the sole moral achievement of all these protectionist restrictions? That some domestic companies can charge higher prices. That is the only thing most protectionist measures have achieved, and the only thing they will ever achieve.

3 Responses to Protectionism Is Immoral, Unjust, and Corrupt