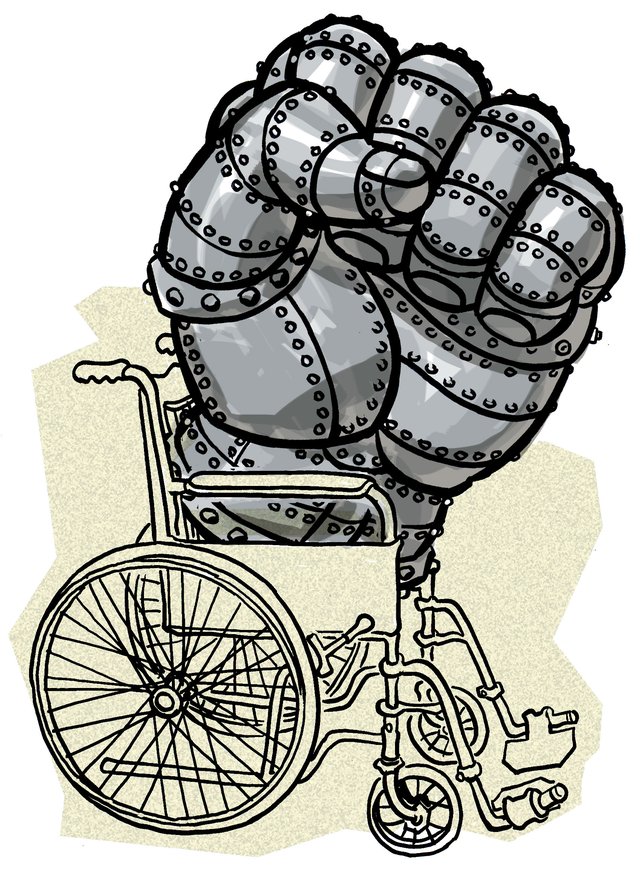 [Illustration by Alexander Hunter for The Washington Times]

This radical personnel change approved by theLabor Department’s Office of Federal Contract Compliance Programs (OFCCP) is pushing a radical personnel policy that could ravage the productivity of more than 170,000 companies with government contracts, including most of America’s largest corporations. Since the 1970s, the OFCCP has done more than any other federal agency to impose racial and gender hiring quotas. But the Obama administration thought the agency was too soft on businesses. OFCCP Director Patricia A. Shiu promised in 2010, “We are going to be extremely proactive and aggressive. … It’s a new day at the OFCCP.”

When Ms. Shiu announced the proposed regulations for the disability hiring quota on Dec. 8, she declared: “For nearly 40 years, the rules have said that contractors simply need to make a ‘good faith’ effort to recruit and hire people with disabilities. Clearly, that’s not working.”

Supposedly, because “good faith” failed, the OFCCP needs a bigger iron fist to threaten contractors. The OFCCP can disbar a company from receiving any federal contracts – a power aptly described by an assistant labor secretary in 1995 as a “nuclear bomb.” In earlier times, OFCCP exploited this arbitrary power to create a “racial spoils system,” as lawyer Peter Kirsanow (now a U.S. Civil Rights Commission commissioner) told me in 1996.

OFCCP’s Federal Register notice on its disability mandate contained more than 53,000 convoluted words. Many businesses and associations are howling that OFCCP has greatly understated the costs of its proposed regime. The American Society of Travel Agents estimated that compliance costs would be at least 40 times higher than OFCCP’s estimate.

As part of the new regulatory regime, OFCCP proposes requiring companies to invite all job applicants to label themselves as “disabled” prior to being hired. The International Food Service Distributors Association scoffed at this mandate: “The only thing that information is going to do is give OFCCP ammunition to challenge the nonhiring of individuals with disabilities who were not qualified to perform the jobs.” Individuals also would be invited to label themselves disabled after being hired, and once a year thereafter. However, self-identification would be unreliable because few people are up to speed on the latest regulatory, statutory and judicial changes in the definition of disability.

OFCCP proposes requiring companies to have a documented, specific reason why each disabled applicant was not hired. In recent cases, the office has treated shortfalls of documentation as proof of discriminatory intent. OFCCP also proposes compelling companies to try to find other positions within their ranks for any disabled applicant not selected for a posted job. The HR Policy Organization, the association of chief human resource officers, complained: “OFCCP’s proposal that disabled applicants must be ‘assisted’ by having contractors assume either an interest or a capability concerning jobs never applied for is paternalistic and only reinforces outmoded stereotypes.” Corporations, instead of looking at applicants’ abilities, will be forced to focus on their disabilities.

Every contractor would be compelled to review and document annually “the physical and mental job qualifications for [every] job opening … and provide an explanation as to why each requirement is related to the job to which it corresponds” and “consistent with business necessity.” OFCCP has a long history of charging companies with discrimination for requiring more ability for a job than federal bureaucrats deemed necessary. The lower the qualifications for a particular job, the more easily the OFCCP can demand that companies hire a less qualified person from one of its favored “protected groups.” (OFCCP is currently attacking companies – such as Colorado’s Leprino Foods – for using widely validated aptitude tests for job applicants because minorities have lower passing rates.)

OFCCP is proposing that contractors achieve 7 percent disabled in each specific job group. The Associated General Contractors of America, a construction industry lobby, complained that many construction craft positions are inherently unsuited to and too perilous for physically disabled applicants. But prudence has not previously deterred the OFCCP. In 1994, OFCCP debarred Kentucky’s Commonwealth Aluminum Corp. from federal contracts for refusing to hire applicants with serious back injuries and hernias for jobs that required heavy lifting. The following year, OFCCP punished an Amarillo, Texas, firm for refusing to hire a man who suffered from uncontrollable epileptic seizures to drive a truck full of hazardous waste. The company also was penalized for refusing to hire applicants with emphysema for jobs that required wearing respirators while doing heavy lifting.

OFCCP claims its latest proposal is not a quota – at the same time it warns contractors that “the primary indicator of effectiveness is whether qualified individuals with disabilities have been hired.” This is the same verbal switcheroo that OFCCP previously used to impose racial hiring quotas on American companies.

There are far better ways to help the handicapped than by empowering a federal agency to make boundless threats on their behalf. Is the OFCCP entitled to destroy business efficiency merely to generate political bragging points for Mr. Obama’s re-election campaign?