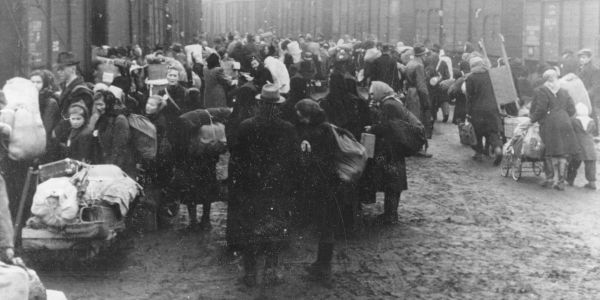 Yale University Press will soon be releasing Orderly and Humane: The Expulsion of the Germans After the Second World War. The author, R. M. Douglas, had an excerpt essay in last week’s Chronicles of Higher Education that is stunning:

Between 1945 and 1950, Europe witnessed the largest episode of forced migration, and perhaps the single greatest movement of population, in human history. Between 12 million and 14 million German-speaking civilians -the overwhelming majority of whom were women, old people, and children under 16 -”were forcibly ejected from their places of birth in Czechoslovakia, Hungary, Romania, Yugoslavia, and what are today the western districts of Poland. As The New York Times noted in December 1945, the number of people the Allies proposed to transfer in just a few months was about the same as the total number of all the immigrants admitted to the United States since the beginning of the 20th century. They were deposited among the ruins of Allied-occupied Germany to fend for themselves as best they could. The number who died as a result of starvation, disease, beatings, or outright execution is unknown, but conservative estimates suggest that at least 500,000 people lost their lives in
the course of the operation.

Most disturbingly of all, tens of thousands perished as a result of ill treatment while being used as slave labor (or, in the Allies’ cynical formulation, “reparations in kind”) in a vast network of camps extending across central and southeastern Europe – many of which, like Auschwitz I and Theresienstadt, were former German concentration camps kept in operation for years after the war. Ironically, no more than 100 or so miles away from the camps being put to this new use, the surviving Nazi leaders were being tried by the Allies in the courtroom at Nuremberg on a bill of indictment that listed “deportation and other inhumane acts committed against any civilian population” under the heading of “crimes against humanity.”

By any measure, the postwar expulsions were a manmade disaster and one of the most significant examples of the mass violation of human rights in recent history. Yet although they occurred within living memory, in time of peace, and in the middle of the world’s most densely populated continent, they remain all but unknown outside Germany itself.

Douglas clearly states that the post-war German “expulsions are in no way to be compared to the genocidal Nazi campaign that preceded them.” But the crimes of the Third Reich did not absolve the post-war abuses by the Allied governments and East European regimes.

Jon Utley’s mother, Frida Utley, did some of the first and most piercing writing on the post-World War Two abuses in Germany. Her pathbreaking work is archived here.

I will write more on this subject in the coming months. [hat tip to Walter Grinder]
James Bovard