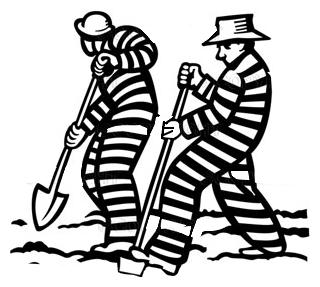 I first recognized the folly of the war on drugs 40 years ago when I was working alongside a convict road gang. As a 16-year-old high school kid toiling in the hot summer sun for the Virginia Highway Department, I saw and heard first-hand some of the victims and the abuses of the newly-launched crackdown on narcotics.

A couple times a week, a bright orange dump truck toting a cage full of convicts from a nearby state prison pulled up to our work site on rural back roads in the Shenandoah Valley. A glowering prison guard with a shaved head and a pump-action shotgun propped against his beer belly waddled out behind the truck as his assistant unlocked the cage.

Prisoners filed out to pick up a shovel or pick as the guard readied to blast anyone who took off running.

There were no restrictions on contact with the convicts as long as you didn’t help them escape. The highway crew worked languidly, so there was plenty of time to hear the jailbirds’ life stories. Some of them were behind bars for savage rampages – like the sullen, Hulk-sized white dude who beat hell out of his girlfriend’s husband. I never aspired to test the boundaries of that guy’s sense of humor.

A few black convicts on the road gang had been busted for drug dealing.

Two years earlier, President Richard Nixon had proclaimed that drugs were “public enemy number one” and that drug use was a “national emergency.” Prosecutors around the nation took the cue and started bagging more narcotics offenders.

I often shot the bull with an amiable mid-20s black guy from Richmond, Va. The colorful bandana stretched across his head trumpeted his disdain for drab prison garb. He admitted to me that he had been a dealer but swore he’d never met the key trial witness who claimed to have bought heroin from him. He didn’t seem particularly bitter about doing time but was convinced the justice system was a crock.

He was already half way through his prison sentence and was counting on getting out early for good behavior. Unfortunately, thanks largely to mandatory minimum laws, the number of drug offenders in prisons rose tenfold between 1980 and 2005, spawning a vast prison industrial complex. More people were locked up for drug offenses than for violent crimes, and possessing trace amounts of cocaine was often punished with longer sentences than rape, murder or child molesting.

Prior to slacking with the highway department, I worked two summers in an orchard. The convict road gang didn’t seem that different from some of the down-and-out guys who sweated for $1.40 an hour to fill metal buckets around their necks with cursedly fuzzy peaches. At least convicts never showed up drunk at the start of the workday. But the judicial system increasingly treated narcotics violators as demons who needed to be scourged, not like human beings who transgressed an arbitrary line between licit and illicit conduct.

Several convicts bragged to me that summer long ago about having access to the best illicit drugs. Government could not even control its own prisons, much less all the street corners in the land. In the following decades, one campaign after another was launched to banish drugs from prisons. In 1999, President Clinton proudly announced an initiative for “zero tolerance for drugs in prison,” plowing more millions into K-9 teams and new drug-detection technologies. That effort was a dismal failure – highlighted spectacularly in the recent indictments spurred by the takeover of a Baltimore prison by the Black Guerilla Gang.

The Obama administration should followup on Holder’s initiative with a vigorous effort to sway Congress to repeal narcotics laws that have pointlessly filled prisons. Too many lives have already been destroyed so that politicians could win votes by appearing to be tough on crime.

One Response to My USA Today piece: Drug Lessons from a Convict Road Gang