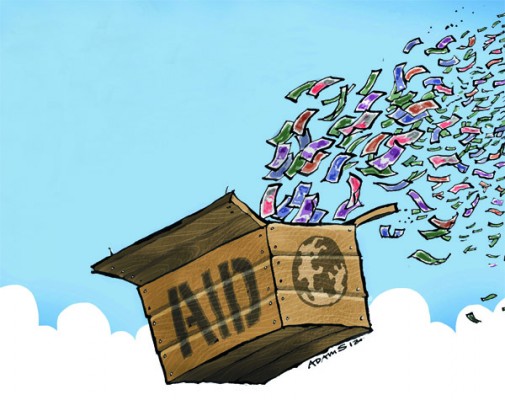 The U.S. government loves to preen about its generosity to the world’s downtrodden. However, a long series of presidents and their tools have scorned the evidence that their aid programs perennially clobber recipients. Nowhere is this clearer than in the sordid history of U.S. food aid.

Food for Peace was devised in 1954 to help dump abroad embarrassingly huge crop surpluses fomented by high federal price supports. The primary purpose of Public Law 480 (in which the program is embodied) has been to hide the evidence of the failure of other farm programs. Although PL-480 sometimes alleviates hunger in the short run, the program disrupts local agricultural markets and makes it harder for poor countries to feed themselves in the long run.

The Agriculture Department (USDA) buys crops grown by American farmers, has them processed or bagged by U.S. companies, and pays lavishly to send them overseas in U.S.-flagged ships. At least 25 percent of food aid must be shipped from Great Lakes ports, per congressional mandate. Once the goods arrive at their destination, the Agency for International Development (USAID) often takes charge or bestows the food on private relief organizations.

In the 1950s and 1960s massive U.S. wheat dumping in India disrupted India’s agricultural market and helped bankrupt thousands of Indian farmers. In 1984 George Dunlop, chief of staff of the Senate Agriculture Committee, speculated that American food aid may have been responsible for the starvation of millions of Indians. The Indian government generated fierce hostility from the U.S. government because of its pro-Soviet leanings in the Cold War. In a secret White House tape in 1971, Richard Nixon declared, “The Indians need — what they really need is a mass famine.” (The story behind Nixon’s deprecation is told in a new book, The Blood Telegram: Nixon, Kissinger, and a Forgotten Genocide, by Gary Bass.) A 1975 General Accounting Office report noted that massive U.S. food aid to India and Indonesia in the 1960s

restricted agricultural growth in those countries by allowing the governments to (1) postpone essential agricultural reforms, (2) fail to give agricultural investment sufficient priority, and (3) maintain a pricing system, which gave farmers an inadequate incentive to increase production.

In 1976 an earthquake hit Guatemala, killing 23,000 people and leaving more than a million homeless. But just prior to the disaster the country had harvested one of the largest wheat crops on record and food was plentiful. Yet the United States dumped 27,000 metric tons of wheat on the country. The U.S. “gift” knocked the bottom out of the local grain markets and made it harder for villages to recover. The Guatemalan government finally had to forbid the importation of any more basic grains.

In 1977 Congress responded to the carnage that Food for Peace wreaked abroad by enacting a requirement (sponsored by Sen. Henry Bellmon of Oklahoma) that compelled USAID and the USDA to certify that food aid would not devastate farmers or destabilize markets in recipient countries. But whom does Uncle Sam entrust to ensure that donations won’t pummel local farmers? In most cases, a foreign government or private relief organization hoping to gain a tremendous free-food windfall from Washington. Cornell professor Christopher Barrett, in his book Food Aid after Fifty Years, noted that “recently a senior U.S. government official remarked privately that ‘Bellmon Analyses are sheer fraud…. No one believes them.’”

In the 1980s, famines and hunger in sub-Saharan Africa were continually in the world news. But few people recognized how U.S. aid programs often made the situation worse. In Somalia a report made by a USAID inspector general concluded, “Nearly all Title I [Food for Peace] food deliveries to Somalia in 1985 and 1986 arrived at the worst possible time, the harvest months, and none arrived at the best time, the critical hungry period. The consensus of the donor community was that the timing of the deliveries lowered farmers’ prices thereby discouraging domestic production.”

In Senegal the Food for Peace program in 1985 and 1986 resulted in the government’s closing down the local rice markets to force the Senegalese to buy American rice that their government had been given. The Senegalese are among the few peoples in the world who prefer broken rice to whole-grain rice, as they feel it better suits their sauces and national dishes. PL-480 does not offer broken rice. Since PL-480 proceeds went straight into the government coffers, Senegalese politicians had an incentive to prohibit the local farmers from selling their own rice in order to dump American rice on the market.

In 2008 USAID began tapping an independent consulting firm, Fintrac Inc., to recommend prudent donation levels. Nevertheless, in 2010 USAID approved sending almost three times as much rice to Liberia as Fintrac recommended. That same year the agency approved massive wheat shipments for Burundi and Sierra Leone, even though Fintrac recommended against it. The USDA is even more reckless. In 2008 it approved sending 30 times more soybean meal to Armenia than the agency’s own staff experts recommended.

In recent decades USAID has permitted recipients to “monetize” U.S. food aid — selling all or part of it in local markets and using the proceeds to bankroll their preferred projects. U.S.-donated food is routinely sold in local markets for much less than prevailing prices. In 2002-03 a deluge of food aid in Malawi caused local corn prices to plunge 60 percent. Mozambique wheat prices nose-dived in 2002 after USAID and the USDA simultaneously “flooded the market,” according to the U.S. Government Accountability Office (GAO). Haitian farmers were similarly whipsawed after the United States and other nations bombarded the island with free food after the 2010 earthquake there.

In a speech last year USAID chief Rajiv Shah called the monetization of food aid “inefficient and sometimes counterproductive,” saying that in some cases “evidence has indicated that this practice actually hurts the communities we seek to help.” Meanwhile, the United Nations Food and Agriculture Organization cautions that monetization often results in “destroying local farm prices” and CARE, one of the world’s largest relief organizations, boycotts all monetization projects. The GAO concluded that “AID and USDA cannot ensure that monetization does not cause adverse market impacts because they program monetization at high volumes, conduct weak market assessments, and do not conduct post-monetization evaluations.”

Former USDA chief economist Robert Thompson observed that “U.S. farmers would scream unfair if USDA gave commodities to charitable organizations to sell into the U.S. market to generate funds to support their Hurricane Katrina recovery projects. That is exactly how farmers in developing countries see monetized food aid, but unlike American farmers, they have little political voice.”

The Obama administration proposed to end monetization and instead give more cash to foreign governments and private relief organizations to buy and distribute food locally and finance preferred projects. Shah said that the proposed reforms would allow U.S. aid to feed up to four million more people per year. The agency also touted a new program to distribute debit cards to allow refugees and others to shop for meals at local stores — similar to how the food-stamp program operates domestically. But the goal should not be to maximize the number of foreigners eating out of the U.S. government’s hand.

Most Americans have the impression that U.S. food relief goes mainly to foreign areas hit by disasters or emergencies. Actually, only a small percentage does. As one congressional staffer told me in 1984, a USAID representative goes into a country, finds an excuse for a project, and then continues it for 15 years, regardless of need or results. Many such programs feed the same people for more than a decade, thereby decreasing permanently the demand for locally produced food and creating an entrenched welfare class. The GAO notes that most “emergency food aid funding” is spent on “multiyear feeding programs” that have produced epidemics of scurvy and beriberi because of the limited food choices.

The Obama administration also proposed to slightly reduce the percentage of U.S. crops purchased and shipped overseas on U.S. flagships. Food for Peace’s cargo-preference subsidies are alleged to be justified to preserve U.S. merchant ships in case of a national emergency. But a Senate Agriculture Committee report concluded, “Rather than encouraging the development of improved U.S. vessels, the program encourages the continued use of semi-obsolete and even unsafe vessels which are of little use for commercial or defense purposes.” Rep. Virginia Smith noted, “Between 1963 and 1983, more than 350 seamen died in major accidents on old ships operating beyond their productive life.” But regardless of its waste and economic irrationality, the cargo preference generates a tidal wave of congressional campaign contributions from the ship owners and the merchant marine union. The Obama administration put little effort behind its reform proposal, which Congress scuttled without further ado.

At the same time that the United States gives food handouts to selected foreign regimes, U.S. agricultural policies since 1933 have sought to drive up world grain prices. Though it is easy for USAID bureaucrats to point to pictures of smiling Third World citizens who received free American food, no one knows how many Africans and Asians have starved to death because they could not afford to buy grains that were more expensive as a result of the U.S. policy. While the United States gave free food to a small percentage of the world’s poor, it made food more expensive for all the world’s poor.

The long history of Washington’s ignoring how food aid ravages foreign farmers proves that Congress, USAID, and the USDA cannot be trusted to intervene in foreign markets. It is time to impose a Hippocratic Oath on foreign-aid programs: First, do no harm.

Image at the top of this post is from an article on the Spectator UK site.