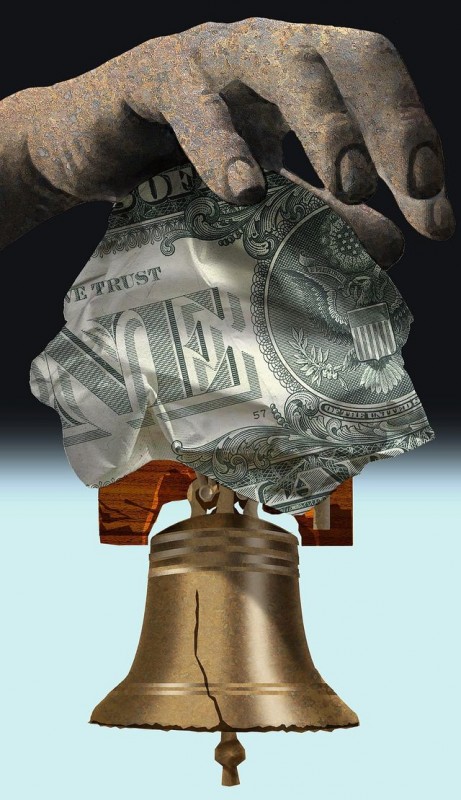 An angry passion for freedom begins to fade

Tea Party protesters and some Republicans are portraying the federal government as a vast engine of oppression. Are anti-Obama activists mistaken in presuming that most Americans still care about freedom, though? A Gallup poll released earlier this month asked a thousand Americans: “Are you satisfied or dissatisfied with your freedom to choose what to do with your life?” Only 21 percent of respondents said they were dissatisfied.

Admittedly, the percentage of Americans who say they don’t have sufficient freedom has more than doubled since the previous Gallup poll on this question in 2006, when only 9 percent complained. That number was surprisingly low, considering the controversies over the Patriot Act and the first round of revelations of National Security Agency illegal wiretaps. The first Obama presidential campaign exploited the Bush administration’s civil liberties record to hype a one-term senator from Illinois as America’s constitutional savior.

Much of the press coverage of this poll has focused on the fact that Americans now rank 36th in the world in their satisfaction with their freedom — lower than Canada, Rwanda and even Uzbekistan. However, comparisons with foreigners’ sentiments masks the profound political changes that have occurred in the American people in recent decades. Jon Clifton, the managing director of the Gallup World Poll, observed, “Certainly the [2006] numbers make sense in terms of our classic self-perception. The recent numbers do not.”

In reality, the biggest mystery from the Gallup poll is why 79 percent of Americans nowadays don’t believe they have a shortage of freedom in their daily lives. Do they like getting molested by the Transportation Safety Administration, harassed by the Internal Revenue Service, and hounded by traffic cops every time they drive down the street? Do folks not recognize the perils of politicians who perennially plot to seize their property, take away their guns, and commandeer them from womb to tomb?

Today’s Americans demonstrate little of their forefathers’ passion for freedom. How many college students would happily permit the government to copy all their email and computer hard drives in return for unlimited free music downloads? How many Wal-Mart gift certificates would it require for a typical citizen to forfeit all his Fourth Amendment rights, entitling government agents to search his car, house and himself whenever they chose without a warrant? How many McDonald’s gift certificates would it take to sway a person to pledge never to publicly criticize the president? How many senior citizens would agree to support the ruling party in perpetuity in return for a 20 percent boost in their Social Security benefits?

Many Americans are more comfortable rattling a tin cup for more benefits than in standing up and denouncing political abuses. Dick Meyer, editorial director of CBSNews.com, observed that voters “see the government like a pharmaceutical company. They feel entitled to cheap if not free access to products and services, they want everything to be risk-free, and they want compensation if something goes wrong. Politicians of both parties have been perfectly willing to pretend the world can work that way.” However, a democracy of caretakers and cage-keepers is irreconcilable with self-government or permitting people to live in ways officialdom disapproves of. As the hysterical reaction to the Supreme Court’s Hobby Lobby decision shows, many Americans are paranoid of any limits on politicians’ power to mandate unearned benefits for them.

Americans’ faltering devotion to freedom has made it easy for politicians to corral them with criminal penalties for a vast array of nonviolent offenses. Country singer Merle Haggard observed: “In 1960, when I came out of prison as an ex-convict, I had more freedom under parolee supervision than there’s available to an average citizen in America right now… . God almighty, what have we done to each other?”

Many citizens are apathetic about their freedom because most of the media continually assure them that big government is nothing to fear. Americans are also encouraged to think that there is practically a law of history that guarantees the triumph of liberty. The long record of hard facts voiding supposed “laws of history” is conveniently forgotten.

The latest variation of the “inevitable triumph of freedom” theme trumpets the fact that the word “libertarian” is no longer banned in polite society inside the Washington Beltway. However, invoking libertarian thinkers such as Friedrich Hayek has not stopped the Federal Reserve from ruining the U.S. dollar. Invoking Milton Friedman does not prevent politicians of both parties from wrecking markets whenever they could reap campaign contributions. And libertarian buzzwords have done nothing to prevent President Obama from proclaiming that he will rule America with his pen and phone, barraging the nation with executive orders of doubtful legality.

A mere change in fashionable political terms will not revive a constitutional system that has been going downhill since the New Deal. It is far easier to enact new government programs than to abolish old abuses. Anyone who doubts that truth should examine the sordid history of federal farm programs. Nor is there any reason to presume that the next president or the next gang of congressional leaders will have any more devotion to freedom than today’s power-hungry rascals.

The recent Gallup poll proves that Americans are far more politically docile than we have been taught to think. It will take more than reciting the Pledge of Allegiance to safeguard our remaining freedoms. Unfortunately, at this point, Americans are showing more enthusiasm for government benefits than for individual liberty.

* Thanks to Alexander Hunter for the excellent illustration.