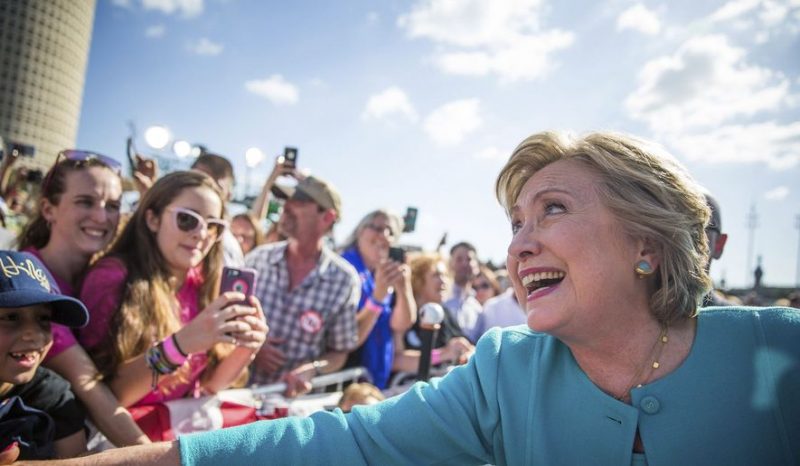 President Obama recently condemned the Republican Party, claiming that its “central principle” is to suppress voting. But, while his administration piously pledges to protect voting rights, it has almost guaranteed that Americans will be blindfolded on Election Day. While the Justice Department will deploy election monitors at polls in 25 states, no one watched Uncle Sam.

Attorney General Eric Holder promised in 2014 that the Justice Department would “ensure that every voter can cast his or her ballot free of intimidation, discrimination or obstruction.” Except when the feds themselves decide to obstruct. The Obama administration is shielding probably the most controversial aspects of Hillary Clinton’s official records as secretary of State. Her undisclosed emails may reveal decisions that provided windfalls to the Clinton Foundation and up to $50 million in speaking fees to her husband.

Democracy is one of America’s most cherished exports. The State Department spends $2.4 billion a year for its “democracy and good governance” programs around the world. In contrast, it budgeted only $33 million this year to respond to Freedom of Information Act (FOIA) requests, despite a torrent of inquiries about Mrs. Clinton’s records. Thus, the State Department is spending more than 70 times as much to spread democracy abroad as it spends supporting the democratic process at home this election year. Overall, the State Department spends almost a thousand times as much on foreign aid as it does on fulfilling its obligations to American citizens for democratic transparency.

There is an old joke that a true friend is someone you can call at 3 a.m. to help you bury a corpse. In Washington, the ultimate proof of friendship is a willingness to destroy or suppress government records. Hillary Clinton has many friends in the Obama administration.

The State Department told the Republican National Committee that it would require 75 years to comply with its FOIA request for emails from Hillary’s top aides. State delayed for more than five years answering a simple request from The Associated Press for a list of Mrs. Clinton’s schedules and meetings as secretary of State. Federal judges and the agency’s inspector general slammed the FOIA stonewalling and foot-dragging. (WikiLeaks is disclosing emails from Clinton campaign manager John Podesta, but has thus far not disclosed Mrs. Clinton’s own emails.)

The Obama administration responded to criticism late last year by appointing a State Department “transparency czar” to speed up FOIA responses. However, the czar was actually a hefty donor to the Clinton presidential campaign and the glacial pace continues. Rep. Jason Chaffetz, a Utah Republican and chairman of the House Oversight and Government Reform Committee, complained last month, “The State Department is using taxpayer money to make sure that this information never gets out to the public.” Justice Department lawyers have provided legal cover for the State Department’s delaying tactics.

In Washington, violating FOIA is considered a victimless crime because it does no harm to the government. On the other hand, the Justice Department zealously challenges any state or local policy or practice that it believes discriminates against would-be voters. In 2012, the department deployed almost 800 federal monitors to 23 states to guard against election irregularities and abuses and will send monitors to 25 states for next month’s election.

In lieu of full disclosure, Mrs. Clinton champions letting anyone and everyone vote. Last year, she condemned voter identification requirements as part of a “sweeping effort to disempower and disenfranchise people of color, poor people and young people.” A Washington Post headline aptly summarized her message: “Hillary Clinton Declares War on Voter ID.” This is the bargain Hillary offers: Voters don’t have to identify themselves and she doesn’t disclose what she did in office.

In an election in which Mrs. Clinton’s personal character and credibility is the key issue for many voters, the Obama administration obliges Americans to blindly trust the president’s favored candidate. But, as Mrs. Clinton noted in a 2012 speech on the perils of corruption, “lack of transparency eats away like a cancer at the trust people should have in their government.”

Suppressing the official record of one of the two major presidential candidates turns American democracy into a covert operation. The 2016 election is akin to a sales contract for a house with many of the settlement provisions blotted out. Regardless of redactions to the “contract with voters,” taxpayers are liable for all the costs for the next four years.

Attorney General Ramsey Clark warned in 1967, “Nothing so diminishes democracy as secrecy.” What is the point of sending out poll watchers across the nation when no one is watching the State Department? What is the point of voting if politicians are permitted to blindfold voters?