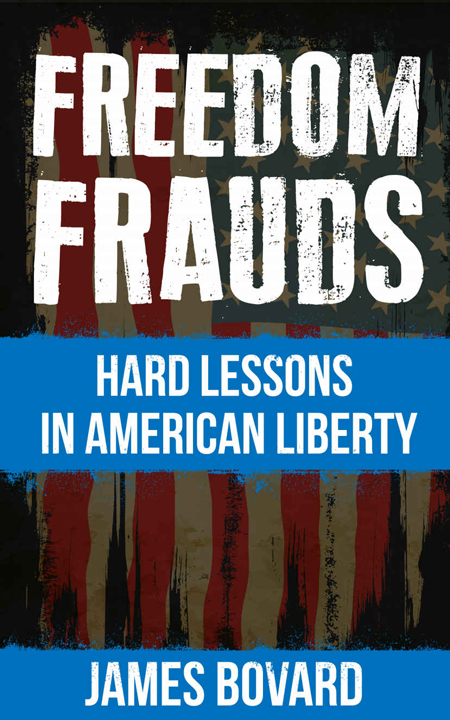 George Leef, a Forbes columnist and the research director at North Carolina’s Martin Center for Academic Renewal, reviewed Freedom Frauds in the new issue of The Future of Freedom.  George wrote:

*”James Bovard has been a thorn in the side of Statists for decades….  Like Mencken, Bovard cuts right through the mind-numbing slogans, deceptions, and outright lies they use to wheedle the support of clueless voters. To read Bovard is to get the antidote for the poison of government propaganda. Once you’ve read him, you can think clearly about the state.”

*”This book demolishes the notion that government — from the local cops to the president of the United States — operates in the public interest.”

*”Bovard never pulls any punches, but arguably his strongest attacks are against politicians who say they are advancing or protecting our freedom, when in fact they are undermining it.”

*”I would love to send every American a copy of Freedom Frauds, but if I could select only one group, I would send it to young people. Let them get a true understanding of the nature of government at an early age — before all the political messaging and deception takes hold of their minds. Guarding against that is the inestimable value of Bovard’s book.”

Thanks very much, George!

Here’s a snippet from the Amazon summary of this Kindle e-book (which, at $2.99, costs less than the price of a good beer – and is available free for reading to AMZ Prime members):

Freedom Frauds is an array of stories from the past decade that might be good for laughing or cussing.

There’s the story of how James Bovard got nailed by the police while searching for donuts, revelations from his long bus ride with a down-and-out-Vietnam War vet, how he learned not to shovel working for the Virginia Highway Department, his ancient transgressions against Boy Scout neckerchief edicts, and the true facts of why he was evicted from the Supreme Court for laughing.

Freedom Frauds also exposes how politicians and the media have hollowed out our liberty over the past century. The Founding Fathers created a Bill of Rights to restrain government coercion of the American people. But succeeding generations of presidents and congressmen scorned the Constitution and sanctified one precedent after another to subjugate citizens to Washington.