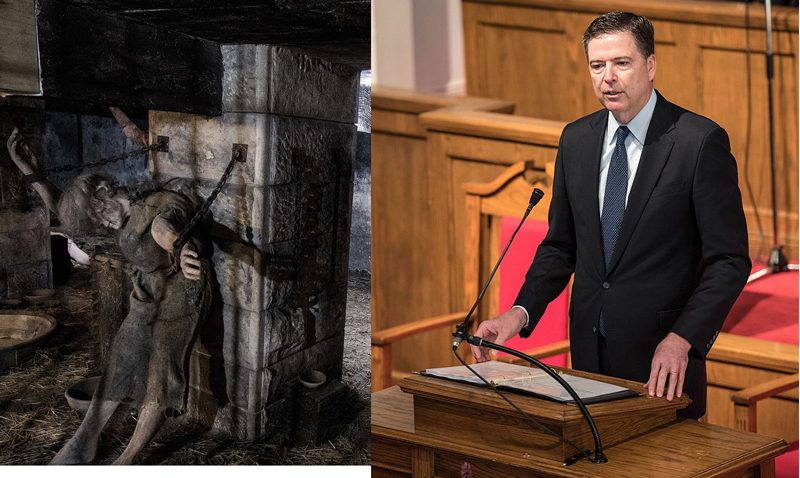 The vast regime of torture created by the Bush administration after the 9/11 attacks continues to haunt America. The political class and most of the media have never dealt honestly with the profound constitutional corruption that such practices inflicted. Instead, torture enablers are permitted to pirouette as heroic figures on the flimsiest evidence.

Former FBI chief James Comey is the latest beneficiary of the media’s “no fault” scoring on the torture scandal. In his media interviews for his new memoir, A Higher Loyalty: Truth, Lies, and Leadership, Comey is portraying himself as a Boy Scout who sought only to do good things. But his record is far more damning than most Americans realize.

Comey continues to use memos from his earlier government gigs to whitewash all of the abuses he sanctified. “Here I stand; I can do no other,” Comey told George W. Bush in 2004 when Bush pressured Comey, who was then Deputy Attorney General, to approve an unlawful anti-terrorist policy. Comey was quoting a line supposedly uttered by Martin Luther in 1521, when he told Emperor Charles V and an assembly of Church officials that he would not recant his sweeping criticisms of the Catholic Church.

The American Civil Liberties Union, Human Rights Watch, and other organizations did excellent reports prior to Comey’s becoming FBI chief that laid out his role in the torture scandal. Such hard facts, however, have long since vanished from the media radar screen. MSNBC host Chris Matthews recently declared, “James Comey made his bones by standing up against torture. He was a made man before Trump came along.” Washington Post columnist Fareed Zakaria, in a column declaring that Americans should be “deeply grateful” to lawyers such as Comey, declared, “The Bush administration wanted to claim that its ‘enhanced interrogation techniques’ were lawful. Comey believed they were not…. So Comey pushed back as much as he could.”

Martin Luther risked death to fight against what he considered the scandalous religious practices of his time. Comey, a top Bush administration policymaker, found a safer way to oppose the worldwide secret U.S. torture regime widely considered a heresy against American values: he approved brutal practices and then wrote some memos and emails fretting about the optics.

Comey became deputy attorney general in late 2003 and “had oversight of the legal justification used to authorize” key Bush programs in the war on terror, as a Bloomberg News analysis noted. At that time, the Bush White House was pushing the Justice Department to again sign off on an array of extreme practices that had begun shortly after the 9/11 attacks. A 2002 Justice Department memo had leaked out that declared that the federal Anti-Torture Act “would be unconstitutional if it impermissibly encroached on the President’s constitutional power to conduct a military campaign.” The same Justice Department policy spurred a secret 2003 Pentagon document on interrogation policies that openly encouraged contempt for the law: “Sometimes the greater good for society will be accomplished by violating the literal language of the criminal law.”

Photos had also leaked from Abu Ghraib prison in Iraq showing the stacking of naked prisoners with bags over their heads, mock electrocution from a wire connected to a man’s penis, guard dogs on the verge of ripping into naked men, and grinning U.S. male and female soldiers celebrating the sordid degradation. Legendary investigative reporter Seymour Hersh published extracts in the New Yorker from a March 2004 report by Maj. Gen. Antonio Taguba that catalogued other U.S. interrogation abuses: “Breaking chemical lights and pouring the phosphoric liquid on detainees; pouring cold water on naked detainees; beating detainees with a broom handle and a chair; threatening male detainees with rape … sodomizing a detainee with a chemical light and perhaps a broom stick, and using military working dogs to frighten and intimidate detainees with threats of attack, and in one instance actually biting a detainee.”

The Bush administration responded to the revelations with a torrent of falsehoods, complemented by attacks on the character of critics. Bush declared, “Let me make very clear the position of my government and our country…. The values of this country are such that torture is not a part of our soul and our being.” Bush had the audacity to run for reelection as the anti-torture candidate, boasting that “for decades, Saddam tormented and tortured the people of Iraq. Because we acted, Iraq is free and a sovereign nation.” He was hammering this theme despite a confidential CIA Inspector General report warning that post–9/11 CIA interrogation methods might violate the international Convention Against Torture.

James Comey had the opportunity to condemn the outrageous practices and pledge that the Justice Department would cease providing the color of law to medieval-era abuses. Instead, Comey merely repudiated the controversial 2002 memo. Speaking to the media in a not-for-attribution session on June 22, 2004, he declared that the 2002 memo was “overbroad,” “abstract academic theory,” and “legally unnecessary.” He helped oversee crafting a new memo with different legal footing to justify the same interrogation methods.

Comey twice gave explicit approval for waterboarding, which sought to break detainees with near-drowning. This practice had been recognized as a war crime by the U.S. government since the Spanish-American War. A practice that was notorious when inflicted by the Spanish Inquisition was adopted by the CIA with the Justice Department’s blessing. (When Barack Obama nominated Comey to be FBI chief in 2013, he testified that he had belatedly recognized that waterboarding was actually torture.)

Comey wrote in his memoir that he was losing sleep over concern about Bush-administration torture polices. But losing sleep was not an option for detainees, because Comey approved sleep deprivation as an interrogation technique. Detainees could be forcibly kept awake for 180 hours until they confessed their crimes. How did that work? At Abu Ghraib, one FBI agent reported seeing a detainee “handcuffed to a railing with a nylon sack on his head and a shower curtain draped around him, being slapped by a soldier to keep him awake.” Numerous FBI agents protested the extreme interrogation methods they saw at Guantanamo and elsewhere, but their warnings were ignored.

Comey also approved “wall slamming” — which, as law professor David Cole wrote, meant that detainees could be thrown against a wall up to 30 times. Comey also signed off on the CIA’s using “interrogation” methods such as facial slaps, locking detainees in small boxes for 18 hours, and forced nudity. When the secret Comey memo approving those methods finally became public in 2009, many Americans were aghast — and relieved that the Obama administration had repudiated Bush policies.

When it came to opposing torture, Comey’s version of “Here I stand” had more loopholes than a reverse-mortgage contract. Though Comey in 2005 approved each of 13 controversial extreme interrogation methods, he objected to combining multiple methods on one detainee.

In his memoir, Comey relates that his wife told him, “Don’t be the torture guy!” Comey apparently feels that he satisfied her dictate by writing memos that opposed combining multiple extreme interrogation methods. And since the vast majority of the American media agree with him, he must be right.

Comey’s cheerleaders seem uninterested in the damning evidence that has surfaced since his time as a torture enabler in the Bush administration. In 2014, the Senate Intelligence Committee finally released a massive report on the CIA torture regime — including death resulting from hypothermia, rape-like rectal feeding of detainees, compelling detainees to stand long periods on broken legs, and dozens of cases where innocent people were pointlessly brutalized. Psychologists aided the torture regime, offering hints on how to destroy the will and resistance of prisoners. From the start, the program was protected by phalanxes of lying federal officials.

When he first campaigned for president, Barack Obama pledged to vigorously investigate the Bush torture regime for criminal violations. Instead, the Obama administration proffered one excuse after another to suppress the vast majority of the evidence, pardon all U.S. government torturers, and throttle all torture-related lawsuits. The only CIA official to go to prison for the torture scandal was courageous whistleblower John Kiriakou. Kiriakou’s fate illustrates that telling the truth is treated as the most unforgivable atrocity in Washington.

If Comey had resigned in 2004 or 2005 to protest the torture techniques he now claims to abhor, he would deserve some of the praise he is now receiving. Instead, he remained in the Bush administration but wrote an email summarizing his objections, declaring that “it was my job to protect the department and the A.G. [Attorney General] and that I could not agree to this because it was wrong.” A 2009 New York Times analysis noted that Comey and two colleagues “have largely escaped criticism [for approving torture] because they raised questions about interrogation and the law.” In Washington, writing emails is “close enough for government work” to confer sainthood.

Comey is likely to go to his grave without paying any price for his role in perpetuating appalling U.S. government abuses. It is far more important to recognize the profound danger that torture and the exoneration of torturers pose to the United States. “No free government can survive that is not based on the supremacy of the law,” is one of the mottoes chiseled into the façade of Justice Department headquarters. Unfortunately, politicians nowadays can choose which laws they obey and which laws they trample. And Americans are supposed to presume that we still have the rule of law as long as politicians and bureaucrats deny their crimes.

++ Thanks to Pixabay for the copyright free torture image.

2 Responses to James Comey and the Bush Torture Scandal