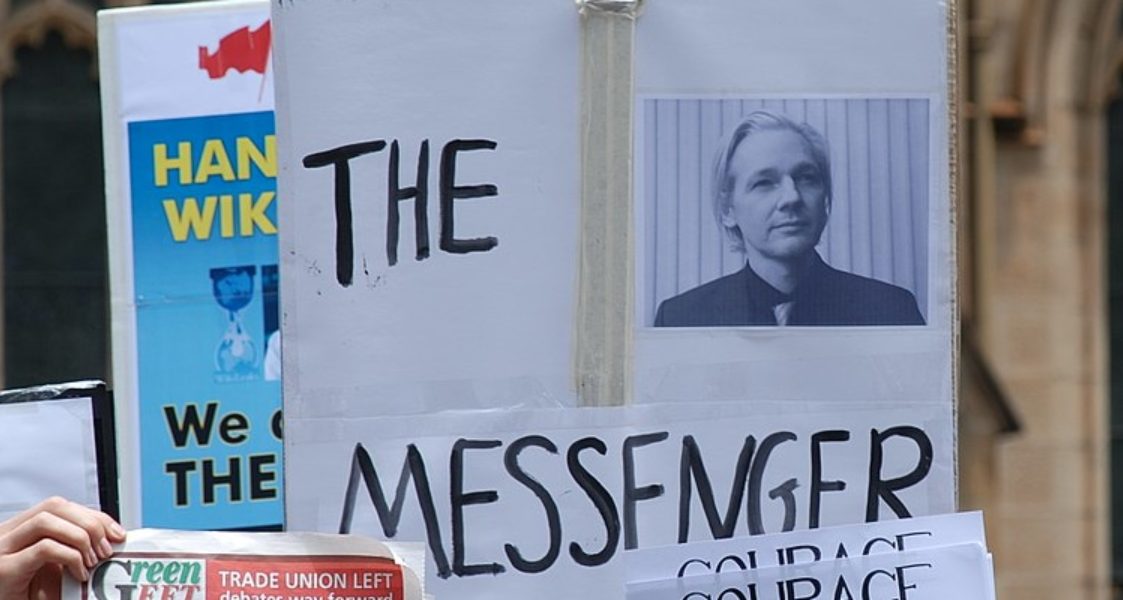 The arrest of Julian Assange has produced rapturous cheering from the American political elite. Hillary Clinton declared that Assange “must answer for what he has done.” Unfortunately, Assange’s arrest will do nothing to prevent the vast majority of conniving politicians and bureaucrats from paying no price for deceiving the American public.

“Truth will out” is a phrase that is routinely recited to keep Americans paying and obeying. Politicians and editorial writers toss this phrase out to simmer down any fears that the government might be conspiring against the people. Actually, “truth will out” is the biggest fairy tale in Washington.

The phrase “truth will out” is first recorded in Shakespeare’s Merchant of Venice. Often in Shakespeare’s plays, truths come out only after almost everyone has been conned, stabbed, or screwed. It’s not much better nowadays.

When it comes to politics, “truth will out” should be confined to sarcasm and satire, not to serious pontificating.

Consider the assassination in 1963 of John F. Kennedy. The Johnson administration rushed the Warren Commission to issue a verdict approving the official story of the killing. But the commission announced that the key records would be sealed for 75 years. Truth would out — but not until all the people involved in the coverup had gotten their pensions and died. In 1992, Congress (responding to the uproar provoked by Oliver Stone’s movie on the assassination) shortened the disclosure schedule, but federal agencies are still conniving to withhold key evidence.

The following year, Johnson was running against Barry Goldwater. Folks were warned back then that if they voted for Goldwater, the United States would get involved in a massive land war in Asia. Well, Johnson won and he dragged the United States into the Vietnam War on the basis of totally false claims about the Gulf of Tonkin incident. The Johnson administration built entire pyramids of lies about that war — actually, they were funeral pyres, not pyramids. As philosopher Hannah Arendt noted, during the Vietnam War “the policy of lying was hardly ever aimed at the enemy but chiefly if not exclusively destined for domestic consumption, for propaganda at home and especially for the purpose of deceiving Congress.” CIA analysts did excellent work in the early period of the Vietnam conflict. But “in the contest between public statements, always over-optimistic, and the truthful reports of the intelligence community, persistently bleak and ominous, the public statements were likely to win simply because they were public,” she observed.

Fast-forward a few decades to 2003. The Bush administration was claiming that Saddam Hussein had weapons of mass destruction and that he was tied to the 9/11 attacks. Both of those charges turned out to be complete hokum — but they were enough to justify dragging the United States into another pointless war against Iraq. A few years later, Defense Secretary Donald Rumsfeld declared, “Ultimately the truth gets out, notwithstanding people’s efforts to the contrary.” For Rumsfeld’s Pentagon, truth was simply another bomb to drop on opponents, at home or abroad. Los Angeles Times columnist William Arkin noted that Rumsfeld’s redesign of military operations “blurs or even erases the boundaries between factual information and news, on the one hand, and public relations, propaganda, and psychological war- fare, on the other.” As reported in the New York Times on May 24, 2006, army officers under Rumsfeld’s command bribed Iraqi journalists to produce favorable newspaper and television reports about U.S. military operations. The campaign was aided by psychological warfare experts authorized to use “doctored or false information to deceive or damage the enemy or to bolster support for American efforts.” The program’s exposure spurred momentary outrage in Washington, after which it resumed on a larger scale.

While some people were shocked by Rumsfeld’s manipulations, he was following hallowed Pentagon traditions. During the 1962 Cuban missile crisis, Assistant Defense Secretary Arthur Sylvester announced, “It’s inherent in [the] government’s right, if necessary, to lie to save itself. News generated by the actions of the government … [are] part of the arsenal of weaponry that a President has.” But, as the Pentagon Papers showed, that weapon cripples citizens’ ability to control their government.

U.S. troops are now fighting in 14 foreign nations: will the Pentagon tell us all about it? The chances are slim and none and, as Dan Rather liked to say, “Slim just left town.” And how about our chances of learning the sordid details surrounding the U.S. government’s dealings with the Saudi regime, despite its atrocities at home and abroad?

For an even bigger pipe dream, when do you think we’ll learn the facts of U.S. policy in Syria? The U.S. government has massively intervened in Syrian civil war since 2011. U.S. policy has always been a tangle of contradictions and absurdities: Pentagon-backed Syrian rebels actively battled against CIA-backed Syrian rebels. Maybe backing both factions guaranteed that the U.S. would be on the eventual winning side? When U.S.-backed rebels launch a chemical-weapons attack on civilians, the U.S. government usually simply ignores it: “Oh those boys.” The New Yorker reported in November that the U.S. military is building up its forces in Syria in preparation for a conflict with Iran. I don’t recall that that issue was on the ballot — or on the radar — for the 2018 congressional midterm elections. Will Donald Trump use secrecy to drag the United States into another pointless Middle East war?

I’ve been an investigative journalist for more than 35 years. I have fought many federal agencies to get the facts of what they are doing. Sometimes I get some dirt, sometimes I get a smoking gun — or a few whiffs — but most government coverups succeed.

I have been using the federal Freedom of Information Act since the early 1980s. This law is supposed to make Americans think the government is transparent — federal agencies are bound by law to reply within 20 business days to requests for documents and other information.

Some years ago, I sent out a bunch of FOIA requests to federal agencies to see what they had in their files about me. The FBI replied that they had nothing — even though FBI chief Louis Freeh publicly condemned my articles on Ruby Ridge. No records? The FBI told a lot of lies about the Randy Weaver case — enough to con much of the media — but they got whupped by a brave Idaho jury. There are some federal agencies that routinely and wrongfully deny FOIA requests, presuming that people are not seriously seeking information until they sue the agency in federal court.

I wrote a lot about trade policy in the 1990s and clashed at times with the Office of the U.S. Trade Representative. I filed a FOIA to get their files on me, including the uproar after I rattled them by acquiring a secret copy of the U.S. tariff code that they had denied existed. Their response came back — “We have no records on Kevin Bovard.” This was not even “close enough for government work,” but it was typical of the charades of disclosure practiced by many agencies.

I have been slamming the Transportation Security Administration for 15 years, so I sent them a FOIA request for their records on me. The TSA chief had publicly condemned an article I wrote in 2014 but their response to my request contained no information on that. Was I supposed to believe that TSA boss John Pistole had typed his retort in an online portal that the newspaper provided, leaving no internal trace?

After a tussle with the TSA at Reagan National Airport back in March, I filed a FOIA request for the videos of that encounter. I have received nothing on that incident and remain sitting on the edge of my chair waiting. Admittedly, I did already whack the TSA on that ruckus in the Los Angeles Times. The Minneapolis Star Tribune reprinted that article with the headline “TSA: the world’s most incompetent agency” — I wonder if that will show up the next time I file a FOIA request with TSA.

Government coverups became a hot issue in November when a Justice Department snafu revealed that the U.S. government had secretly indicted WikiLeaks whistleblower Julian Assange. We do not yet know the specific charges against Assange but the U.S. government has had him in its crosshairs ever since he released scores of thousands of documents exposing U.S. war crimes in Iraq and Afghanistan in 2010. During the 2016 presidential campaign, WikiLeaks released emails from the Democratic National Committee showing that its nominating process was rigged to favor Hillary Clinton. During the final month of the campaign, WikiLeaks disclosed emails from Clinton campaign chief John Podesta. At the same time, the Obama administration had been illegally denying FOIA requests for years that had sought Hillary Clinton’s emails from her four years as secretary of State. But there was no danger that a secret indictment would look into that trampling of the law. The ACLU warned that prosecuting Assange for WikiLeaks’ publishing operations would be “unconstitutional” and would set a “dangerous precedent for U.S. journalists, who routinely violate foreign secrecy laws to deliver information vital to the public’s interest.”

Secretary of State Mike Pompeo has denounced WikiLeaks as a “non-state hostile intelligence service” and labeled Assange a “fraud,” “coward,” and “enemy.” He warned, “To give them the space to crush us with misappropriated secrets is a perversion of what our great Constitution stands for.” But “our great Constitution” never intended for Washington to keep endless secrets from the American people.

If Assange is going to be indicted, it should be for lèse-majesté —which has not formally been a crime in this part of the world since 1776. Any prosecution of Assange would ultimately rest on a presumed divine right for the federal government to deceive the American people. Assange is a heretic to people who believe the feds have a right to be trusted.

Attorney General Ramsey Clark declared in 1967, “Nothing so diminishes democracy as secrecy.” If someone had massively leaked U.S. government documents on Iraq in January 2003, the Bush administration campaign for war might have been thwarted. If Americans had known the full extent of George W. Bush’s torture regime and domestic spying, he might have failed to win reelection in 2004. If Americans had known that Obama’s National Security Agency was illegally vacuuming up their email, he might have gotten tossed out by voters in 2012.

Myths about truth empower liars. The more people assume that truth automatically outs, the easier it becomes to cork it up. Americans must realize that they will not receive even token disclosures without whistleblowers, journalists, and activists vigorously fighting the political-bureaucratic system.

This article was originally published in the February 2019 edition of Future of Freedom.

2 Responses to Washington’s Biggest Fairy Tale: Truth Will Out