FBI entrapment is huge issue in Gov. Whitmer kidnapping trial today in Michigan. Outrageous entrapment schemes have multiplied since I did this 1995 horror story round-up for Playboy. Text below the JPEG 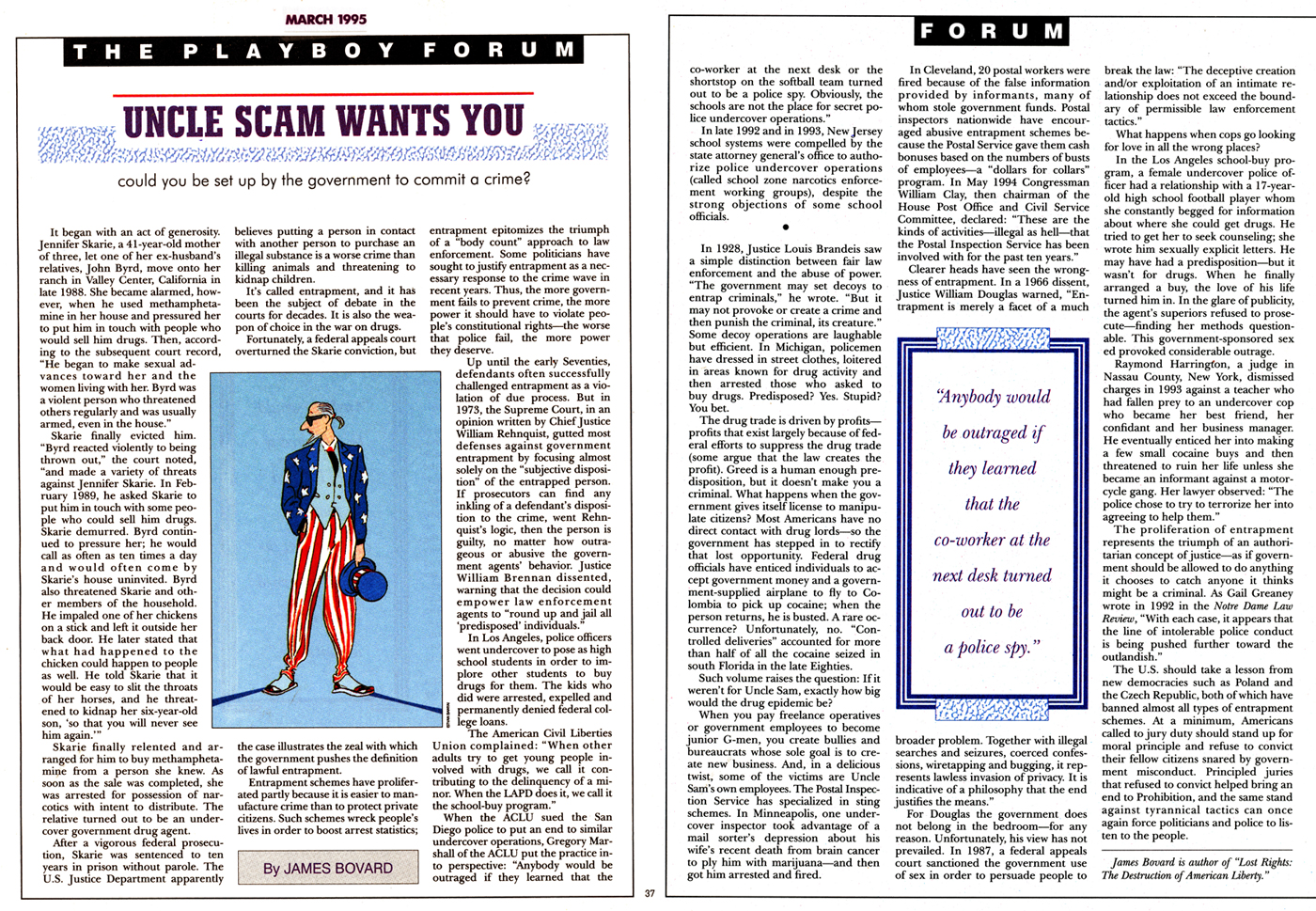 Uncle Scam wants you: could you be set up by the government to commit a crime? The Playboy Forum; Column

Could you be set up by the government to commit a crime?

It began with an act of generosity. Jennifer Skarie, a 41-year-old mother of three, let one of her ex-husband’s relatives, John Byrd, move onto her ranch in Valley Center, California in late 1988. She became alarmed, however, when he used methamphetamine in her house and pressured her to put him in touch with people who would sell him drugs. Then, according to the subsequent court record, “He began to make sexual advances toward her and the women living with her. Byrd was a violent person who threatened others regularly and was usually armed, even in the house.”

Skarie finally evicted him. “Byrd reacted violently to being thrown out,” the court noted, “and made a variety of threats against Jennifer Skarie. In February 1989, he asked Skarie to put him in touch with some people who could sell him drugs. Skarie demurred. Byrd continued to pressure her; he would call as often as ten times a day and would often come by Skarie’s house uninvited. Byrd also threatened Skarie and other members of the household. He impaled one of her chickens on a stick and left it outside her back door. He later stated that what had happened to the chicken could happen to people as well. He told Skarie that it would be easy to slit the throats of her horses, and he threatened to kidnap her six-year-old son, ‘so that you will never see him again.'”

Skarie finally relented and arranged for him to buy methamphetamine from a person she knew. As soon as the sale was completed, she was arrested for possession of narcotics with intent to distribute. The relative turned out to be an undercover government drug agent.

After a vigorous federal prosecution, Skarie was sentenced to ten years in prison without parole. The U.S. Justice Department apparently believes putting a person in contact with another person to purchase an illegal Substance is a worse crime than killing animals and threatening to kidnap children.

It’s called entrapment, and it has been the subject of debate in the courts for decades. It is also the weapon of choice in the war on drugs.

Fortunately, a federal appeals court overturned the Skarie conviction, but the case illustrates the zeal with which the government pushes the definition of lawful entrapment.

Entrapment schemes have proliferated partly because it is easier to manufacture crime than to protect private citizens. Such schemes wreck people’s lives in order to boost arrest statistics; entrapment epitomizes the triumph of a “body count” approach to law enforcement. Some politicians have sought to justify entrapment as a necessary response to the crime wave in recent years. Thus, the more government fails to prevent crime, the more power it should have to violate people’s constitutional rights–the worse that police fail, the more power they deserve.

Up until the early Seventies, defendants often successfully challenged entrapment as a violation of due process. But in 1973, the Supreme Court, in an opinion written by Chief Justice William Rehnquist, gutted most defenses against government entrapment by focusing almost solely on the “subjective disposition” of the entrapped person. If prosecutors can find any inkling of a defendant’s disposition to the crime, went Rehnquist’s logic, then the person is guilty, no matter how outrageous or abusive the government agents’ behavior. Justice William Brennan dissented, warning that the decision could empower law enforcement agents to “round up and jail all ‘predisposed’ individuals.”

In Los Angeles, police officers went undercover to pose as high school students in order to implore other students to buy drugs for them. The kids who did were arrested, expelled and permanently denied federal college loans.

The American Civil Liberties Union complained: “When other adults try to get young people involved with drugs, we call it contributing to the delinquency of a minor. When the LAPD does it, we call it the school-buy program.”

When the ACLU sued the San Diego police to put an end to similar undercover operations, Gregory Marshall of the ACLU put the practice into perspective: “Anybody would be outraged if they learned that the co-worker at the next desk or the shortstop on the softball team turned out to be a police spy. Obviously, the schools are not the place for secret police undercover operations.”

In late 1992 and in 1993, New Jersey school systems were compelled by the state attorney general’s orifice to authorize police undercover operations (called school zone narcotics enforcement working groups), despite the strong objections of some school officials.

In 1928, Justice Louis Brandeis saw a simple distinction between fair law enforcement and the abuse of power. “The government may set decoys to entrap criminals,” he wrote. “But it may not provoke or create a crime and then punish the criminal, its creature.” Some decoy operations are laughable but efficient. In Michigan, policemen have dressed in street clothes, loitered in areas known for drug activity and then arrested those who asked to buy drugs. Predisposed? Yes. Stupid? You bet.

The drug trade is driven by profits–profits that exist largely because of federal efforts to suppress the drug trade (some argue that the law creates the profit). Greed is a human enough predisposition, but it doesn’t make you a criminal. What happens when the government gives itself license to manipulate citizens? Most Americans have no direct contact with drug lords–so the government has stepped in to rectify that lost opportunity. Federal drug officials have enticed individuals to accept government money and a government-supplied airplane to fly to Colombia to pick up cocaine; when the person returns, he is busted. A rare occurrence? Unfortunately, no. “Controlled deliveries” accounted for more than half of all the cocaine seized in south Florida in the late Eighties.

Such volume raises the question: If it weren’t for Uncle Sam, exactly how big would the drug epidemic be?

When you pay freelance operatives or government employees to become junior G-men, you create bullies and bureaucrats whose sole goal is to create new business. And, in a delicious twist, some of the victims are Uncle Sam’s own employees. The Postal Inspection Service has specialized in sting schemes. In Minneapolis, one undercover inspector took advantage of a mail sorter’s depression about his wife’s recent death from brain cancer to ply him with marijuana–and then got him arrested and fired.

In Cleveland, 20 postal workers were fired because of the false information provided by informants, many of whom stole government funds. Postal inspectors nationwide have encouraged abusive entrapment schemes because the Postal Service gave them cash bonuses based on the numbers of busts of employees–a “dollars for collars” program. In May 1994 Congressman William Clay, then chairman of the House Post Office and Civil Service Committee, declared: “These are the kinds of activities–illegal as hell–that the Postal Inspection Service has been involved with for the past ten years.”

Clearer heads have seen the wrongness of entrapment. In a 1966 dissent, Justice William Douglas warned, “Entrapment is merely a facet of a much broader problem. Together with illegal searches and seizures, coerced confessions, wiretapping and bugging, it represents lawless invasion of privacy. It is indicative of a philosophy that the end justifies the means.”

For Douglas the government does not belong in the bedroom–for any reason. Unfortunately, his view has not prevailed. In 1987, a federal appeals court sanctioned the government use of sex in order to persuade people to break the law: “The deceptive creation and/or exploitation of an intimate relationship does not exceed the boundary of permissible law enforcement tactics.”

What happens when cops go looking for love in all the wrong places?

In the Los Angeles school-buy program, a female undercover police ofricer had a relationship with a 17-yearold high school football player whom she constantly begged for information about where she could get drugs. He tried to get her to seek counseling; she wrote him sexually explicit letters. He may have had a predisposition–but it wasn’t for drugs. When he finally arranged a buy, the love of his life turned him in. In the glare of publicity, the agent’s superiors refused to prosecute–finding her methods questionable. This government-sponsored sex ed provoked considerable outrage.

Raymond Harrington, a judge in Nassau County, New York, dismissed charges in 1993 against a teacher who had fallen prey to an undercover cop who became her best friend, her confidant and her business manager. He eventually enticed her into making a few small cocaine buys and then threatened to ruin her life unless she became an informant against a motorcycle gang. Her lawyer observed: “The police chose to try to terrorize her into agreeing to help them.”

The proliferation of entrapment represents the triumph of an authoritarian concept of justice–as if government should be allowed to do anything it chooses to catch anyone it thinks might be a criminal. As Gail Greaney wrote in 1992 in the Notre Dame Law Review, “With each case, it appears that the line of intolerable police conduct is being pushed further toward the outlandish.”

The U.S. should take a lesson from new democracies such as Poland and the Czech Republic, both of which have banned almost all types of entrapment schemes. At a minimum, Americans called to jury duty should stand up for moral principle and refuse to convict their fellow citizens snared by government misconduct. Principled juries that refused to convict helped bring an end to Prohibition, and the same stand against tyrannical tactics can once again force politicians and police to listen to the people.

James Bovard is author of “Lost Rights: The Destruction of American Liberty.”