UPDATE:  Counterpunch reposted this essay on June 26 and LewRockwell.com posted it on the 28th. Reason.com’s J.D. Tuccille discussed the piece in an article on the Hit & Run blog,  and a couple folks at LewRockwell.com blog kindly gave it a plug. EconomicPolicyJournal also posted a big chunk of it.   I appreciate all the comments and the bevy of links coming in from Facebook, Twitter,  and elsewhere. ********* 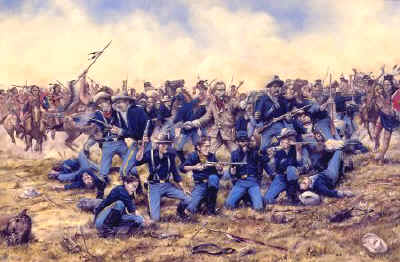 George Custer led his 7th Cavalry regiment to their demise in Montana.  The Battle of Little Big Horn was one of the biggest defeats suffered by the U.S. Army in the war against the Indians.   It is only in recent years that proper attention has been paid to the role of atrocities by Custer and other military leaders in stirring up the wrath of oppressed Indians.

I visited the Little Big Horn Battlefield National Monument 45 years ago during a cross-country trip as a 12-year-old boy to a Boy Scout Jamboree in Idaho. Like most Scouts, I subscribed to the Patriotic Version of American History. After visiting the battlefield, I scribbled (or copied) a note that the Seventh Cavalry’s “heroic defense made the nation yearn for details that no white man lived to tell.” Many years later, I learned that Custer’s men were wiped out in part because the Army Quartermaster refused to permit them to carry repeating rifles – which supposedly wasted ammo. The Indians didn’t have a quartermaster, so they had repeating rifles, and the rest is history. 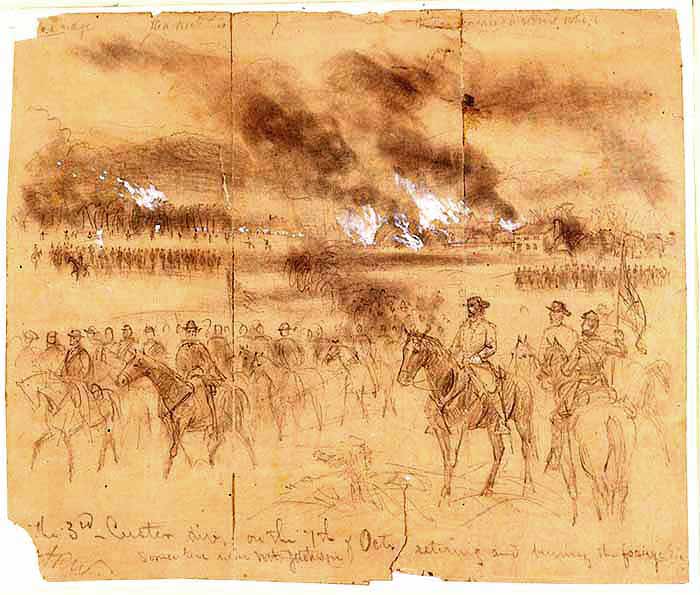 Custer also played a leading role in the 1864 desolation of the Shenandoah Valley, where I was raised a century later. After failing to decisively vanquish southern armies in the battlefield, Lincoln and his generals decided to win the war by brutalizing civilians. In August  1864, Gen. U.S. Grant  ordered  the destruction of all the barns, crops, and livestock in the Shenandoah Valley.  The etching to the left shows his troops after torching much of the town of Mt. Jackson, Virginia.  The population of Warren County, my home county, fell by 11% during the 1860s. Did anyone who refused to submit to Washington automatically forfeit his right to live?  The desolation from the war and the systemic looting in its aftermath (ironically labeled “Reconstruction”) helped keep the South economically prostrate for generations.

During the 1864 campaign, Custer was under the command of Gen. Phil Sheridan.  Sheridan later became notorious for slaughtering Indians as a top commander out west.  He is best known for telling an Indian chief in 1869: “The only good Indian is a dead Indian.”  He apparently felt the same way about Southerners – or at least “secessionists” and their wives and children.

Sheridan’s campaign to starve Shenandoah Valley residents into submission evoked fierce opposition from the  guerillas led by Col. John S. Mosby, the “Grey Ghost of the Confederacy.” Late in the war, when Confederate armies were being trounced or pinned down everywhere, a few hundred Mosby partisans tied up ten thousand Yankees. Mosby suffered none of the Sir Walter Scott-style sentimentality that debilitated many Southern commanders. Instead of glimmering sabers, his men carried a pair of .44 caliber revolvers. There was so much fear of Mosby that the planks on the bridge across the Potomac were removed each night, for fear that he would raid the capital. Reading about him as a boy,  I was impressed how a few well-placed attacks could throw the entire government into a panic. (Herman Melville captured the dread that northern troops had of Mosby in his epic poem, A Scout to Aldie.)

Mosby’s men were vastly outnumbered but they fought valiantly to try to stop Sheridan’s torching of the valley.   Sheridan responded by labeling Mosby’s men war criminals and announcing that they would be executed if captured.  The North stretched the definition of illegal enemy combatant at the same time it redefined its own war crimes out of existence.  Six of Mosby’s men were hung in Front Royal, Virginia in September 1864.

In the weeks after the hanging of his men, Mosby’s men captured 700 northern troops.  In early November, his troops hanged several captured Yankees in retaliation.  A sign was attached to one of the corpses: “These men have been hung in retaliation for an equal number of Colonel Mosby’s men, hung by order of General Custer at Front Royal.  Measure for measure.”  Recognizing the perils to his own troops, Sheridan ceased executing captured Mosby’s guerillas.

Unfortunately, most of the war crimes of the Civil War have been forgotten in the rush to sanctify a pointless vast loss of lives.  Recasting the war as a triumph of good over evil was an easy way to make atrocities vanish.  And failing to recognize the true nature of that war lowered Americans’ resistance to politicians commencing new wars that promised to vanquish evil once and for all.

For more discussion of my two cents on the Civil War, check the memoir essays in Public Policy Hooligan.